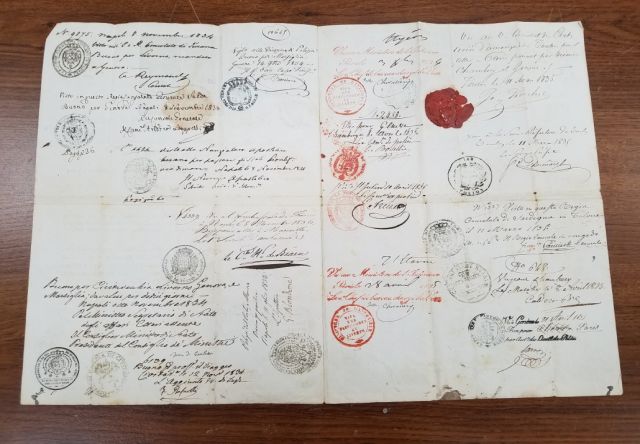 Maryland’s fourth bishop, William R. Whittingham, became rector of St. Luke’s Church, New York City, on October 1, 1831, at the age of 26. He had married Hannah Harrison the previous year, and his son Edward was six months old when he moved into the rectory. The Whittingham’s first daughter Mary came along just a year later, and the new rector was busy editing six volumes of standard written works of Christianity, as well as his duties as rector. Unwell with lung and throat ailments which would dog him throughout his life, Whittingham took his wife and small children to Orange, New Jersey, Hannah’s home, to rest and recover in April of 1834. On son Edward’s third birthday, April 22, 1834, Whittingham’s little daughter Mary died, leaving Whittingham despondent and more ill. The Sunday after her burial, two members of St. Luke’s vestry approached their rector with news from his physician, saying that he must stop all work or die of consumption, the old term for tuberculosis. After consulting a specialist who diagnosed Whittingham with chronic bronchitis which would deteriorate into consumption if he did not stop all work immediately and take months in a warm, dry climate, Whittingham resigned St. Luke’s. The vestry generously promised him his full salary through July, and $400 annually for two years, as well as $500 for expenses for the journey. That day, Whittingham saw an advertisement for a vessel ready to sail for Gibraltar, contacted his brother-in-law John van Ingen to secure his services as assistant and companion, and made arrangements to leave immediately. The brig, “William Tell” left New York on May 31, with Whittingham and van Ingen aboard; they would not return for fifteen months. While in Sicily, Whittingham received word that his wife had given birth to a daughter, whom they named Mary, in loving memory of their first dear girl, and his dark sadness began to abate. On his return to New York, he was no longer broken down by ill health, overwork and personal tragedy, but energized and ready to resume work. He became professor of ecclesiastical history at his alma mater, General Seminary, and four years later was elected Bishop of Maryland, where he would serve the next forty years.

Excerpt from a letter written June 27, 1834 by Captain James Riley of the William Tell “Mr. Whittingham had a tough spell of seasickness for nearly ten days which thoroughly emptied his stomach, he soon gained an appetite and his old disorders of soreness of the throat and pain in the side seemed very much to abate, while his general health improved most astonishingly. He is truly a man of great talents, fine education and liberal mind, cheerful in his temperament, unassuming, conciliatory, possessing of all the requisites of a great and good man, as the foundation was laid in common sense and a vigorous and powerful mind. Such a man would do honor to any situation and I look forward with an eye of faith when he will return to his home in health and fine spirits – and become an ornament to the profession he has chosen and be raised to the highest point of honor and usefulness by his merits, and that I may live to see him a bishop.”