From the Archives: Retrieving Stolen Documents 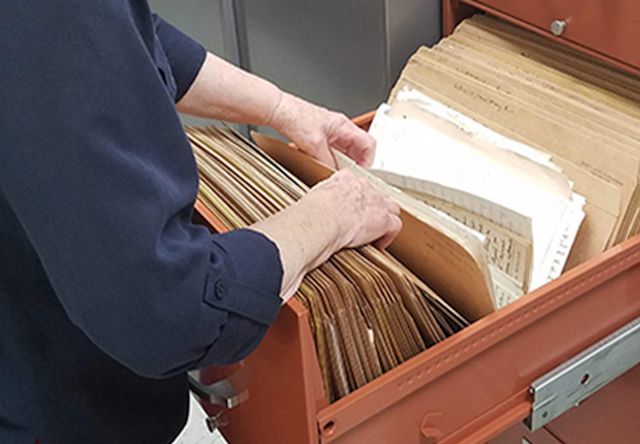 When Garner Ranney began his 40-year tenure as archivist for the Diocese of Maryland in 1960, he began to systematically catalogue the manuscripts in the collection, which had been in bundles, stored in several locations. As he slogged through this painstaking process, he began to notice large gaps in the holdings, and kept a logbook of items he could identify as missing. In 1971, he “discovered that many papers similar to ours were at a university in another state. I learned that those items had been sold to the university over a period of years by a man whom I shall call John Dover (not his real name), a resident of Baltimore. Valuable books and pamphlets had come from the same source.” As Ranney followed clues, he traced “John Dover’s” employment as a student-janitor in the diocesan library, the forerunner to today’s archives, from 1933, when he was given keys to the building. For the next 16 years, through his undergraduate and graduate student days, Dover “made himself useful” to the aging archivist, and stole over 13,000 manuscripts from the Diocesan archives collection, selling them to at least two universities, and to unknown dealers. Dover bankrolled his academic career this way, from undergraduate to Ph.D. (in history, no less!), going so far as having stationery printed touting “Rare Books and Manuscripts” for sale.

Garner Ranney compiled a 152-page document, which reads like a good mystery story, proving that the manuscripts sold to the university were the property of the Diocese of Maryland, and all 13,000 were returned. Another 739 documents, traced to a university in Maryland, were also returned. Confronted by the evidence, Mr. Dover said that the aged archivist had given him permission to take whatever he liked, and not wanting to cause the infirm archivist pain and embarrassment, the chancellor and Ranney declined to prosecute.

These thousands of documents are still being processed. Ranney sorted them by author, but was never able to do more. They live in the vault of the archives, and are being processed little by little. Some folders contain many letters, almost all having been written to Bp. Whittingham in the 19th century. One clergyman’s file holds 302 letters! As they are read and accessioned, details not previously available to researchers come to light. If you ever want to read Ranney’s 152-page “Mystery of the Stolen Documents”, I will lend you a copy. Fascinating reading, and an ode to the quiet yet determined defender of the intellectual property that is our legacy – Garner Ranney.