From the Archives: Advent Poem 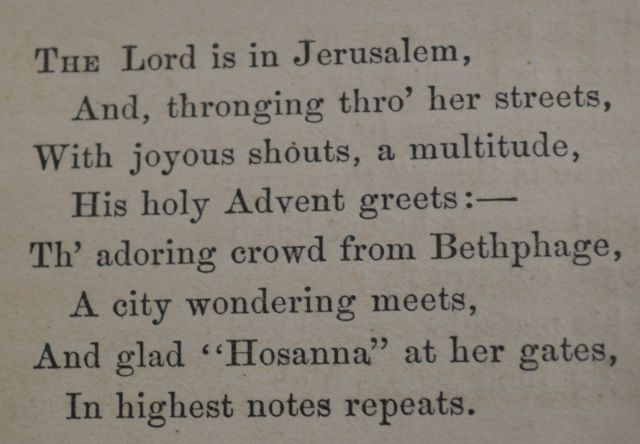 High time to wake from sleep;

The night is past; the day-spring dawns,

Let us our vigils keep.

Awake, awake, though all around,

Are lost in slumbers deep;

Arise, and with repentant heart

One verse of a 40-stanza poem written by the rector of a country parish on Maryland’s Eastern shore about 1850, “Advent Poem” numbers among the many pieces of poetry, devotional tracts, books, articles and pamphlets penned by the Rev. William Augustus White. White came from Pennsylvania to Spring Hill Parish in 1844, at a salary of $350 per year. In 1845, the Rev. J. A. McKenney wrote to Bishop Whittingham saying, “Our brother White and company passed through here (Cambridge, MD.) on Tuesday. Poor fellow! I trust he is not entirely dependent on his salary at Salisbury to supply seven mouths with food and seven bodies with raiment.” (White and his wife Catherine had six children: Herbert, Alice, Clement, William, Augustus and Laura.) In 1847, White organized the Claggett Society of Salisbury, and said he wished the Society could obtain Claggett’s mitre, and that he would write a poem about it if they did. Like many of his fellow High-Churchmen, White came under attack for practices which, in the eyes of some, smacked of “popery and unsafe Romanising”. Bishop Whittingham, in an 1855 letter to the Episcopal Recorder, defended White, saying that reports of “profuse decoration of the altar with flowers” have been exaggerated, and that “flowers have been used only on Christmas, Easter and Whitsunday,” and few at those times. As for “wax candles on the altar,” they were in reality “fluid lamps conveniently arranged for the night services the rector must have in Salisbury since the other five churches in the rector’s care are being served in the day time.” The charges of “chanting and singing” by the rector were defended by the bishop who said White was merely singing “the customary chants and metered Psalms of the Prayer Book.” White was even charged with “ringing the Angelus” with the church’s bell. Whittingham’s explanation was that the bell was rung morning, noon and night, as a condition of the donor, and that “For the name ‘Angelus’ and the innuendo which it conveys, the malice of the popish spy is unanswerable.” In the most damning accusation, the paper reported that Mr. White dressed in “soutane and surplice with something like a stole around the neck;” but Whittingham replied, “Neither he nor his parish know what a soutane is.” During the service, the rector wears the common surplice and scarf, and nothing else.” The furor seems to have died down, and in 1861, William Augustus White left the Eastern Shore to become rector of St. James’, Monkton, where he stayed until 1865 when he returned to Pennsylvania. He retired to Philadelphia in 1896, and died about 1899.