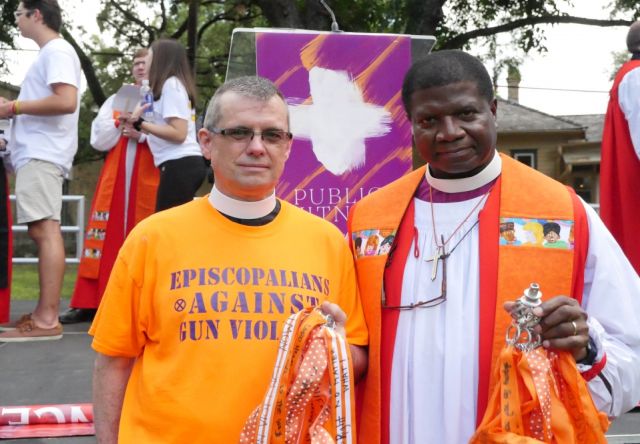 Thank you to the Baltimore Sun for coming out to cover one of our diocesan prayer walks to remember victims of gun violence in Baltimore City. The New Year’s Eve prayer walk included names of those who had been killed throughout 2018. Please join us for upcoming prayer walks, which take place several times a year through neighborhoods where victims were killed. All are welcome to participate in this time of prayer for our people.

t took about an hour to read them all. The 307 names filled two and a half typed pages, with nine of them — the most recent additions — handwritten on the back.

On Monday afternoon, the Rev. Canon Scott Slater led a small group in slow circles around the nave of a church, reading the names of Baltimore’s homicide victims for 2018.

They began with Andre Galloway, a 16-year-old boy killed on New Year’s Day 2018.

“Rest eternal grant to Andre, O Lord,” Slater said, walking past the wooden pews of the Cathedral of the Incarnation, which smelled of greens hung for Christmas.

“And let light perpetual shine upon him,” came the response.

Certain names popped out at church to Deacon Lauren Welch without her even knowing why.

“I almost wanted to cry,” she said.

The victims’ ages ranged from 5 months — the baby Brailynn Ford, killed in October — to 83-year-old Dorothy Mae Neal, who was found dead inside her West Baltimore apartment in August and remembered by neighbors as independent and soft-spoken.