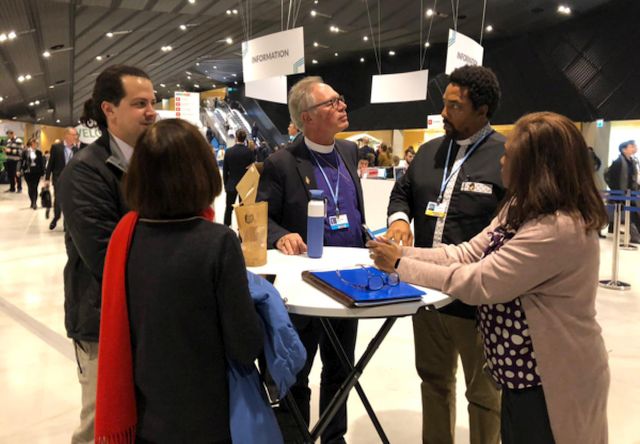 The Episcopal Diocese of Maryland is mentioned today in the Daily Record as being a supporter of the Maryland Clean Energy Jobs Act (MCEJA). Maryland Episcopal Environmental Partners (MEEP) take up issues of advocacy and action relating to creation care within the Diocese of Maryland. The Episcopal Church has long taken a stand on supporting stewardship of the earth, currently having named one of its core values to be creation care. (Please visit this page on The Episcopal Church website for news reports, resources and advocacy tips.) At the 79th General Convention of The Episcopal Church last summer in Austin, TX, legislation included resolutions on creation care, such as A018 Episcopalians Participating in Paris Climate Agreement; C008 Advocacy for Creation Care; C063 Advocate for Ocean Health; and A010 Planting of “Paris Groves.” In January 2018, the Presiding Bishop of  The Episcopal Church, The Most Rev. Michael Bruce Curry, released a statement on the United States withdrawal from the Paris Climate Accord, saying that The Episcopal Church stands prioritizes the care of creation and does not accept withdrawal from the accord. “We’re still in,” is the statement used by U.S. organizations, faith bodies and non-governmental organizations who want to address the climate crisis, according to Bishop Curry’s statement. Most recently, Bishop Curry sent a delegation to COP24 – the United Nations Climate Change Conference in Poland – in December.

“We know that caring for God’s creation by engaging climate change is not only good for the environment, but also good for the health and welfare of our people. The U.S. is currently creating more clean jobs faster than job creation in nearly every other sector of the economy, and unprecedented acceleration in the clean energy sector is also evident in many other major economies,” wrote Bishop Curry in 2017. “My prayer is that we in the Episcopal Church will, in this and all things, follow the way, the teachings and the Spirit of Jesus by cultivating a loving, liberating and life-giving relationship with God, all others in the human family, and with all of God’s good creation.”

Our bishop, Eugene Taylor Sutton, has also long embraced The Episcopal Church core value of creation care. According to the Daily Record, Political support for this clean energy legislation has been rising across Maryland right along with the warming temperatures.” Read the full story from today’s Daily Record on the status of MCEJA.