A Message from Bishop Sutton from the Holy Land 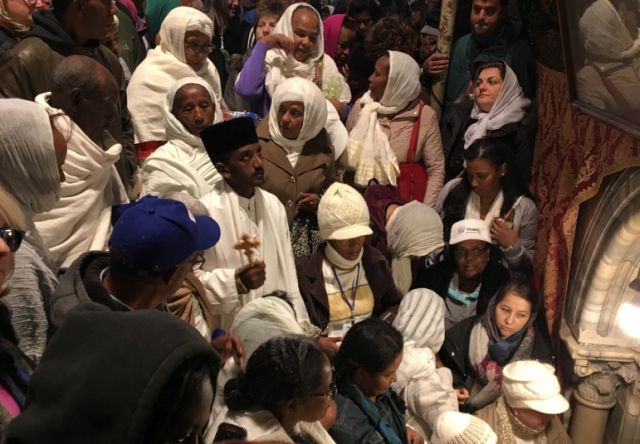 This is not the way we’re meant to live. Walls won’t get us what we really want.

Everyone wants to live in secure communities, free from violence, and free from terror. We want to live in peace, enjoying good and healthy relationships with neighbors who want the same things as we do. This is how we were meant to be in community: living in harmony with each other, with God, and with all creation.

But walls of separation, based in fear and mistrust, do not get us there.

As I write this, I’m looking out over Jerusalem from my window, this divided city on the border between Israel and (a hoped for) future Palestine. I’m leading a pilgrimage from the Diocese of Maryland to the Holy Land, as I have been doing about every two years since becoming bishop. Bringing pilgrims to a foreign land is one of the best ways to get us to gaze into a mirror at ourselves, our own lives in our own land.  And when I take a long look into that mirror, what do I increasingly see?

The pilgrims and I were blessed to be in Bethlehem, the City of David, celebrating Christmas with our Palestinian Arab Christian brothers and sisters on January 6 (which is Christmas in the Eastern liturgical calendar, and the Feast of the Epiphany in our Western church year.)

We celebrated the birth of Christ there, and were thrilled to be able to prayerfully kneel and touch the stone manger in the grotto of the Church of the Nativity where 2,000 years of Christian tradition holds that the Son of God was born into the human family.

But the Prince of Peace was born into a city that is now walled off by ethnicity and religion, preventing its inhabitants from being able to travel freely to other parts of the nation. A wall that was erected in fear to keep some populations from others painfully divides the city of Jesus’ birth, who himself was born into a poor family who would quickly become refugees.

Whether or not intended to provide security for Israel’s Jewish inhabitants, or a way to justify and protect an illegal land grab by settlers, the effect is the same:  economic desperation, deprivation, anger, and daily humiliation for the Arab inhabitants of Bethlehem. This is not the way they should have to live.

Nor is it the way that the Jewish citizens Israel should live. The Wall dehumanizes both them and their Arab neighbors, causing both sides to become less than they were intended to be by God – and how they themselves want to be. Who among us wants to be an oppressor? And who among us wants to live as a perpetual victim?

And yet, as I gaze into that mirror to look at what is happening halfway around the globe, I see the same moral conflict in my own country that I see in the Holy Land. We as Americans imagine ourselves to be a generous, welcoming people for those who want to make a new life here, but we are also afraid that these newcomers will cause us harm. Whether from fear or racism – or both – we don’t want them here.

So, let’s build a wall.  Even if that wall causes hostility, suspicion, violence and hatred between peoples. Even if that wall sacrifices our core values, and causes us to act in ways contrary to a free, egalitarian and democratic society.

Every nation needs and deserves secure borders, but building massive, fortified, concrete or steel walls do not get us there. They foster more anger and violence, not security and peace.

And who cares that history shows that walls of separation, fear and mistrust do not work, and eventually are all dismantled or destroyed either violently or by popular demand? (Or they become tourist attractions for later generations.). If they make us feel safe, then isn’t that good enough? Well, not to God.

This summary of all of Jesus’ teachings is based on love, which casts out all fear. But how can we love God and our neighbor if we turn away from God and try to prevent ourselves from knowing or even meeting our neighbors?

Let me be clear. Walls – either psychological or physical – that are intended to keep individuals or nations from encountering and engaging with the poor, the oppressed, the dispossessed, refugees, and other marginalized persons are inherently immoral, unjust and unworthy of people of faith. They make a mockery of the gospel of Jesus Christ and of God’s vision for a just, loving and harmonious world. The are deeply offensive to those on the other side of that racial, ethnic and economic divide, serving as a daily reminder that they are seen as threats and not fellow human beings.

If it’s not your thing to live according to what God wants, and you believe that the Bible is merely a collection of folk tales that do not have to be taken seriously, then please just take it from those who have to live and work on either side of walled hostile borders: you really don’t want to live that way.

From the Holy Land