From the Archives: St. Barnabas’ and St. George’s Churches, our Cathedral’s Nucleus Congregations 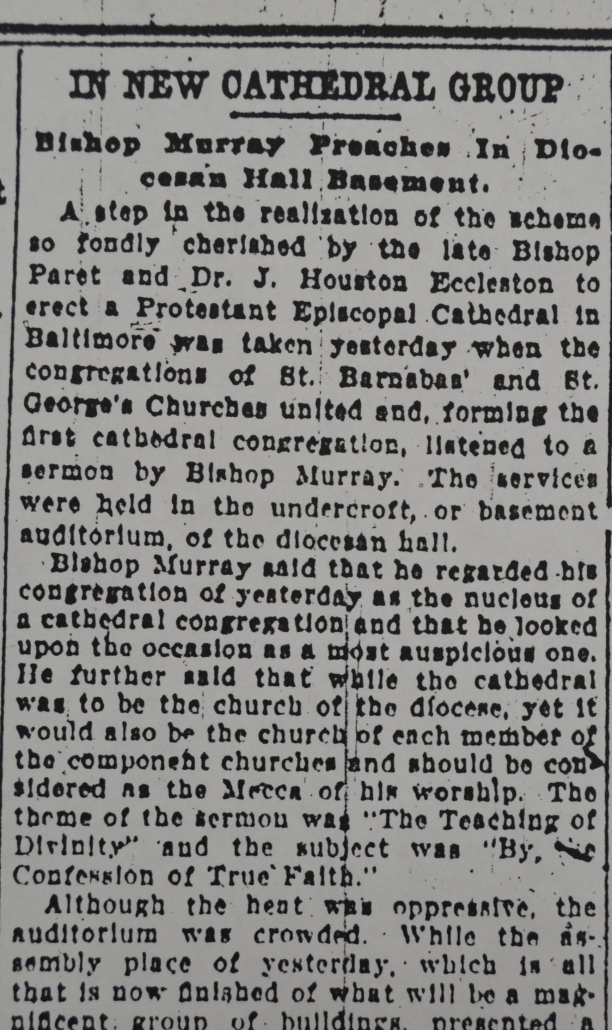 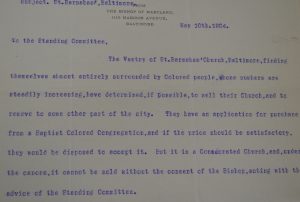 “A step in the realization of the scheme so fondly cherished by the late Bishop Paret to erect a Protestant Episcopal Cathedral in Baltimore was taken yesterday when the congregations of St. Barnabas’ and St. George’s Churches united, forming the first cathedral congregation.” So read a newspaper article of June 12, 1911, reporting on a service held in the newly completed Cathedral undercroft, which consisted of the Communion Service, a sermon by Bishop Murray, and a choir of men and boys singing “Ancient of Days”.

The cornerstone of St. Barnabas’ Church, located at Biddle Street and Argyle Avenue, had been laid on All Saints ’ Day, 1859, as the Missionary Church for the North Western district of the city.  Their 1901 parochial report listed over 600 communicants, with 153 pupils in the Sunday School. Yet on May 10, 1904, Bishop William Paret wrote the following letter to the Standing Committee, “The vestry of St. Barnabas’ Church, Baltimore, finding themselves almost entirely surrounded by Colored people, whose numbers are steadily increasing, have determined, if possible to sell their Church, and to remove to some other part of the city.” 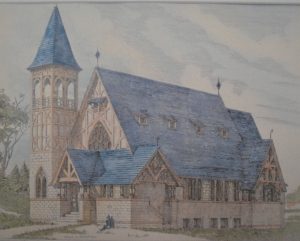 Meanwhile, St. George’s Church, at Prestman and Division Streets, which had been built in 1882 as a memorial to Bishop Whittingham, seemed to be prospering as well. In 1900, the vestry authorized enlarging the facility by erecting “a two-story brick building 19.5’ X 15’ on the organ side of the church.” The parochial report estimated 309 communicants, and 103 in the Sunday School. However, in November of 1904, the vestries of St. Barnabas’ and St. George’s voted to “consolidate” the two congregations, each keeping their own vestry, paying its own allotment to the diocese, and worshipping together at St. George’s. 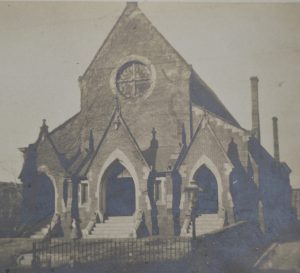 St. Barnabas’ building was sold in 1907 to the Roman Catholic archdiocese of Baltimore, which immediately placed it under the auspices of “the Josephite Fathers, the Catholic society of priests who conduct parishes for colored people in this country”. The congregation, still called St. Barnabas’, worshipped there until 1931, when they joined St. Pius’ Church on Edmondson Avenue, and the church sold to a Baptist congregation. The building was turned into a garage in 1941, and demolished when Martin Luther King Blvd was built in 1982. A Diocese of Maryland Anglo-catholic parish, Mt. Calvary Church, purchased St. George’s Church in 1910, to become the home of one of their black missions, St. Katharine of Alexandria, which still worships there today.

After St. Barnabas’ sold their building in 1907, the vestry purchased a lot at St. Paul & 35th Street as a site for a new church building for the combined congregations of St. Barnabas’ and St. George’s; however, in May of 1908, a deal was reached with the Cathedral Foundation: St. Barnabas’ would sell their lot, give the $9000.00 to the Cathedral Foundation in exchange for worship space in the soon-to-be-built Cathedral. Hence, the congregations of St. George’s and St. Barnabas’ gave up their identity, their buildings, and their assets in order to become part of the vision for a diocesan Cathedral, and the nucleus of a worshipping congregation. But, human beings in particular and societies in general, are complicated things! That self-sacrificing act was tempered by the reasons the congregations left west Baltimore – fleeing the steadily increasing numbers of African Americans moving there – to relocate to the newly emerging affluent Guilford area. Since the devastating downtown fire of 1904, institutions (including Johns Hopkins University) and homeowners sought higher ground away from the gritty harbor and dilapidated row houses into areas with housing restrictions.

Henry Vaughn of Boston was chosen as the architect for the grand design for a Cathedral complex, which would take up the whole block at University Parkway from Charles Street to St. Paul Street. In 1908 he was instructed to submit a sketch showing the proper location of the buildings which should include “a Cathedral, the Bishop’s House and Library, and a Synod Hall, which is to be used as a Pro-cathedral and church for the congregations of St. Barnabas and St. George.” The Undercroft was ready to occupy as the first worship space by June, 1911. The cornerstone of the superstructure of the Synod Hall was laid in 1920, but post-World War I financial problems caused building to be suspended; then the financial crash of 1929 caused a further dip in financial resources. However, by November of 1931, building of the Synod Hall began and was quickly ready to occupy for Christmas Eve, 1932, and was paid for and consecrated in 1955. The hopes for a huge Cathedral complex died hard, but by the 1960’s, all concerned were content with the present building and the early plans for a huge complex were finally laid to rest. 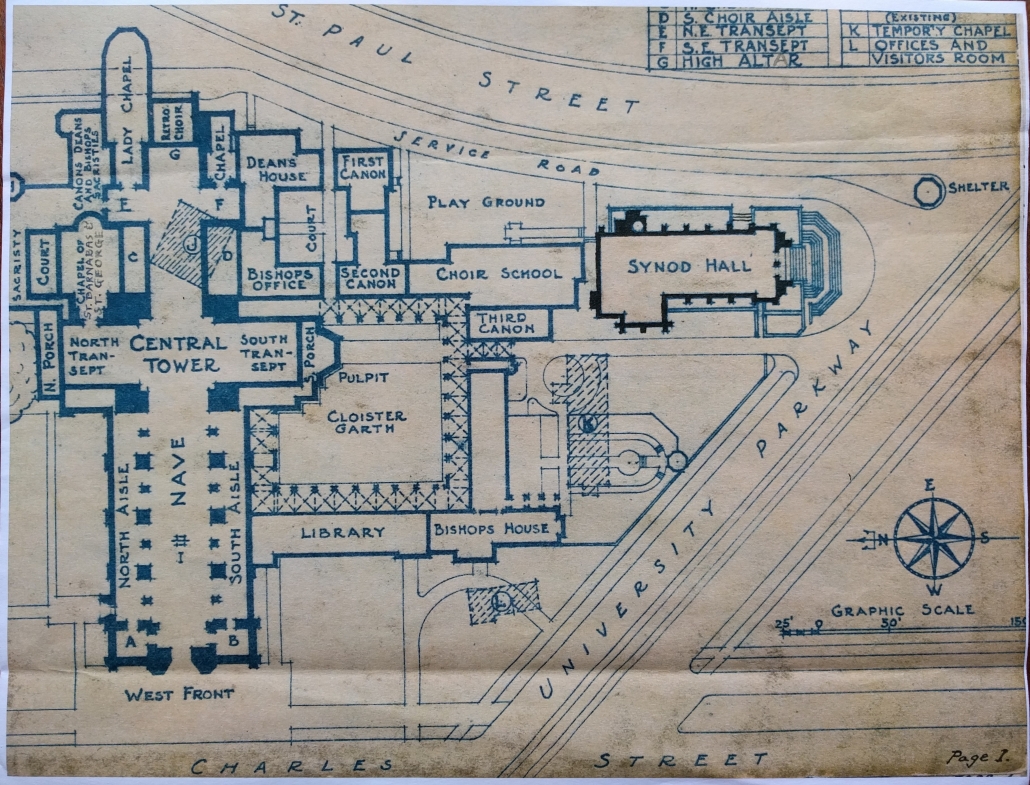 The blueprint of the original large cathedral design