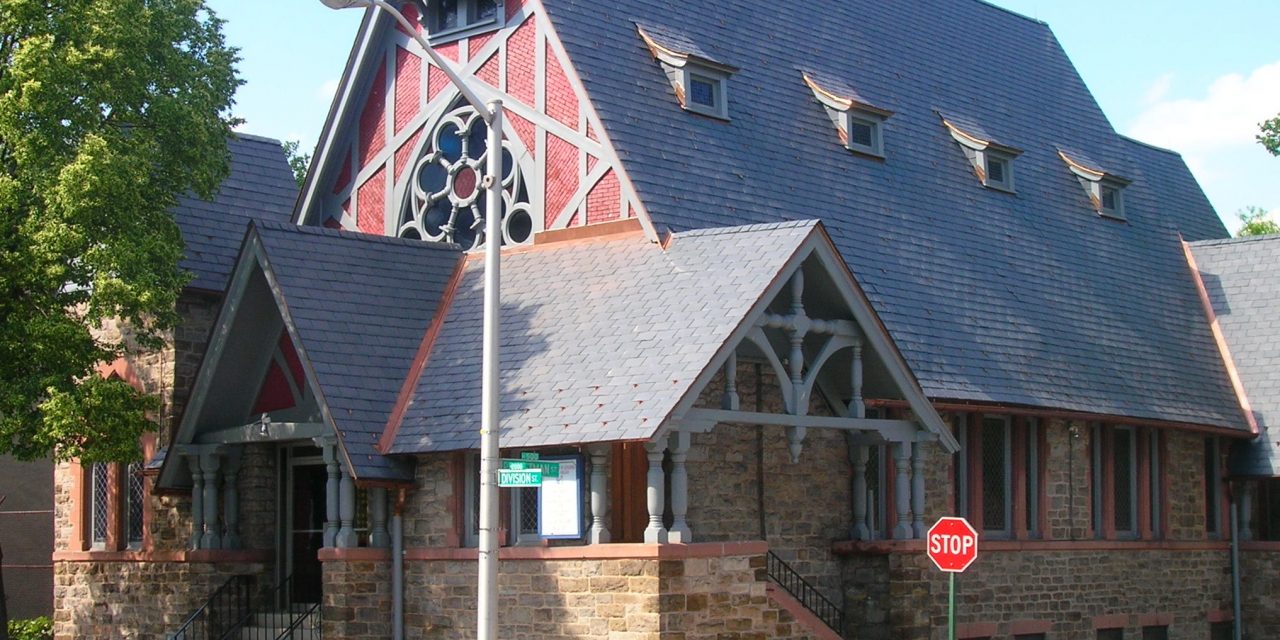 Last weekend was a particularly violent one in Baltimore City. 17 people were shot from Thursday through the weekend, according to The Baltimore Sun, five of them shot and killed a block from St. Katherine of Alexandria Episcopal Church in west Baltimore. The Rev. Grey Maggiano, rector of Memorial Episcopal Church, Bolton Hill, wrote the following invitation on his personal Facebook page Saturday afternoon:

“Usually I encourage my friends on Facebook to come to Memorial in the morning – but this is an exception. As you know it has been a very violent few days in Baltimore, with more than 17 people being shot since Thursday. 5 of those people were shot a block from Saint Katherine of Alexandria Episcopal Church, our neighboring church on Division and Prestman. If you are tired of violence, and want to support a community who suffers directly from it and is working to make it better, I encourage you to join them for worship at 9 am tomorrow morning and join them in our common prayer that fear doesn’t win.”

Several parishioners from Memorial, Bolton Hill, attended St. Katherine’s on Sunday, February 24. Among them was Memorial’s junior warden, Bill Roberts. Roberts reports it was very important for him to attend St. Katherine’s, to pray with them, and to be of support. He did so not only in response to Rev. Maggiano’s request, but because Memorial and St. Katherine’s have been working together for a couple of years to share events, worship and build community. They are working together to heal a breach created by society and the people have a deep affinity for each other. St. Katherine’s is a predominantly African American parish and Memorial is a predominantly white parish less than a mile away. Twice a year for the past couple of years, Memorial and St. Katherine’s have “church swapped,” as Roberts described it. This means the two congregations have held their Sunday worship together at one church or the other, but all together in one of the churches at a time. Last summer the congregations held a joint neighborhood party in a city park adjacent to St. Katherine’s known to be a destination for illegal drug activity. This joint event was to welcome families and children, to have fun and to take back the park. Later this year parishioners from both congregations are taking a field trip to Lancaster, PA to see the musical Jesus. Roberts says the joining of the two communities in their commitment to follow Christ brings him so much joy. The relationships built between the two parishes have been all about learning from each other, loving each other and getting to know each other. Roberts says the two churches, in the language of our presiding bishop, the Most Rev. Michael Bruce Curry, are working toward building the beloved community. “Nothing bad can ever come from being in relationship with our sister parishes,” said Roberts.

The Rev. Allston Jacobs, rector of St. Katherine of Alexandria, is grateful for the relationship with Memorial. “We have had this relationship for about two years,” he remarked. “It has been a good relationship.” Father Jacobs noted the two congregations work together often and St. Katherine’s will be going to Memorial for the Maundy Thursday service, and Memorial to St. Katherine’s for Good Friday, this Holy Week. Lieutenant Jackson of the Baltimore City Police at St. Katherine of Alexandria

Worshippers at St. Katherine’s Sunday received a special guest, Lieutenant Jackson from the Baltimore City Police Department. The Rev. Joanna White, chaplain to clergy and their families in our diocese, who also attended St. Katherine’s Sunday, reported he was there to update and reassure the community which has become more violent recently due to a re-distribution of the police force to focus on particular high-crime areas. Lieutenant Jackson commented on the often limited resources of the police department, according to Roberts, but he let the people of St. Katherine’s know the Baltimore City Police Department genuinely cares about and recognizes the problems of violence in the area. He stressed they want to hear from members of the community when they think there is illegal activity going on and when they are having special events beyond Sunday so the department can do their best to protect the safety of churchgoers. Father Jacobs noted the congregation is very appreciative of the police department’s efforts and that he, personally, has noticed an increase in their presence this week, reporting the police have been visible in the area every day so far. Lieutenant Jackson offered safety tips to allow churchgoers to look out for each other. Parishioners are grateful to learn how they can better support each other as they worship in the neighborhood and pray for the safety of all.

If you are interested in helping with the problem of gun violence, there are resources and action you can take. Tomorrow, March 1, 2019, The Episcopal Public Policy Network and Episcopalians Against Gun Violence are hosting a live event on Facebook at Noon, EST. From the chapel in the United Methodist Building on Capitol Hill for a prayer service of lament for gun violence. While folks in and around Washington, D.C., will be gathering in person, you can take part online by watching the service, praying with us for those impacted by gun violence, and joining in conversation about how we can work to stop gun violence.

The service will be part of the Facebook Live prayer services offered on the Episcopalians Against Gun Violence page on Fridays from Epiphany through Easter 2019 and will happen at the conclusion of a visit by Bishops United Against Gun Violence on Capitol Hill, advocating to Congress for smarter gun reform legislation.
Ways to participate:
1. Engage on social media with #bishopsonthehill and #EpiscopalAdvocacy
2. Share the action alert from @TheEPPN
3. Start a prayer service of your own in your parish – http://bishopsagainstgunviolence.org/liturgical-resources/