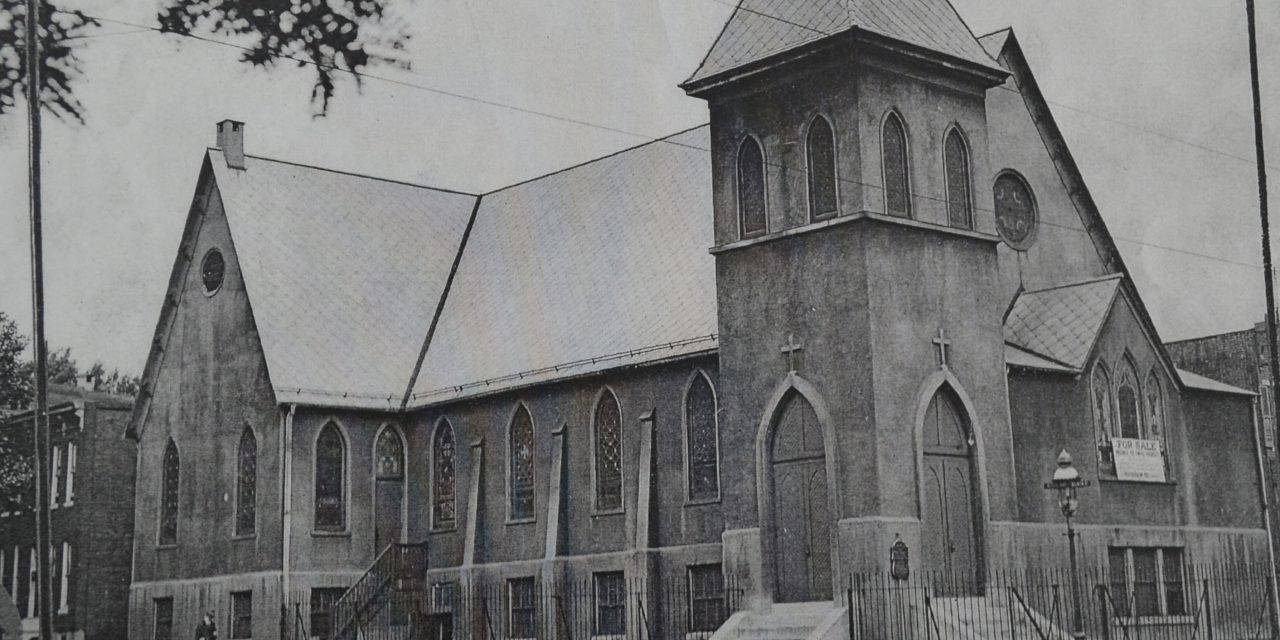 Quoting a history of Holy Trinity Church written by Howard H. Evans in 1978, “The Supreme Court ruled in 1948 that restrictive covenants – private agreements barring members of minority groups from buying or renting property in certain neighborhoods – could no longer be enforced by state or Federal courts. Shortly after the rendering of that momentous decision, Baltimore experienced a racial change in the composition of many neighborhoods that were heretofore all white.” Caught up in that demographic change was the Church of the Holy Trinity on the northwest side of Baltimore at Lafayette and Wheeler Streets. Holy Trinity had begun on October 17, 1875, in a house at 306 N. Gilmor Street, as a mission of Memorial Church, with some additional help from Emmanuel Church. The assistant minister at Memorial, the Rev. Otis A. Glazebrook, was in charge of the Mission, which by November of 1875, was strong enough to begin constructing a church building at the corner of Gilmore and Tennant (now Riggs) Streets. The building was “a wooden chapel, 80 feet long and 36 feet wide” which was completed in 90 days. On Sunday morning, February 13, 1876, the service of dedication was held in the church. The congregation continued to grow, but by May of 1920, The Maryland Churchman ran the following notice, “By an almost unanimous vote, the congregation of Holy Trinity Church, Riggs and Gilmore Streets, have decided to sell their present church building and move to the lots purchased by the Church Extension Society, corner of Wheeler and Lafayette Streets.” In October of 1920, the church building was sold to Mount Zion Methodist Episcopal Church, “a Negro congregation”, and by February of 1922, the new building was finished. Built as a combination parish house and worship space, Bishop John Murray dedicated the edifice on February 19 “in the presence of a congregation that filed every seat and many chairs placed even in the vestibule.” By 1953, the congregation of Holy Trinity had shrunk and decided to merge with St. Bartholomew’s on Edmonson Avenue. In a June 18, 1953, agreement, it was stated, “That the physical assets of Holy Trinity, consisting of the building and land at Wheeler and Lafayette Avenues, be turned over to the Convention of the Diocese, without restrictions, but with the expressed request that it be used for the establishment of a Negro congregation, bearing the name of Holy Trinity.” Accordingly, Bishop Noble Powell gave temporary oversight of the new congregation to the Rev. Cedric Mills, the rector of St. James’ Church, Lafayette Square, and asked the Rev. Van Samuel Bird to take up the position of vicar. The Baltimore Afro-American reported, “On the first Sunday in October, Father Mills and his choir went over and participated in opening services at the new church.” The new vicar wrote in a November article in The Maryland Churchman, “Even though there are a number of Episcopalians in the neighborhood, the greatest strength will perhaps come from the unchurched people. The Church has a great challenge and opportunity for real missionary work. We hope to make Holy Trinity the neighborhood church, and develop a vital program for the church and the community.”

In his ten years at Holy Trinity, the Rev. Van Bird encouraged the new congregation, eventually serving as pastor to nearly 400 members, and brought the church to the brink of self-supporting status, having begun the canonical process before he left in 1964. The Diocesan Convention of 1968 accepted the congregation into full parish status, under the leadership of the Rev. Robert Powell, who completed the drive to build an education and office building. The Rev. Linwood Garrenton served from 1972-1982, and the Rev. Eddie Blue came in 1984, staying until 20//.

In recalling the words of the first vicar of Holy Trinity as he accepted a new call, the people of Holy Trinity can share in his assessment. “The greatest accomplishment was contributing to and enabling the emergence and growth of a truly Christian community of love. In this community called Holy Trinity, we persons of different ages, levels of income and education, spiritual perspectives and sensitivities, knew that we were loved and belonged. We affirmed and loved others who were not a part of this particular community. In a small way, I was an instrument for the birth of a ‘caring community’ “.