From the Archives: Demographic Shifts and Church Responses

Previous Maryland Episcopalian archives stories have looked at the founding of St. James’, Lafayette Square and St. Mary the Virgin, Walbrook Junction. We explored how these church communities were originally formed and their current ministry in west Baltimore. Today we tell the story of the Church of the Ascension and Church of the Prince of Peace, congregations that occupied the church buildings now used by St. James’ and St. Mary the Virgin before merging in 1931, moving to Baltimore County in 1959 and closing in 1985. 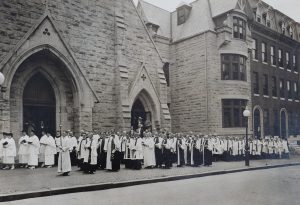 The Church of the Ascension, Baltimore, began as a mission of St. Peter’s Church in 1838, with a boys’ Sunday School class meeting in an “upper room” at St. Peter’s. Their first church building was erected in 1840 on Lexington Avenue, east of Pine Street, and a new stone church was built in 1867 on Lafayette Square, at Arlington and Lafayette Streets. However, this lovely building was utterly destroyed by fire on a Monday night in May of 1873. The vestry determined to build a temporary worship space by the following Sunday, and by Saturday night, a building had been constructed on a neighboring lot, which would hold 600 people. The church was rebuilt to the identical specifications of the original plans, and was ready for occupancy in January. The congregation flourished into the twentieth century, and its rector John LaMothe, was elected Missionary Bishop of Honolulu in 1920. His consecration took place at his parish on June 20, 1921, and an historic photograph shows the impressive procession lining up in front of the church. 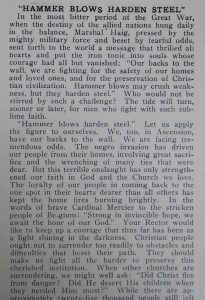 Demographic changes, however, proved to be a problem in the nineteen-twenties. By 1926, the parish was in discussions with at least three other parishes, seeking merger options: The Cathedral congregation, St. Bartholomew’s, Ten Hills, and St. Michael and All Angels’, Baltimore. When all these options fell through, the vestry began negotiating with the Church of the Prince of Peace, located in the Walbrook section of Baltimore. In April 1927, the rector of Ascension, Robert Evans Browning, wrote in the parish newsletter, using symbolism left over from the First World War, “In the most bitter period of the Great War, Marshall Haig sent a message, saying ‘Our backs are to the wall, but we are fighting for the safety of our homes, and the preservation of Christian civilization. Hammer blows may crush weakness, but hammer blows harden steel.’ We, too, in Ascension, have our backs to the wall. We are facing tremendous odds. The Negro invasion has driven our people from their homes, involving great sacrifice. Christian people ought not to surrender too readily to obstacles that beset their path. The world still loves to see a good fight. We will not acknowledge defeat until God bids us lay our armor by. Let our fighting be the unflinching courage of those whom hammer blows harden into steel.” 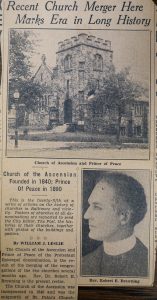 By 1931, the congregations of the Church of the Ascension and the Church of the Prince of Peace had come to a consensus, and apparently the parishioners of Church of the Ascension had “laid their armor by.” The Ascension congregation would move to Walbrook, assume the mortgages on the church, parish hall and rectory held by Prince of Peace, and sell their own buildings on Lafayette Square. The Diocese was interesting in buying Ascension’s property for use of St. James’ First African Church, but couldn’t come up with enough money, so Mt. Calvary Church (which supported two African-American congregations, St. Mary the Virgin and St. Katharine of Alexandria) loaned the Diocese the money for a down-payment on the church complex. An acceptable deal was reached, and the St. James’ congregation worshipped in the church for the first time on Easter of 1932. 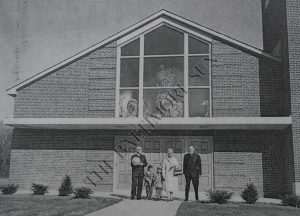 Church of the Ascension and Prince of Peace, Liberty Road, 1960

The newly consolidated congregation of Church of the Ascension and Prince of Peace ministered in the Walbrook neighborhood until 1953. The rector, the Rev. Joseph Wood, wrote in 1960, “Sensing the shift in population from Walbrook, we built a Chapel on Liberty Road at Rockdale in 1953. We built a new Church last year and on July 1, 1959, we moved from Walbrook and are now in full swing on Liberty Road.” 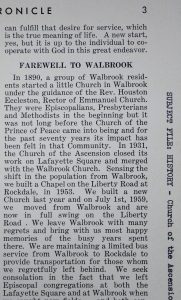 Again, a complex of church buildings came up for sale in the diocese, and again the diocese wanted to use the property for a “colored congregation;” and again, Mount Calvary supplied the means. The congregation of St. Mary the Virgin had been worshipping in their chapel on Orchard Street since 1880, rebuilt it after a devastating fire in 1947, and worshipped there until the city bought the property in 1958 for a new highway project. Mount Calvary guaranteed a down payment loan to the diocese from a bank, continued to supply a clergyman, and the diocese purchased the Walbrook property. In the 1960 “Farewell to Walbrook” article, the Rev. Mr. Wood put the following spin on Ascension and Prince of Peace’s move to the county, “We seek consolation in the fact that we left Episcopal congregations at both Lafayette Square and Walbrook when we sought new fields.”

A lone voice questioning the diocese purchasing the Walbrook property seems to have come from the Rev. Jack Malpas in a March 15, 1956, letter to Bishop Harry Lee Doll. “Is the Diocese justified in spending diocesan funds to purchase any property which is avowedly for the purpose of establishing a parish which is known to be beforehand planned along the lines of a segregated work?” Malpas was rector of St. Bartholomew’s Church in Baltimore’s Ten Hills community, less than one mile inside the western city limit, which itself was experiencing a dramatic racial demographic shift. (Statistically, the 1960 census showed that the area was composed of 12,236 whites and 5,838 blacks; yet the 1970 census showed that whites had shrunk to 1,297, and blacks had increased to 20,258.) Malpas and the vestry of St. Bartholomew’s faced this oncoming force of change head-on. In November of 1957, the rector asked the vestry to consider forming a policy for parish visitations by the clergy, and the vestry unanimously agreed to establish a parish policy, which promised no discrimination. “The same principles exercised in ministering to the present white families are proposed as parish policy with respect to negro families. We have a responsibility to all families in our neighborhood. Ushers especially are to be instructed that all persons presenting themselves at services are to receive the same treatment of welcome and courtesy. Integration is simply to be expected to happen some time at St. Bartholomew’s and we need to help prepare our people.” 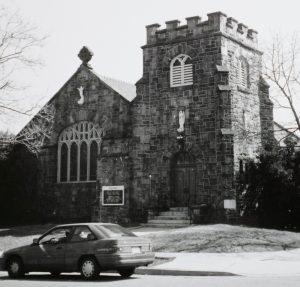 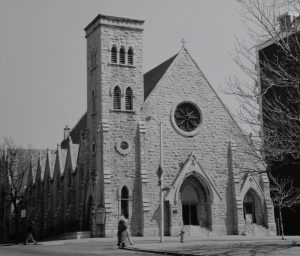 By January 1985, the Sunday attendance at the Church of the Ascension and Prince of Peace on Liberty Road had dwindled to between 50 and 60; the church buildings were up for sale, and they were looking for a new priest. The parish officially closed by the end of the year. The congregations which occupy their former church buildings in West Baltimore, St. James’ and St. Mary the Virgin, have strong small, congregations today. St. Bartholomew’s, Ten Hills, has over 400 baptized members.