From the Archives: Part II, Religious Toleration in Colonial Maryland 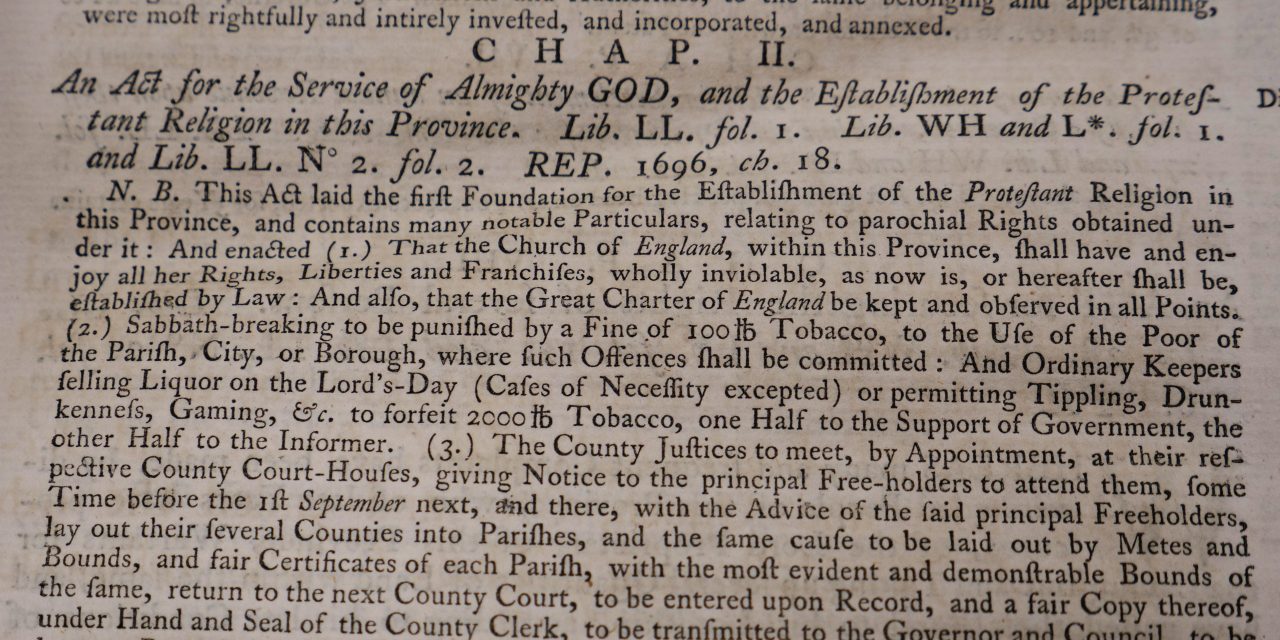 Establishment of the Protestant Religion in the Province of Maryland, 1692

This is part II of a series. Part I can be found here: “Religious Toleration in Colonial Maryland“

After the Roman Catholic King James II was driven out of England in 1688, and the “Glorious Revolution” placed his Protestant daughter Mary and her Dutch husband, William, on the throne, a band of revolutionaries took over the Maryland government in St. Mary’s City (which was the capital of the colony) by force. This group, calling themselves the Protestant Association, accused Lord Baltimore of giving land grants and government positions to too many Roman Catholics, and they appealed to the new sovereigns to make Maryland a royal colony; William and Mary complied. The first Royal Governor, Lionel Copley, arrived in Maryland in 1692, with instructions from the Crown that the Book of Common Prayer be regularly used, the “blessed sacrament administered according to the rites of the Church of England,” churches be built and maintenance provided for parish priests. The Maryland General Assembly, therefore, enacted a law for the Establishment of the Anglican Church in the Province, naming it the state-sanctioned, official church.

The Freeholders (those men who held the legal title to land) of Maryland were to meet by September 1, 1692, and divide the colony into 30 geographical parishes of the Anglican Church.  The sheriff was required to collect 40 pounds of tobacco for each “tithable” to finance making Anglicanism the official state-supported church in Maryland. (A tithable was defined as all free males over the age of 16, and all slaves, male or female, over the age of 16.) The Freeholders were to select six men to be a vestry for each parish. After the sheriff had collected the tax of tobacco, which was the currency of the era, and turned it over to the vestry of each parish, the vestry was to build a church building and apply any remainder to the support of a priest. Each vestry served as an arm of the county government, distributing tax revenues, and hearing minor legal cases, usually involving women having children out of wedlock or couples cohabiting without being married, and petty thievery. The miscreants were usually fined and admonished, not severely punished.

Although some Marylanders complained about paying taxes to support a church to which they did not belong, there was not much other protest over the system. In a letter dated May 14, 1698, the clergy of Maryland wrote to the Bishop of London (who had charge of the churches in the colonies), giving an account of the state of religion in Maryland. They said that “Quakers and Roman Catholics combine in opposition to the Church”, but Anglicanism remained the state established church in Maryland until the American Revolution.

Just because the Anglican Church had official endorsement in Maryland doesn’t mean that there was smooth sailing. One of the biggest problems was the lack of a bishop. In Maryland the functioning head of the church was the governor, who had the power to appoint clergy to parishes, but not to remove them. The Bishop of London occasionally sent a Commissary to oversee clergy in Maryland, but these appointments were few and seldom. Laymen and clergy alike grew possessive of power and lack of oversight. Although some parishes complained of scandalous clergy, the vast majority of the priests were hard-working and dutiful, even easy-going. (Of the over 300 clergy who served in Maryland between 1692 and the Revolution, 35 were formally accused of irregular conduct, and only 6 were found guilty.) When the Great Awakening swept the colonies in the 1730s and 1740s, dissenting groups expressed horror at smoking, dancing, theater-going, fox hunting, card playing and horse racing, which were seen as innocent merrymaking by most Anglicans. Maryland was known for its “middle temperament”, and so was its church, neither imposing harsh punishments for minor crimes, hounding late tax-payers, nor imposing strict social norms. 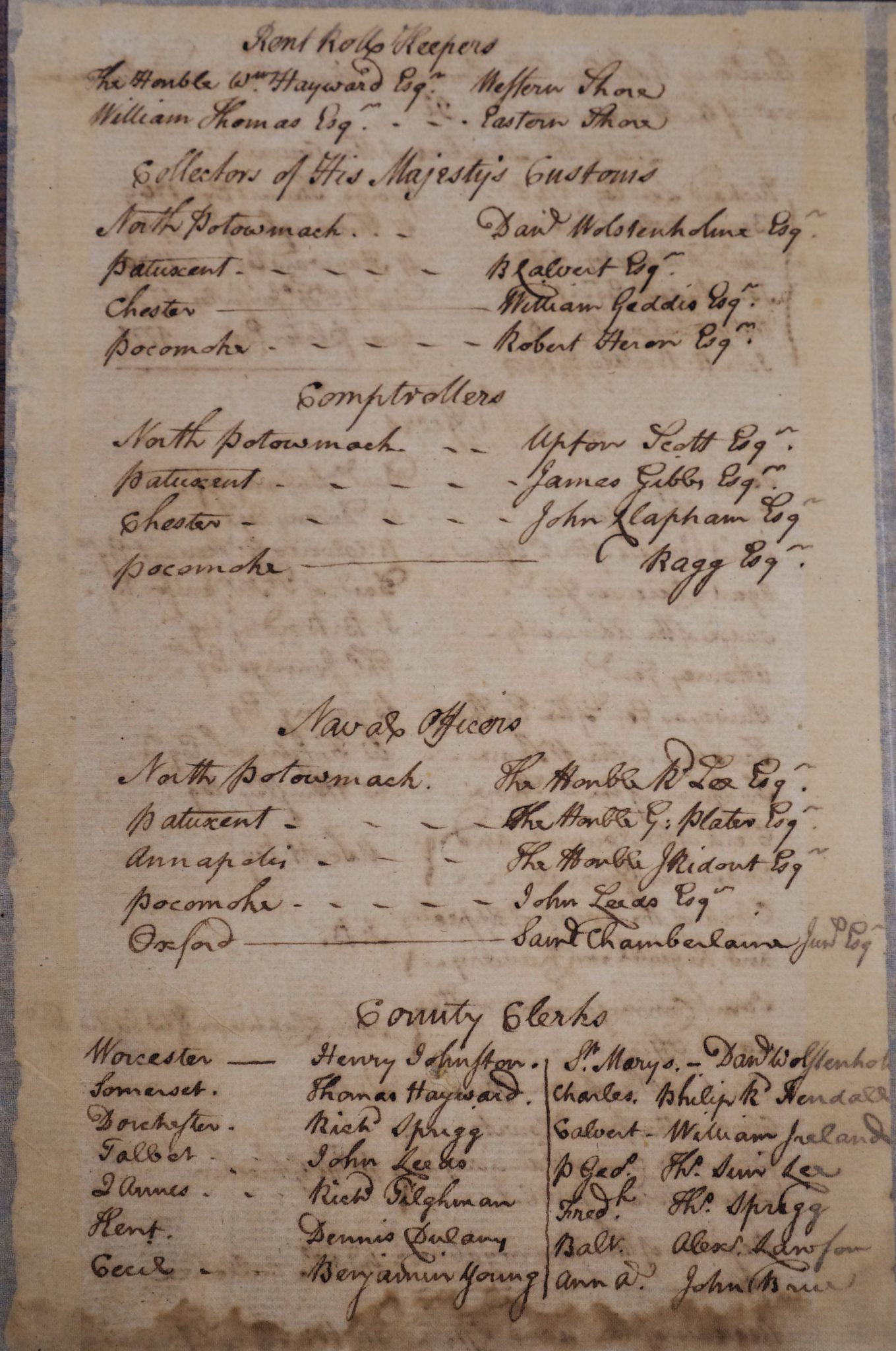 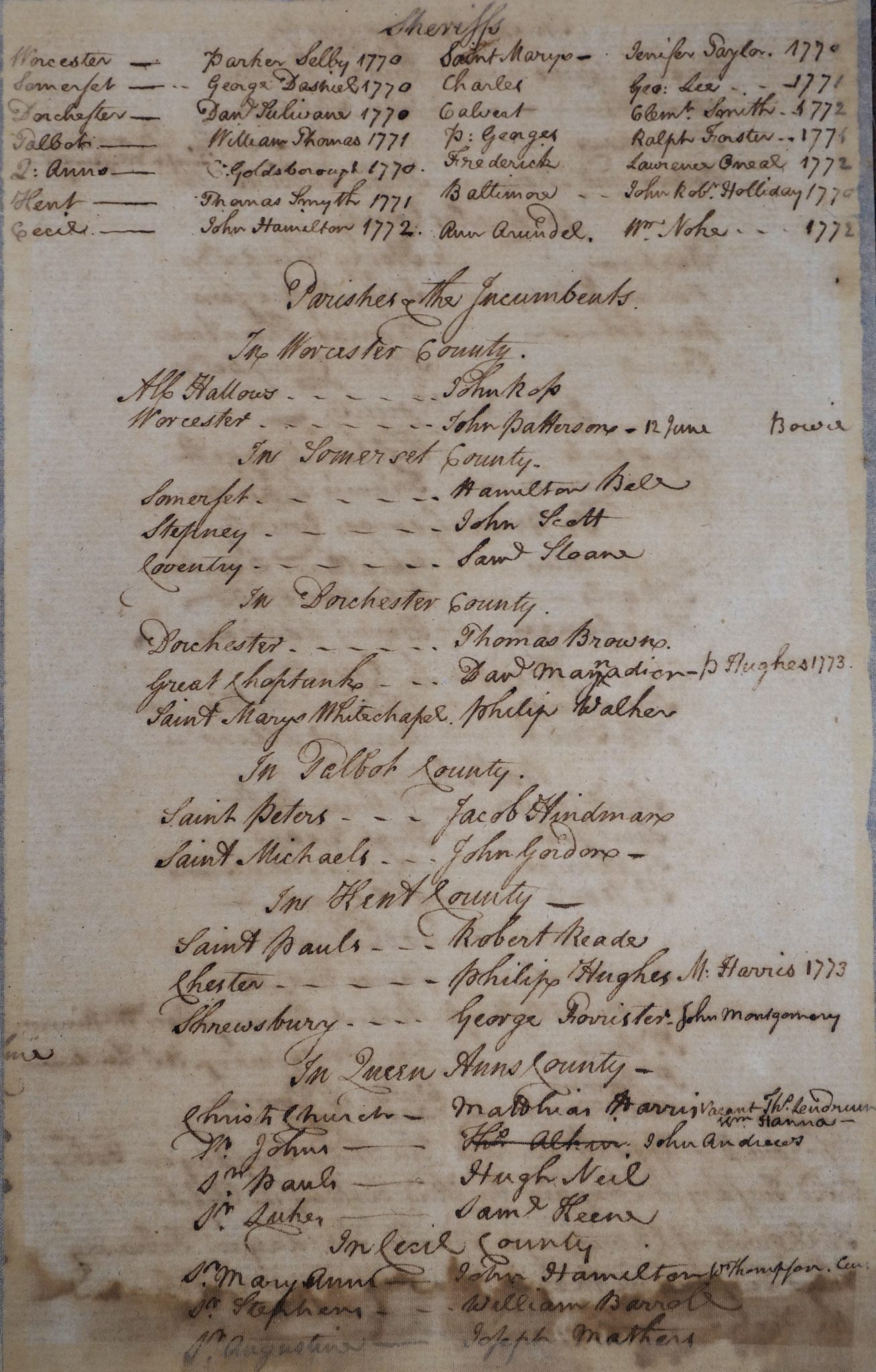 Parishes of the Incumbents, 1773
(click image to see full document)

By the 1770s, there was a move to repeal the Establishment of the Anglican Church as revolutionary sentiments swept the colonies, making clergy anxious. Some Maryland clergy left for England, taking seriously their ordination Oath of Supremacy to the king of England. Others simply moved to quiet out-of-the-way places and stopped officiating until the upheaval was over. After the Revolution, being a member of a church called The Church of England, was obviously unpopular, and the name Protestant Episcopal Church was coined at a meeting of clergy and laity in Chestertown, Maryland, in 1780. Maryland was fortunate that the state government allowed The Episcopal Church to keep all the lands, buildings, silver, glebe lands, and other property it had owned before the Revolution, while other states which had Established churches were met with harsh retribution. Virginia, under their governor Thomas Jefferson, stripped the Anglican church of everything – land, buildings, silver, furnishings, and glebes. Did the legacy of religious toleration in Maryland have anything to do with the mild treatment the Maryland church received? Perhaps the legacy of toleration for differences in religious belief begun in 1632 and percolated for 150 years, influenced a “middle temperament”, not only in the church, but in the minds of most Marylanders. The Maryland church’s recovery after the Revolution was difficult and slow, but it would have been much more difficult if it had had to start with nothing. Toleration is a concept still in dire need today, a concept we may proudly say was first introduced, however flawed and restrictive it was, in Maryland.