The Church of the Holy Covenant, Part I

The Church of the Holy Covenant has one of the most complicated histories of any church in our diocese. It has been known by at least four names and moved at least six times. Starting at the beginning, let’s try to sort out this puzzle.

On Sexagesima Sunday (The second Sunday before Lent, named for being about 60 days before Easter), February 11, 1844, Bishop Whittingham wrote in his Journal, “I officiated in a new church edifice, in Baltimore, east of Harford Run, at present known as Cranmer Chapel, on the occasion of its first opening for public worship. Plain and unpretending, but neat and commodious, it is another instance of the extension of the services of the Church, without price to those who find, or think they find, no welcome elsewhere.” This church building was located at the northeast corner of Spring and Mullikan Streets, and had been funded by Christ Church. In the 1844 parochial report for Christ Church, the rector, Henry Van Dyke Johns wrote, “During the past year, the congregation has erected a commodious chapel in the eastern part of the city, and have paid for the expenses of its materials and construction. They have also supplied the same with services of the church. A vestry has been elected…” 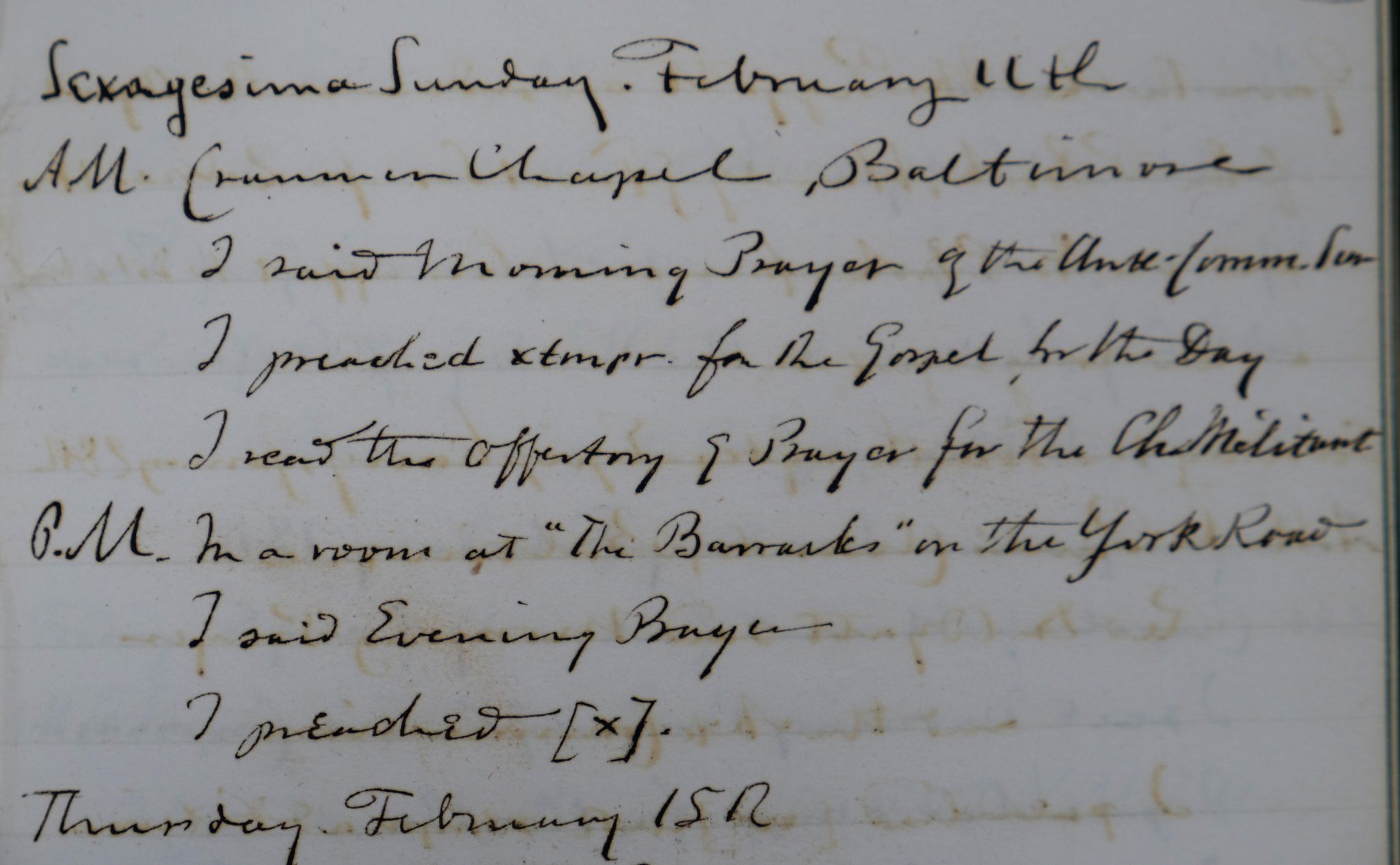 By 1870, the congregation of Cranmer Chapel had grown, with 150 people regularly attending church on a Sunday, and 250 children in Sunday School. A larger building was erected at Broadway and McElderry Streets, across from Johns Hopkins Hospital, and the congregation changed its name to “The Church of Our Savior.” By 1875, the church boasted 275 communicants, was free of debt, and sponsored a Mission School on East Biddle Street. In 1894, the rector noted that he “visited the patients at Johns Hopkins Hospital constantly,” in addition to acting as chaplain to the Church Home and Hospital.

During the early part of the twentieth century, the Church of Our Savior was a busy and flourishing parish. In 1930, the parochial report listed 198 communicants and 77 children in the Sunday School. By the mid-1950s, urban renewal around Johns Hopkins Hospital had left the church standing alone, all the buildings around the church having been razed. By 1954, which would prove to be a fateful year, the congregation was struggling with only 80 communicants and no Sunday School. In October of that year, Hurricane Hazel struck Baltimore, and, according to a brief snippet in the Maryland Churchman, Our Savior’s “roof was peeled off and blown to the ground”. Repairing or rebuilding proved “beyond the present resources” of the parish, and in 1956, the parish asked to revert to mission status and combine its limited resources with the diocese to build a new building on the same lot which would serve as a parish church and the diocesan “service building.” The plans included a big kitchen, space for meetings, Sunday School rooms and three residential rooms for single clergy or interns at Johns Hopkins Hospital. During construction, the congregation worshipped in the chapel of Church Home and Hospital, the new building opening in October of 1959. Meanwhile the country’s second-oldest congregation for the deaf, All Angels Mission, which had been founded in 1859 by the Rev. Thomas Gallaudet at Grace Church, Baltimore, was looking for a new home. The 100-member congregation merged with Our Savior in 1959, and their vicar joined the staff.

Our Savior’s new worship space boasted a strikingly modern stained glass window above the altar, clear etched glass throughout, and a free-standing altar. Below the main worship space were a large recreation room and meeting spaces, restrooms, and a. kitchen. One valuable asset was a parking lot, a real boon in a neighborhood quickly becoming less residential and surrounded by an expanding Johns Hopkins Hospital. 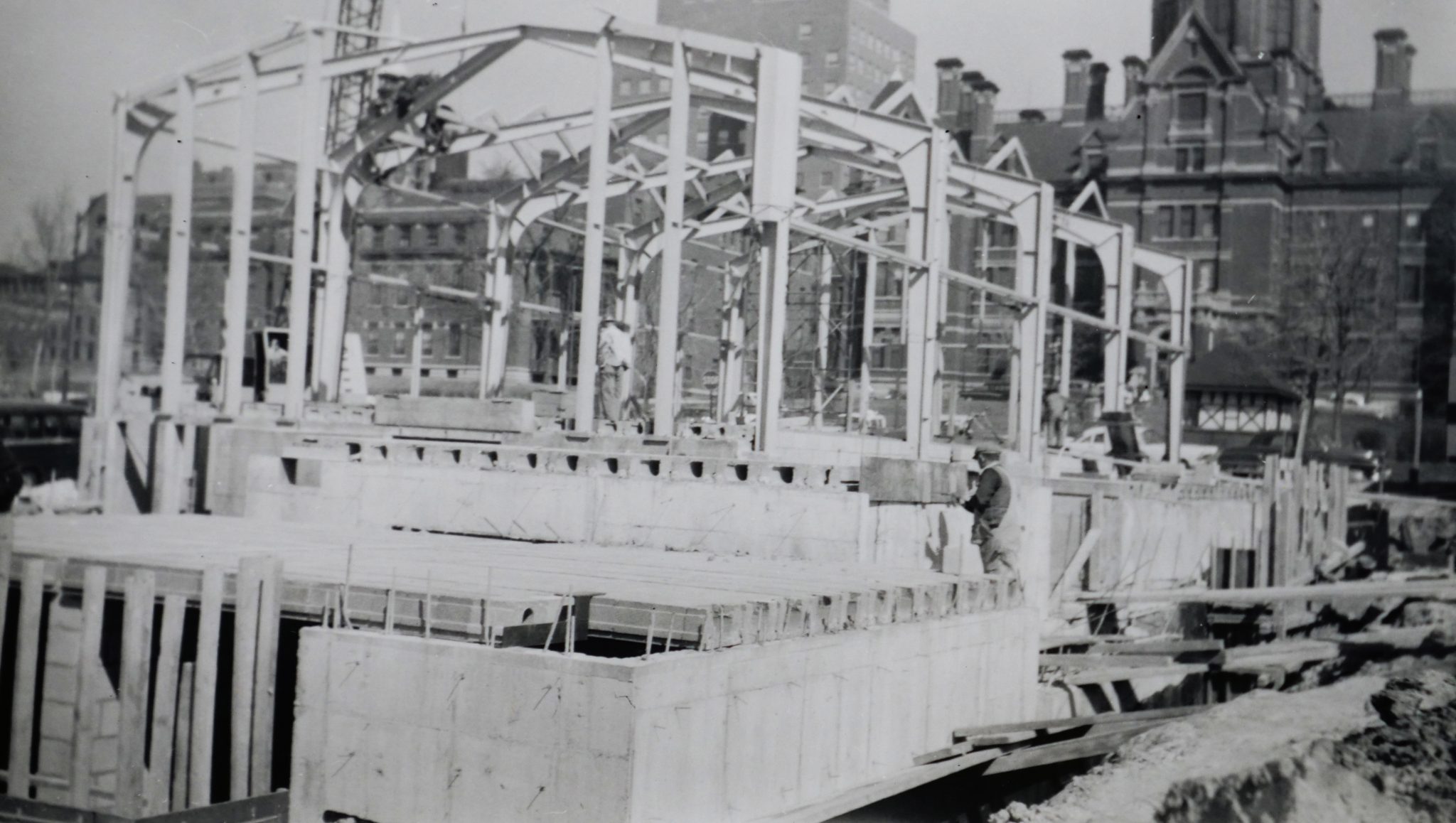 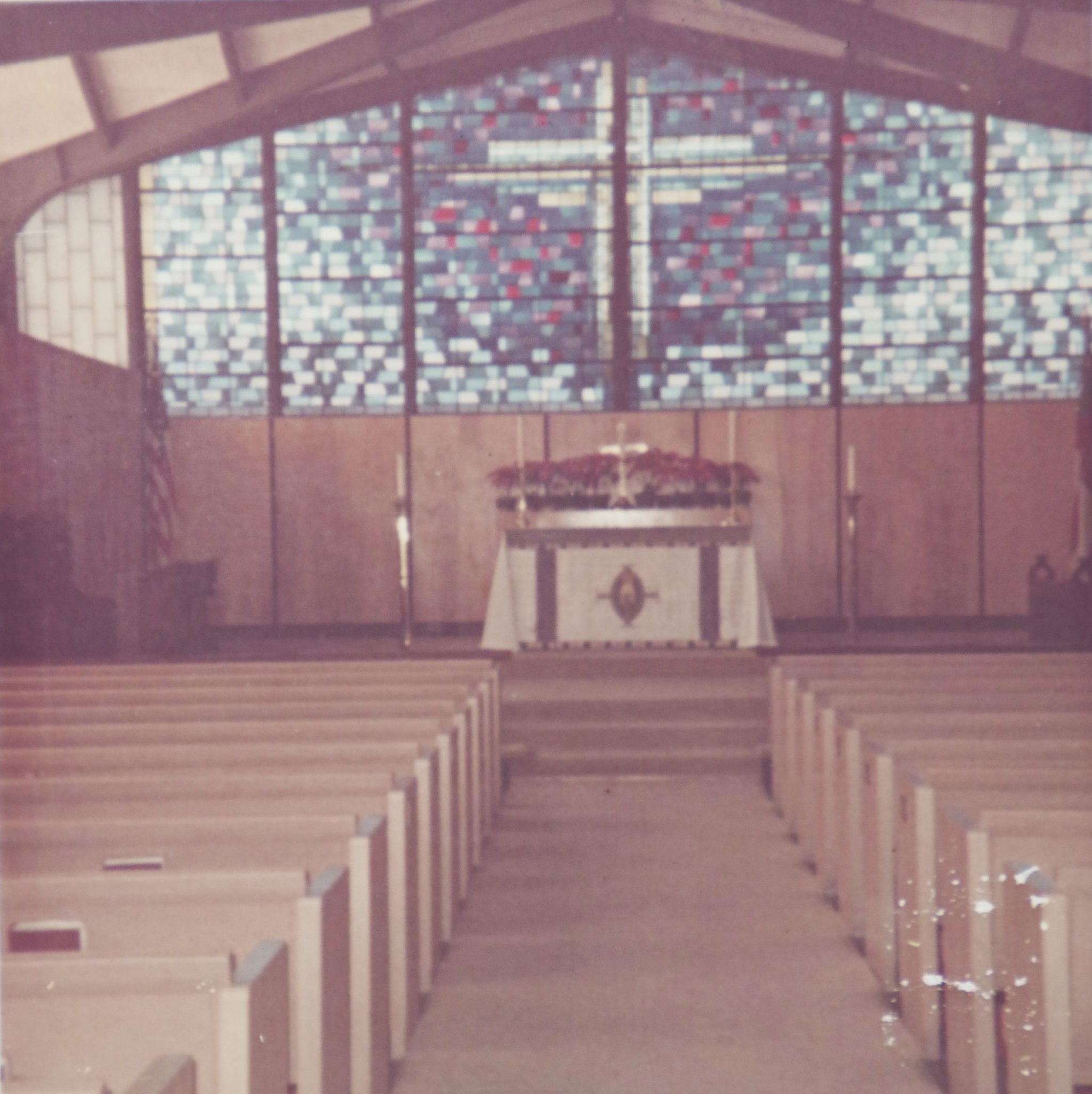 Photo of stained-glass window in Church of Our Savior, 1969

In 1961, the Rev. Herman di Brandi became vicar, and chaplain at Johns Hopkins Hospital. In his 10 years at Our Savior, he created and became the first supervisor of the Pastoral Training Institute at the hospital, the predecessor of Clinical Pastoral Education, which is required of seminarians today.

By the 1970s, still affected by the assassination of Martin Luther King, the neighborhood showed signs of stress. According to Rovan Wernsdorfer, who became vicar in 1971, “It was basically a poor black neighborhood with public housing across Broadway, and behind the church you had this compound of privileged, mostly white medical residents and their families.” But the church responded by providing children’s services, sponsoring a day care center, hiring a mentor for neighborhood boys, providing sign language interpretation for the deaf members, reaching out to the medical families, as well ministering to the elderly members who still called Our Savior their home. Even though ministry was active, financial stability proved fleeting. Consultants proposed merging with another congregation, and vestry members were open to exploring all options, so when a neighboring church came calling, the stage was set for another new beginning.

Page nine of the January 1950, Maryland Churchman proclaimed, “St. Matthew’s, Our Newest Mission, Begins With High Hopes.” According to the article, Bishop Noble Powell had called the Rev. Charles W. Fox, Jr., at his parish in Kansas City and asked him to come to Baltimore and organize a new “colored congregation.” Arriving on January 1, 1948, Fr. Fox began surveying and holding House-to-House meetings on Sunday evenings, and the diocese bought a row house for the new congregation in 1949. The article continued, “The location at 1800 North Broadway is most appropriate for the new work since it is in the midst of the new Negro settlement.” The vicar and his family lived on the second and third floors of the row house, and the worship space on the first floor comfortably seated 45. On November 27, 1949, 17 members of St. James’ Church, Lafayette Square officially transferred their membership to St. Matthew’s and served as a nucleus of the new mission. The focus on children included daily religious instruction, evening youth groups, a day care program, as well as acolyte training. Fr. Fox was called to Charlottesville, VA, to revitalize a parish there in 1952, but the groundwork had been laid.

In 1953, the diocese bought a former German Methodist church on Lafayette and Bond Streets, and St. Matthew’s Mission congregation moved into larger facilities. The founding vicar, Charles Fox, returned in 1957, continuing his ministry to neighborhood children and their families, visiting parishioners at work sites, and riding his bicycle to visit them at home. Adult leaders made sure St. Matthew’s youth were involved in diocesan camps and youth events, and a Head Start program flourished. But the building was in dire need of repair, and the flourishing congregation began looking for new opportunities to grow.

In the spring of 1971, with the approval of Bishop Harry Lee Doll, the two missions, St. Matthew’s and the Church of Our Savior began talking about merging their congregations. As the year progressed the congregations worshipped together, prayed together, got to know each other and negotiated. They decided to drop the names of both congregations and rename themselves the Church of the Holy Covenant as of June 1, 1972. Joint vicars were appointed, a joint Advisory Board chosen and “the two congregations covenanted to live and worship and work together as one flock.” By 1985, Holy covenant claimed 220 baptized members, but even more change was around the corner… 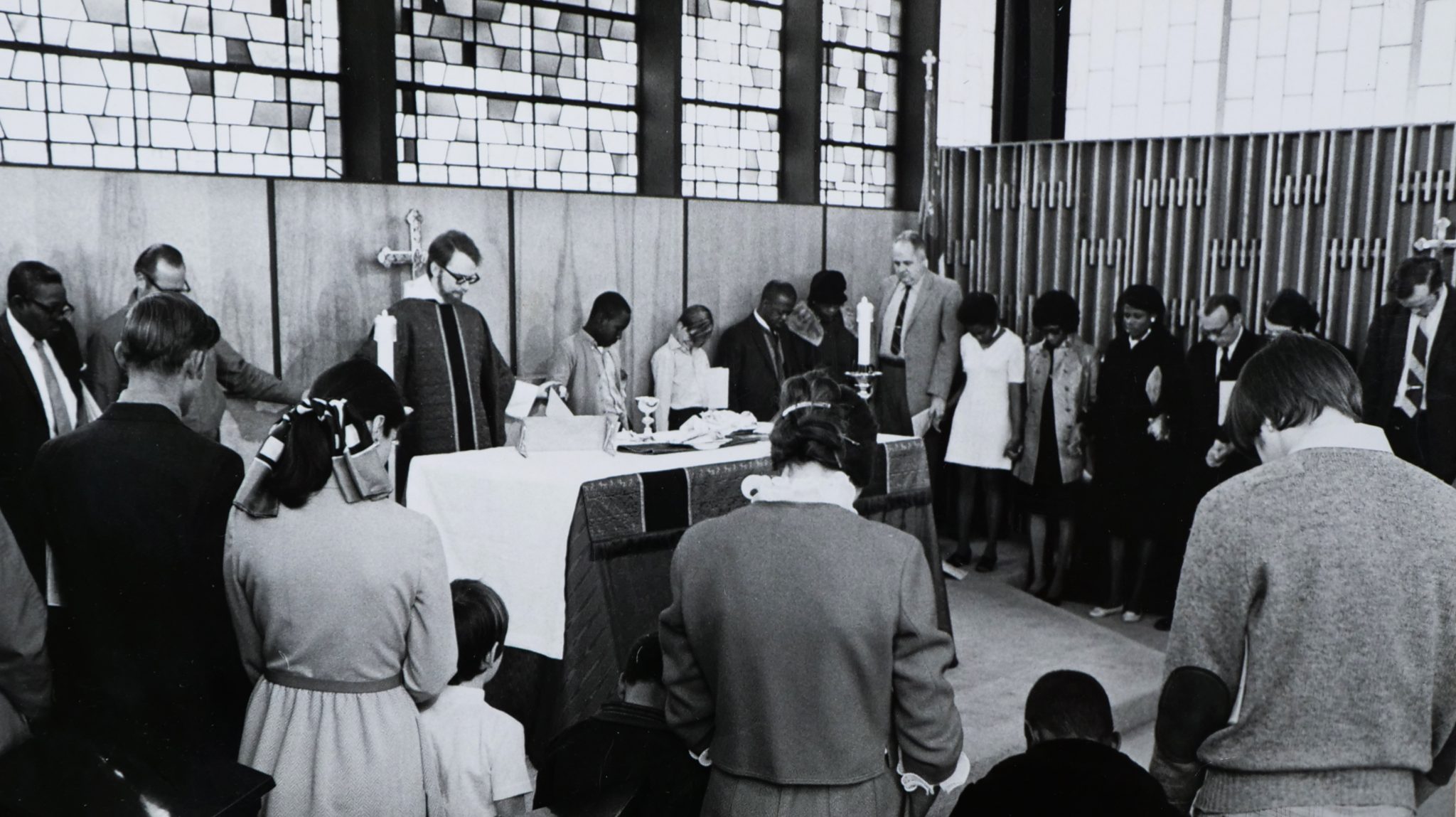 St. Matthew’s and Church of Our Savior worshiping together as Holy Covenant