The Church of the Holy Covenant, Part II 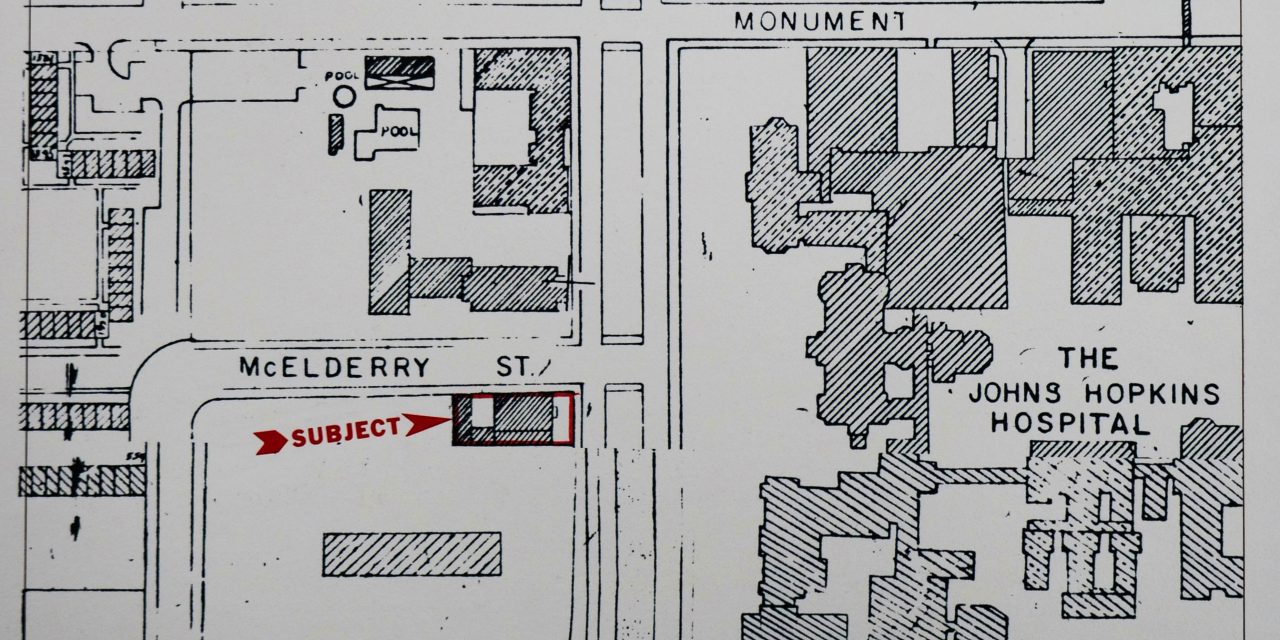 Looking at the sprawling campus of the Johns Hopkins Hospital today, it is hard to imagine that the little Church of the Holy Covenant was once in the middle of a controversial expansion plan. In January of 1986, the diocese received the first official letter from the hospital expressing interest in purchasing the property which housed Holy Covenant so that they could build a new ambulatory care facility. Dr. Robert M. Heyssel, who was President of the hospital board indicated that “a number of conversations” had already taken place, and that the hospital was offering $1 million for the property.

Months of meetings followed. The congregation met; the Standing Committee met; the Diocesan Council met; the bishop’s staff met; the regional clergy met. Interestingly, more objections to the congregation relocating came from area clergy than from anyone else. The Canon to the Ordinary, John Kitagawa, reported to Bishop Theodore Eastman that the “basic concerns expressed: a.) already too many churches competing; b.) objection to a predominantly black church; c.) Holy Covenant would threaten growth of nearest Episcopal churches.”

Bishop Eastman promised the people of Holy Covenant that if they decided to move, their new building and relocation costs would be totally paid for. Although the relocation of Holy Covenant had not been initiated by the congregation, nor by the diocese, the people of the church realized that very soon, the Broadway and McElderry corner would be completely surrounded by the hospital’s ever-expanding campus. Some parishioners felt that the huge corporation was exerting real pressure on the little congregation to sell. One parishioner remembered, “Hopkins was determined that we were going to get out, so they started digging all around us, and cracks started appearing in the walls. We decided we had better accept.” 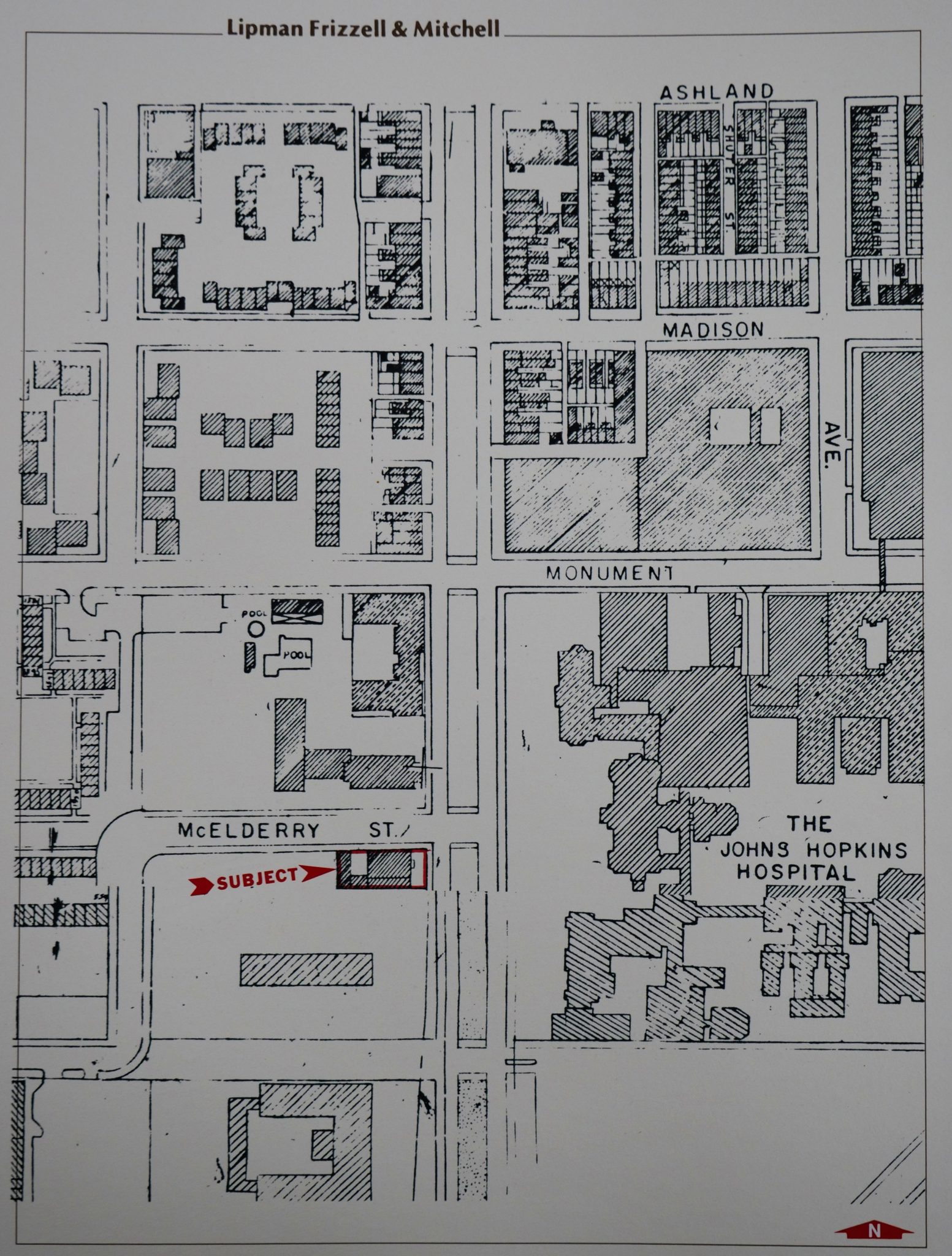 The bishop finally responded to the January letter on October 29, 1986. “Our concern is that the Diocese wishes to retain the ability to minister to the Hospital community and to the Church of the Holy Covenant. A Diocesan committee composed of doctors, priests and others is being established to review how the Diocese can most effectively serve the Hopkins Hospital community.” In a closing salvo, he added, “We intend to maintain the Episcopal Church’s physical presence in the hospital complex… Our monetary requirements to relocate the congregation are $1,350,000.”

After the diocesan committee made its recommendations, the congregation agreed to move, and discussions took place in the Standing Committee. Bishop Eastman wrote Dr. Heyssel on January 14, 1987. While agreeing that the congregation of Holy Covenant would be taken care of, he added, “…It is our desire to base the ministry of an Episcopal Chaplain in a new, centrally located facility, comprising a chapel and suitable office and conference space… We propose this facility be included with the proposed Ambulatory Care Building. The chapel … would be inter-faith in nature and hence open to the use of all.” Finally in June of 1987, the Maryland Church News ran an article announcing the sale of Holy Covenant and their impending move to somewhere in the northeast area.

With a final service at the Broadway site on July 19, 1987, the congregation said goodbye to its home, and moved into temporary quarters at the Lutheran Church of Our Savior, at 33rd. Street and the Alameda. They packed up their belongings, including nine original oil paintings which made up the Stations of the Cross and the stained glass window around the altar, and set about finding a new place to call home, as well as a new minister to lead them. During most of the time discussions had been progressing, the congregation had been without a vicar, and relied on supply priests.  Canon Kitagawa wrote to the bishop in May of 1988, “The people of the Church of the Holy Covenant have struggled valiantly against a lot of odds, without stable clergy leadership for a very long time. Lesser people, people of less faith, would have faded away by now.” 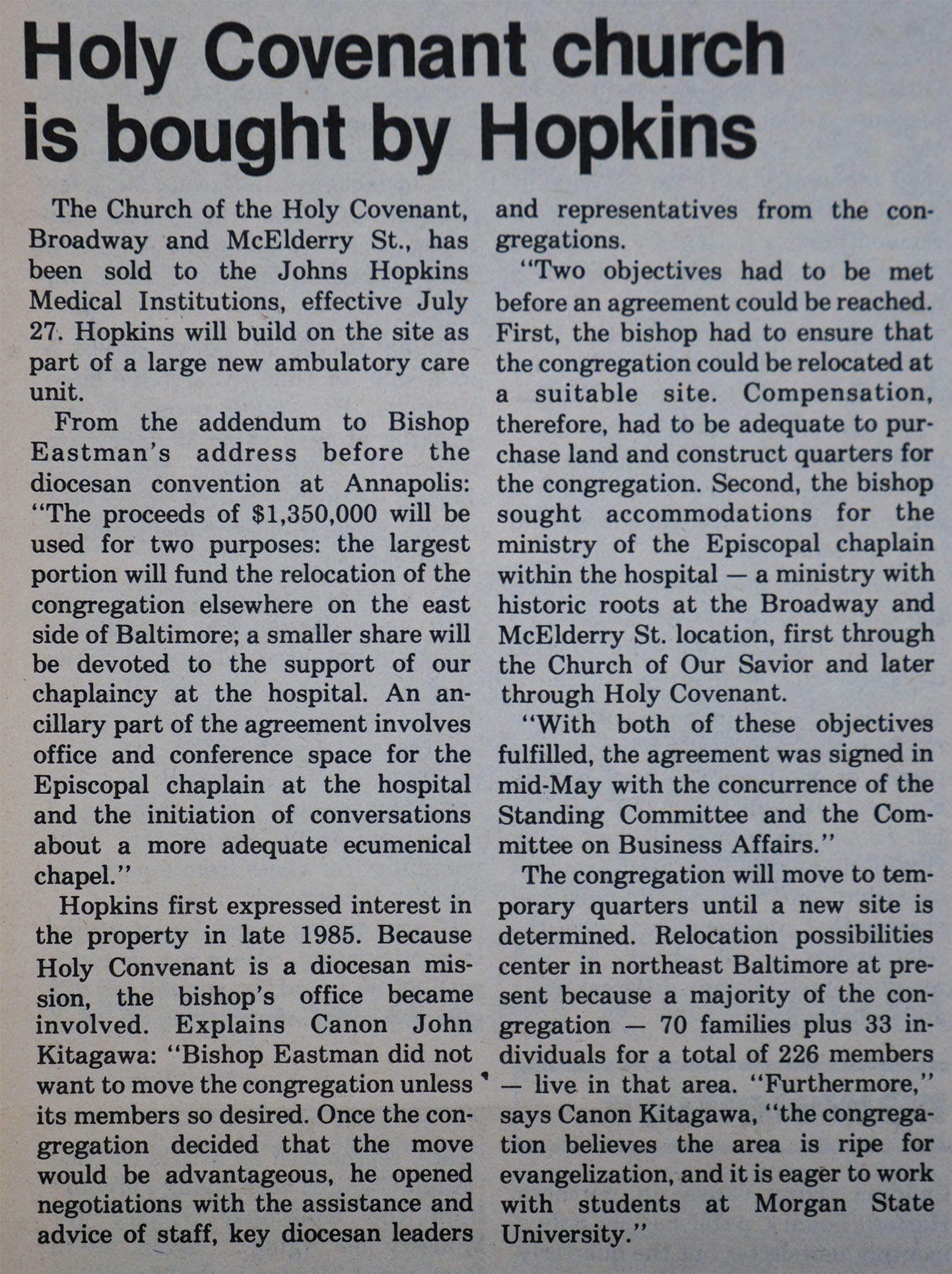 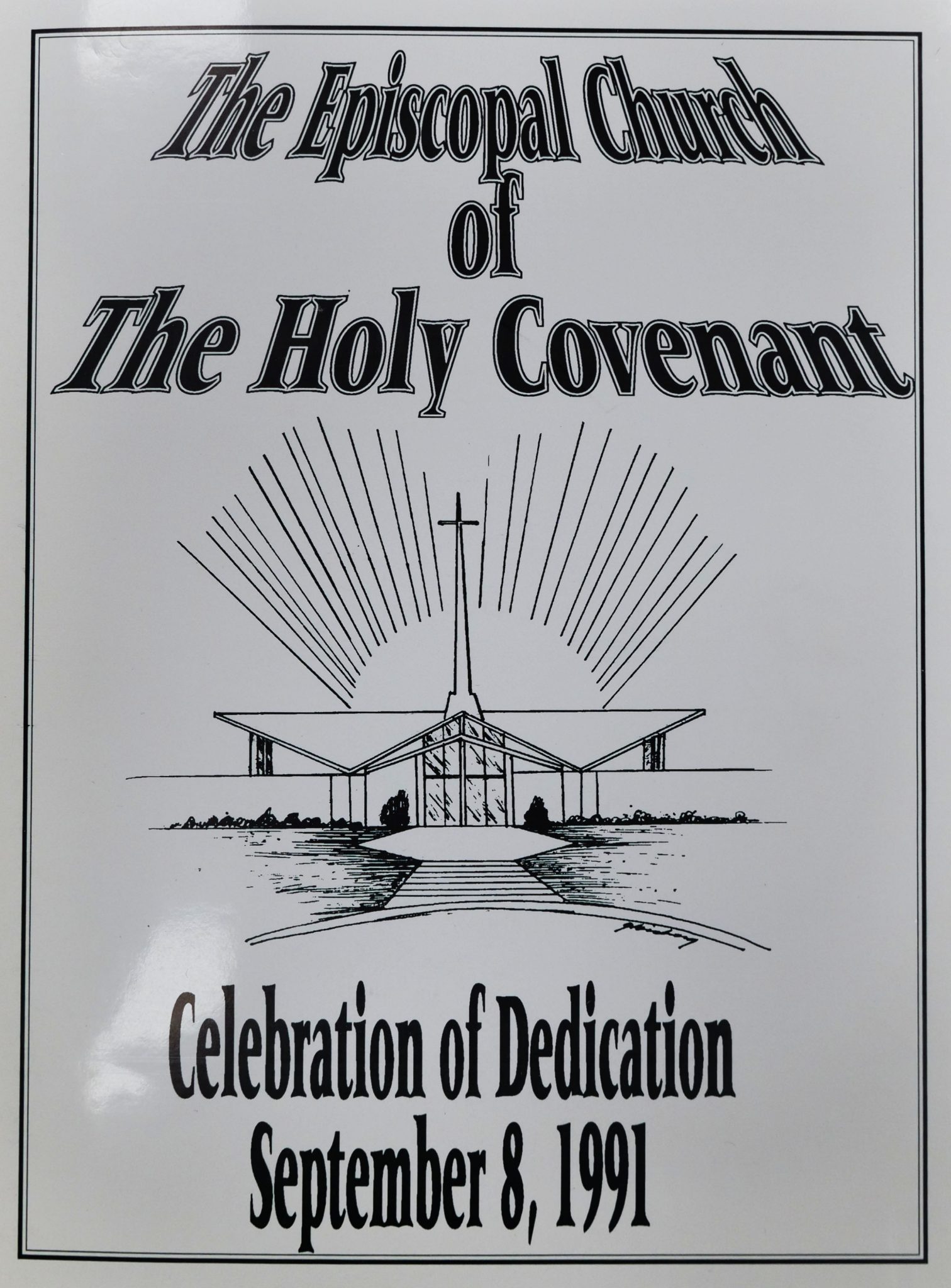 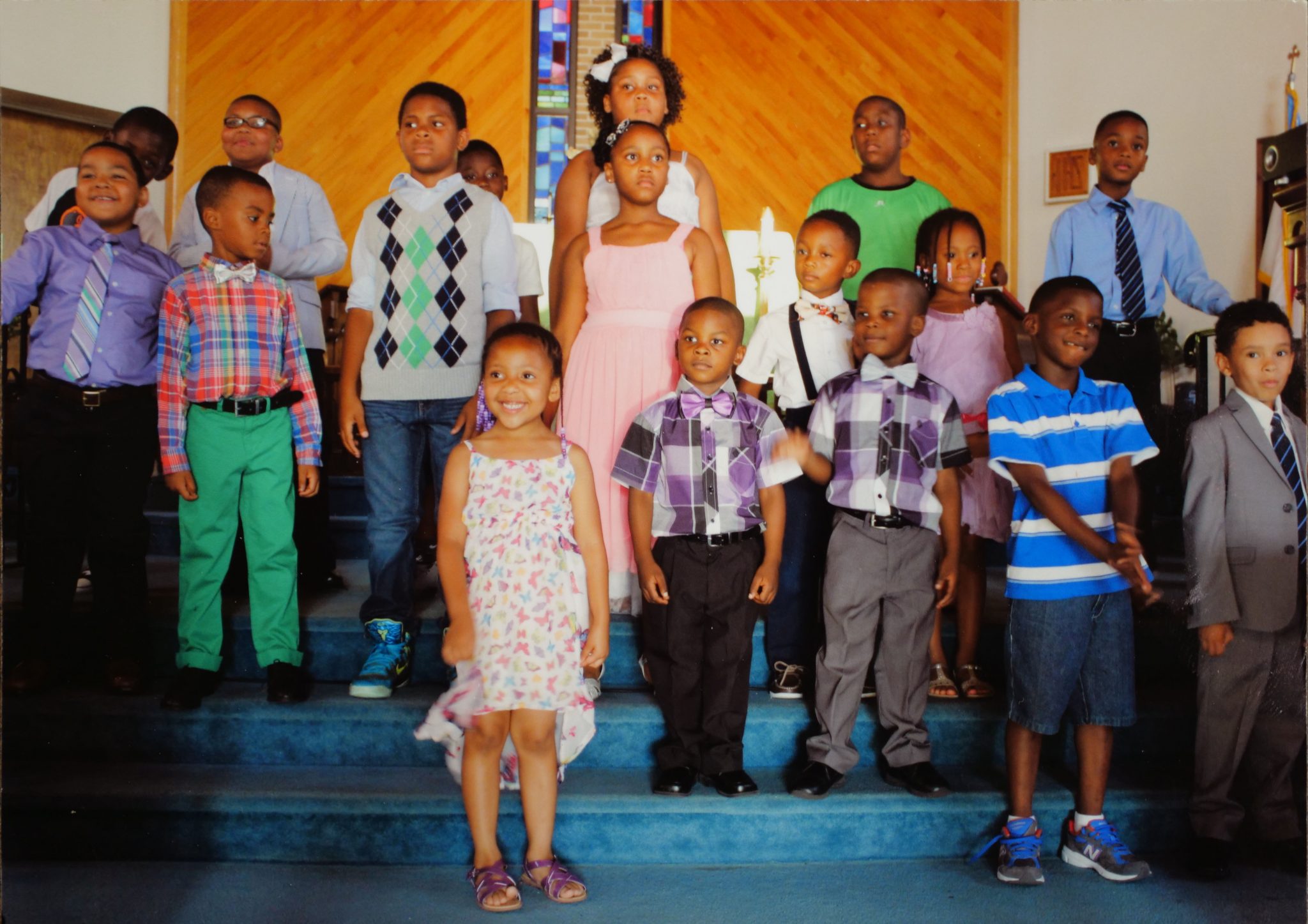 Campers from Camp Excel at Holy Covenant (photo taken around 2010)

A vacant lot on The Alameda was finally chosen, and ground broken for the new church building on April 29, 1990. To counter objections and fears from area clergy, Canon Kitagawa wrote, “There are plenty of unchurched people in the area to fill all of the existing churches and the Church of the Holy Covenant.” In a letter to Bishop Eastman, Carroll Marcus, Senior Warden of Holy Covenant wrote, “The psychological trauma of having to relocate has been assuaged by the prospects of a new church facility on a more spacious lot in an attractive neighborhood which seems to have potential for the growth of Holy Covenant”

Holy Covenant’s new building was dedicated and consecrated on September 8, 1991. The blond pews from the 1959 building and some of the stained glass from that building brought a modern touch, while the prayer desk and baptismal font from the 1870 church lent continuity. Even though some of their furnishings had been damaged while in storage, the congregation was anxious to get their new ministry started.

By May of 1994, the congregation was ready to ask diocesan convention to recognize them as a “Separate Congregation” instead of a diocesan mission, and that momentous step was approved on May 21, with the convention singing “The Church’s One Foundation” in thanksgiving.

The Church of the Holy Covenant has always been committed to work with children, and Camp Excel is a perfect example of its outreach. A six-week day camp for academic enrichment and recreational activities touched children in the neighborhood with additional training in violence and drug use prevention. A rare tornado hit the neighborhood in November, 2010, and displaced more than a dozen families whose children attended Yorkwood Elementary School. The congregation and its rector, Dion Thompson, gathered donations from all around the city to support the families as Christmas approached. Originally only their own parishioners donated, but the project quickly grew into a joint effort with several other school communities contributing to the drive.  Clothing, toys, books, coats and household goods were amassed and distributed. The rector said, “For people of faith, this is our faith. This is the best sermon to be preached, the sermon of action.”

Despite decades of struggles, setbacks and challenges, the faithful of the Church of the Holy Covenant look toward what the future holds as they strive to live out their Mission Statement “to empower disciples to proclaim the Gospel and honoring God with ministries that reveal his love to the world.” 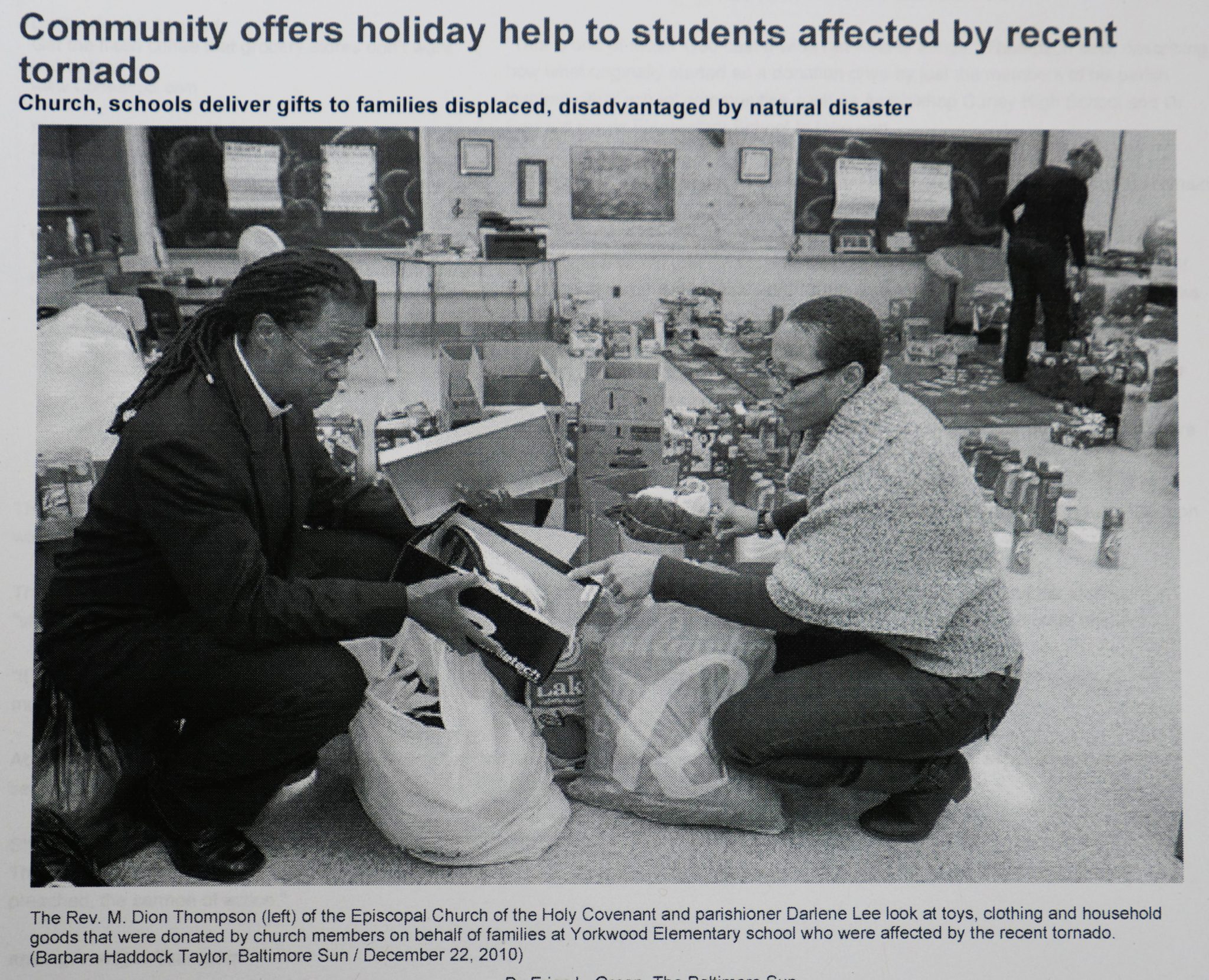