From the Archives: Thanksgiving 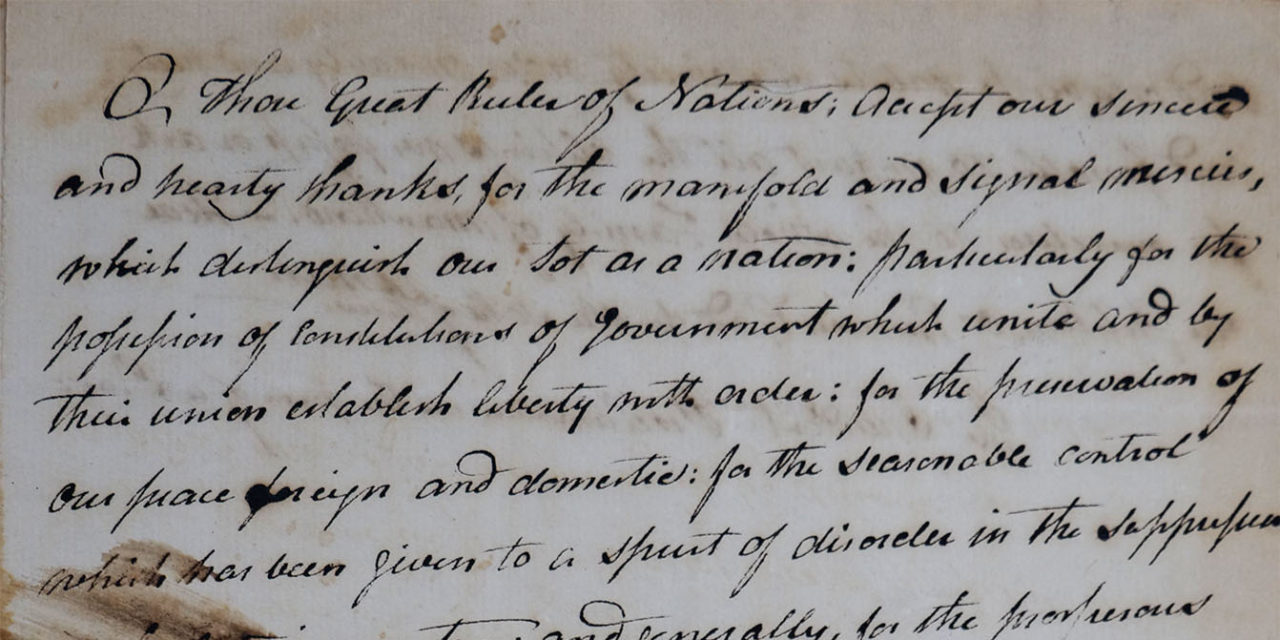 Following Independence in 1776 and the end of church taxation in Maryland in May of 1788, the vestry of St. Peter’s Parish in Talbot County wrote to parishioners concerning their plans to financially support themselves. Parishioners were to enroll shortly after Easter, and in June the vestry was to “apportion by Poll the sum which each shall contribute towards the expenses of the parish.” Then each member was to “appear at the church the first Thursday in November (set apart as a Day of Prayer and Thanksgiving for the Fruits of the Earth) and pay into the hands of the Registrar.” This is an early reference to a day set aside for thanksgiving for the “Fruits of the Earth,” which was a common practice in many civilizations around the world, and making its way towards becoming an official American holiday. 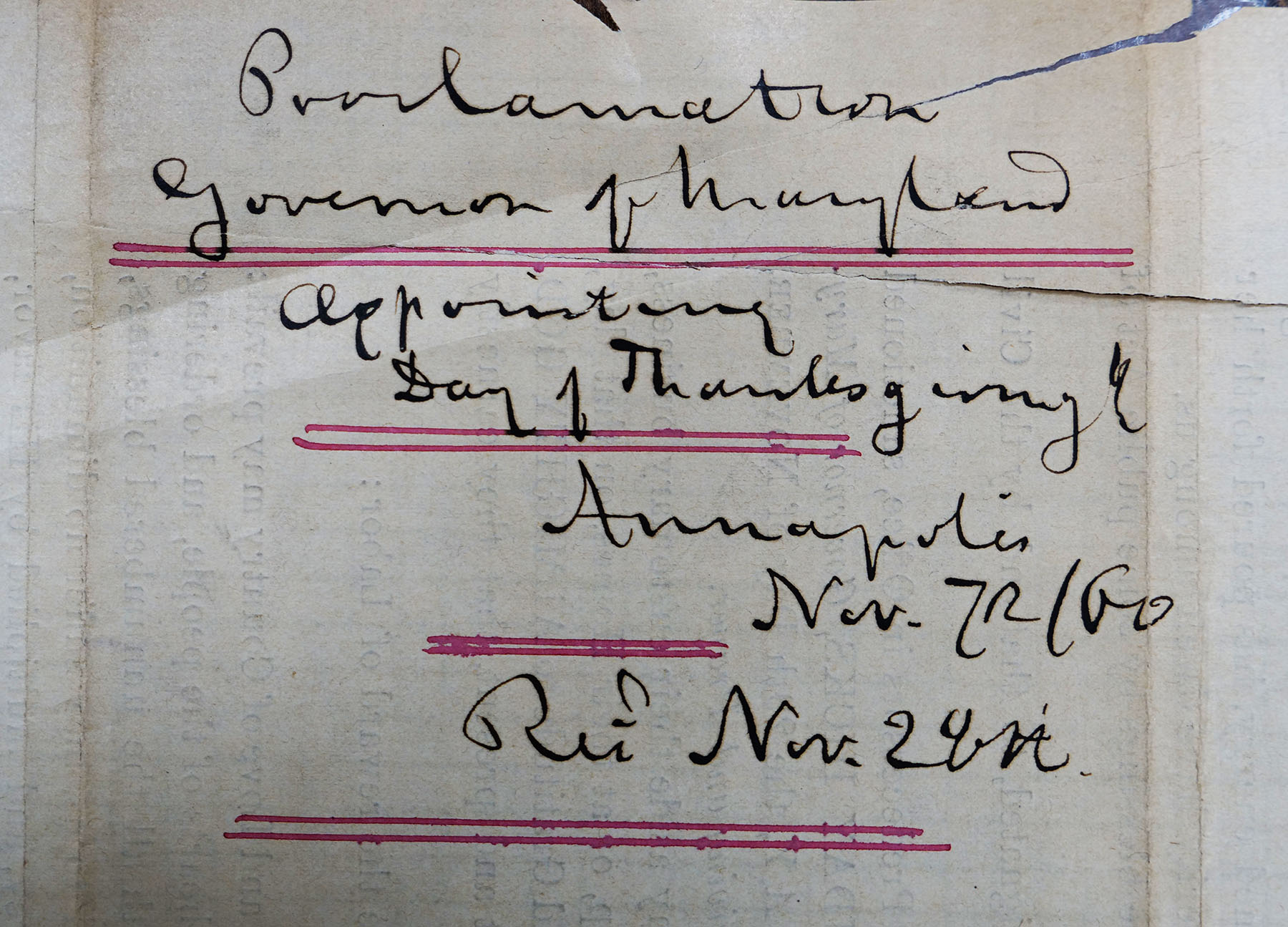 The first presidential Thanksgiving proclamation had nothing to do with pilgrims, or harvest bounty, or family gatherings, but was “to commend to the people of the United States a day of public thanksgiving and prayer to be observed by acknowledging with grateful hearts the many signal favors of Almighty God especially by affording them an opportunity peaceably to establish a form of government for their safety and happiness.” Ordered by President George Washington on October 3, 1789, the Thanksgiving Proclamation came at the request of both Houses of Congress. President Washington’s second Thanksgiving Proclamation was issued on January 1, 1795 at the conclusion of the Whiskey Rebellion. The so-called “whiskey tax” imposed by the newly formed federal government was the first tax on a domestic product. But on America’s western frontier, farmers, having objected to the tax for four years, stormed the home of the tax inspector. President Washington himself rode to western Pennsylvania with 13,000 militiamen, and the rebels all went home before there was any confrontation. In Washington’s mind, this demonstrated that the new federal government could successfully handle resistance to even unpopular laws. So he asked everyone to set aside Thursday, February 19 to give thanks for the “seasonable control which has been given to a spirit of disorder in the suppression of the late insurrection.”

On Maryland’s Eastern Shore, as rector of Great Choptank Parish, future bishop of Maryland James Kemp turned the president’s proclamation into a prayer. “O Thou Great Ruler of Nations: Accept our sincere and hearty thanks for the manifold and signal mercies which distinguish our lot as a nation…”

Governors, Congress and presidents often called for days of prayer and thanksgiving for various purposes. The House of Bishops met in Special Convention in October and November of 1821 in Philadelphia, where Bishop Kemp preached on the first day of the meeting. The notation for Thursday, November 1, read, “This being Thanksgiving Day, the bishops attended Divine Services in the several churches.” So it seems that the notion of a Thanksgiving Day service was widespread by 1821. 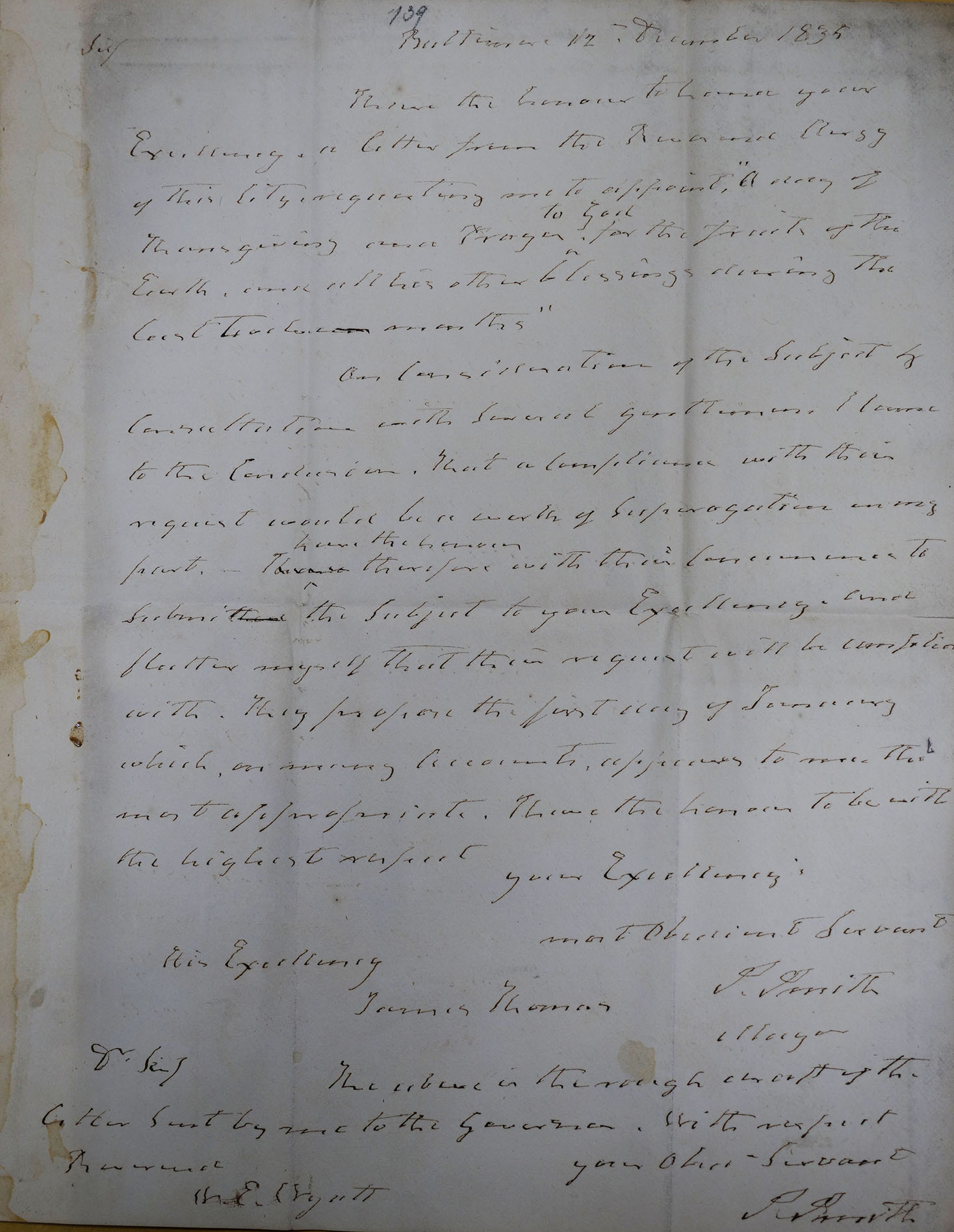 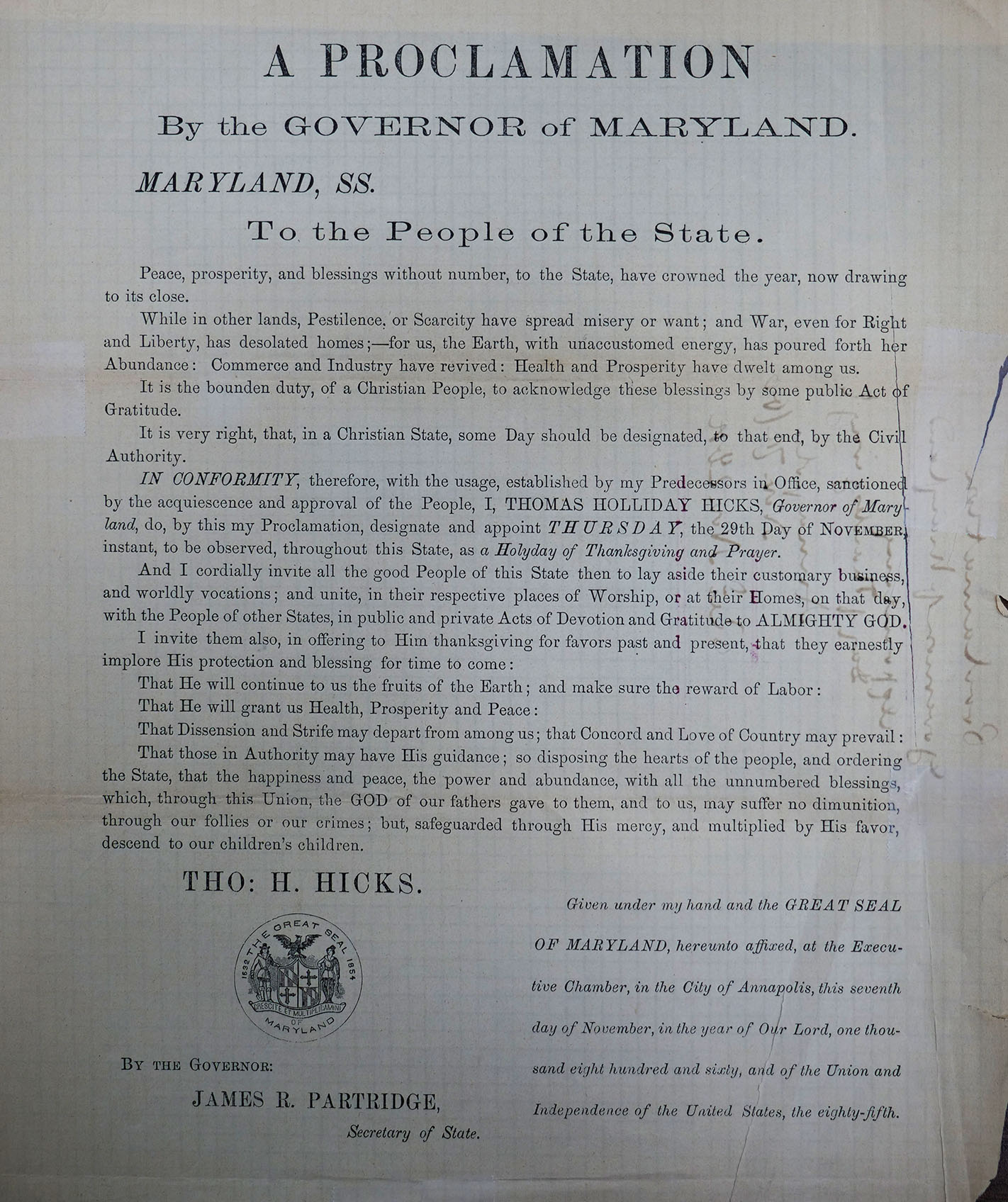 Proclamation from Governor to the State of Maryland 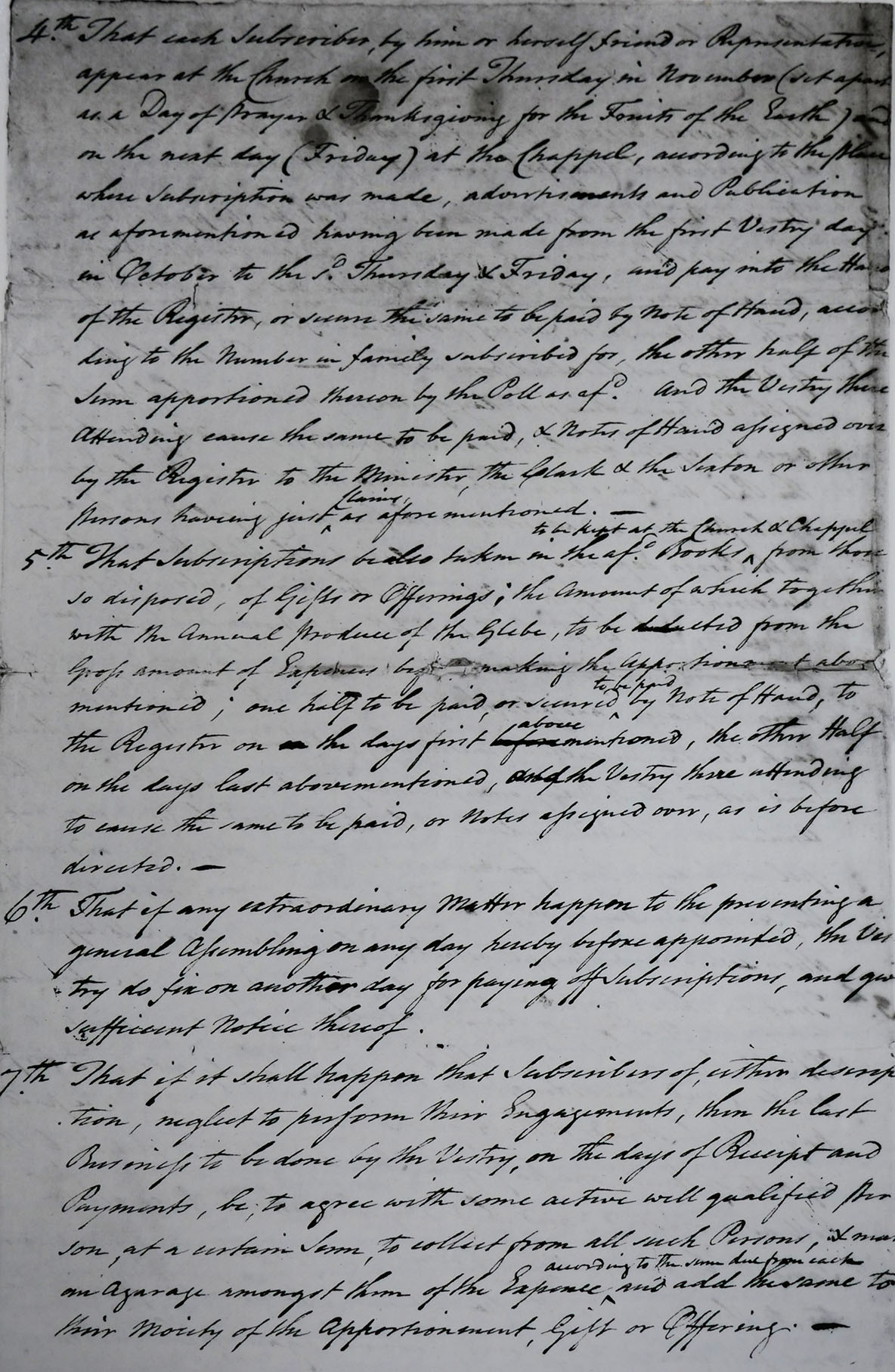 Letter from St. Peter’s vestry to the congregation, 1788

In 1835, the Rev. William Wyatt, rector of St. Paul’s parish in Baltimore, rallied the clergy of the city and wrote to the mayor of Baltimore, Samuel Smith, asking him to set aside a “Day of Thanksgiving and Prayer to God for the Fruits of the Earth and all his other blessings during the last turbulent months.” Indeed, there had been turbulence! The failure of the Bank of Maryland in March of 1834 caused the loss of millions of dollars which had belonged to individuals. In Baltimore, four days of riots in August resulted in smashed windows, home destruction, bonfires made from the libraries of bankers, and looters in the streets. The mayor, Jesse Hunt, resigned, and 83-year-old General Samuel Smith, hero of the defense of Baltimore during the War of 1812, turned back the rioters and took over as mayor. Mayor Smith reported to William West that he had written the governor, James Thomas on December 12, asking him to declare such a Day of Thanksgiving, but the governor’s term expired on January 14, and we have no record of his response.

Bishop William R. Whittingham, from 1843 onwards, pushed successive governors of Maryland to set aside an annual Day of Thanksgiving, and he encouraged all his clergy to hold services and preach on the topic of thanksgiving on the day specifically set aside. The designated date changed almost yearly, but was most often sometime in November, after the harvest. Thanksgiving did not become a federal holiday until 1863, when President Lincoln declared the last Thursday in November to be set aside for “Thanksgiving and Praise to our beneficent Father who dwells in the Heavens.”

But the person who pushed hardest and longest for Thanksgiving to become a national holiday is unknown to most Americans. Sarah Josepha Hale, the editor of Godey’s Ladies’ Book, and author of “Mary Had a Little Lamb”, began her one-woman crusade in 1827, saying, “We have too few holidays. Thanksgiving, like the Fourth of July, should be considered a national festival and observed by all our people.” In 1847, she wrote, “the Ladies’ Book, suggests that, from this year, 1847, henceforth and forever, as long as the Union endures, the last Thursday in November be the day set apart by every state for its annual Thanksgiving.” She even thought the holiday might avert the war which was looming, by fostering a “moral and social reunion of the people.” She rejoiced in 1863 with Lincoln’s proclamation of a national holiday.

Thanksgiving became a political football during Franklin D. Roosevelt’s presidency. From 1939 to 1941, he declared the next-to-last Thursday of November to be Thanksgiving Day so that merchants would have a longer Christmas selling season, hoping to uplift the Depression economy; but half the states objected, calling it an “affront to Abraham Lincoln.” Finally both houses of Congress solved the problem by declaring that from 1942 onwards, the fourth Thursday in November would be Thanksgiving Day.

Perhaps, to add perspective to the long and busy holiday season, we should take to heart the Collect for Thanksgiving Day: “Almighty and gracious God, we give you thanks for the fruits of the earth in their season and for the labors of those who harvest them. Make us, we pray, faithful stewards of your great bounty, for the provision of our necessities and the relief of all who are in need…”