Baltimore Sun – Holy communion: As they observe Advent, two churches in the Towson area prepare to merge into one 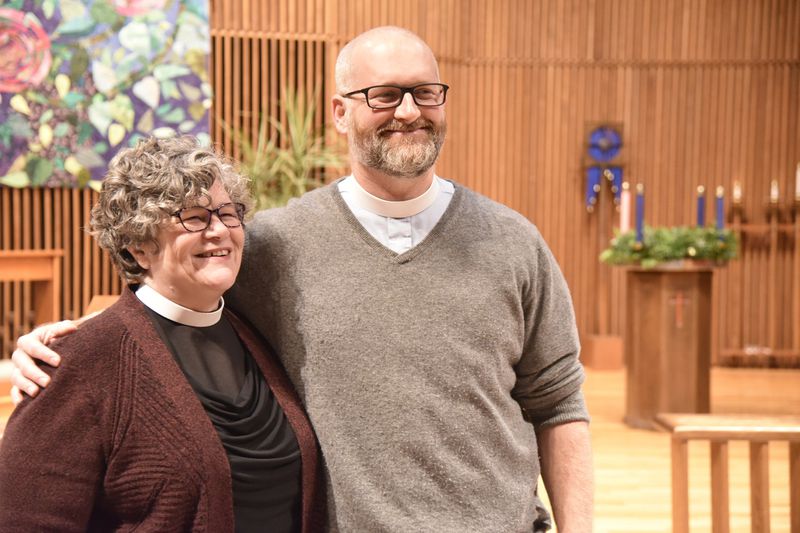 Read the story in the Baltimore Sun or on Maryland Episcopalian below:

December, for practicing Christians, is not just the last month of the year and a time to stock up on gifts; it’s Advent, a season in the liturgical year in which believers wait and prepare to celebrate the birth of Jesus.

For two Episcopal churches in the Towson area, Advent this year is taking on added significance, as the congregations wait and prepare not only for Christmas, but for their merger into one house of worship.

St. Thomas’ in Towson and Epiphany in Timonium, built in 1970 and 1964, respectively, will merge their vestries and become St. Thomas/Epiphany Episcopal Parish, or “STEEP,” for six months while church leadership develops a new name. The combined congregation will use the Epiphany building, at 2216 Pot Spring Road in Timonium.

The rectors of each church, the Rev. Loree Penner of St. Thomas’ and the Rev. Kristofer Lindh-Payne of Epiphany will become co-pastors when the joining becomes official on Jan. 1, and the Rev. Dr. Amy Slaughter Myers, currently of Epiphany, will continue to serve as associate rector of the church.

The move to merge the congregations, though decided by a unanimous vote of both vestries, has not been an entirely smooth one. For example, some members of St. Thomas’, located at 1108 Providence Road, have known that church their whole lives and raised their children there.

Penner said some involved with the work to merge the churches “are starting to mourn what was,” as the reality of the new combined church approaches.

At the same time, though, Penner said the move is breathing some life into the two congregations — and her own work.

“It’s so great to not have to do palliative care until it’s over, but to have hope for our future,” she said.

Both churches have experienced membership declines.

Loree said St. Thomas’ has seen its average weekly attendance drop in recent years. Lindh-Payne said Sunday morning worship numbers are down, but the church still has a wide impact because of the work that takes place through its community center.

The two churches, of course, are not alone.

The Episcopal church in the United States is not exempt from the trend, though the percentage is smaller: In 2007, about 1% of the population identified as Episcopalian, a percentage that was down to 0.9% in 2014. Most mainline Protestant denominations saw decreasing numbers in that same period, according to Pew, as did the Catholic Church.

Emily Bailey, an assistant professor of religious studies at Towson University, said it’s “not open to debate” that religious identity in the United States is shifting.

But there’s “not really a hard and fast reason why,” she said.

It might have to do, in part, with younger people marrying later and having children later, both of which are life events affiliated with people returning to a church congregation, Bailey said. It also might have to do generally with it becoming more socially acceptable for people to not outwardly affiliate with an organized religion.

And for some, it might have to do with younger people self-identifying as “spiritual” but not religious — that is, picking and choosing different aspects of different faiths and applying them to their lives, but not identifying as a member of any one religious community.

“The sense now is that when people say they are religious, it usually means they are affiliated with some sort of a religious institution, so they’re subscribing to … certain things, and have a very strong communal identity,” Bailey said. ” Where the sense of the spiritual now, is more self-focused.”

For a period of months, the two congregations have been meeting regularly to discuss how the merger might work. They’ve looked at data, drawn up tables and imagined how programs from both congregations — from home-schooling to food banks to community centers to weekly dinners — would fit into either building.

Ultimately, because Epiphany is larger and some of the community members it serves through its programs would be less able to get to St. Thomas’ and because St. Thomas’ real estate might be easier to sell and for countless other reasons that emerged as the congregations worked together, they chose the Epiphany campus on Pot Spring Road.

While the new church community is operating out of Epiphany for now, that might change in the future.

“The process that we built really oriented us, not toward one facility or the other, but potentially a third facility,” said Jay Boggs, a lay leader from Epiphany.

Boggs worked with Jan Bahner, another lay leader from St Thomas’, to facilitate the two congregations in the process of becoming one community. Both said it was a very lay-driven process, with decisions and discussions happening among members of the churches, not just the church leadership.

Bahner said about nine teams were developed to discuss the particulars, like community center programs or what worship would look like, with a co-leader from each congregation.

Bahner, who’s leaving her old church building, said she was “a little sad on one hand,” because of “the ending of my life at St. Thomas’.”

“But I am overwhelmingly more excited by the opportunities we have together to serve Christ,” she said.

Boggs agreed. He said “a lot of talent” came together to work on the merger, and that it breathed a lot of life into the new congregation.

The Rev. Scott Slater, canon to the Ordinary for the Episcopal Diocese of Maryland — a position similar to being a chief operating officer — said in a statement that the diocese has “enthusiastically supported [the congregations] as they become a model for other congregations” in sharing resources and thinking about the future.

The two churches merging are not the first in Maryland to do so. Earlier this year, for example, a Lutheran church and an Episcopal church in Arbutus joined together as a new worship community.

Carrie Graves, a spokeswoman for the Episcopal Diocese of Maryland, said there are “some partnerships” between church communities that already exist, and some that are in the works.

Though a sermon by Slaughter Myers, the associate rector, never explicitly mentioned St. Thomas/Epiphany Episcopal Parish, it may as well have. Delivered on Dec. 8 to both congregations simultaneously, she talked about John the Baptist and his time in the wilderness, his time not in “any fixed place,” and his having left the community and family that raised him.

The wilderness, Slaughter Myers said, is “a pretty rough place and a pretty hard time.”

But, she said, the wilderness, as disorienting as it can be, is also where “God shapes God’s people,” and that time in the wilderness is holy.

There is a piece of scripture often associated with Advent, the 11th chapter of the book of Isaiah in the Old Testament. It’s a prophecy that describes what the world could, or would, be like according to some Christian interpretations, after the birth of Jesus.

It describes a shoot coming up from a stump, and then describes a message of hope for the future — the wolf and the lamb will live together in harmony, the cow will feed with the bear, and the Earth will be filled with a holy knowledge.

Earlier this year, two ash trees on the Pot Spring campus that merge together at their bases died, even after “several years” of trying to treat them, Lindh-Payne said. But over the summer, as the two vestries were discerning whether to merge into one congregation, there was new growth.

From the stumps, a new shoot.

Cody Boteler is a reporter covering communities in Baltimore County and Baltimore County issues. He came to the company from Industry Dive, where he covered waste, recycling and climate. He graduated from Towson University in May 2017 with a degree in journalism and environmental science.