From the Archives: The Impact of World War I on the Diocese of Maryland 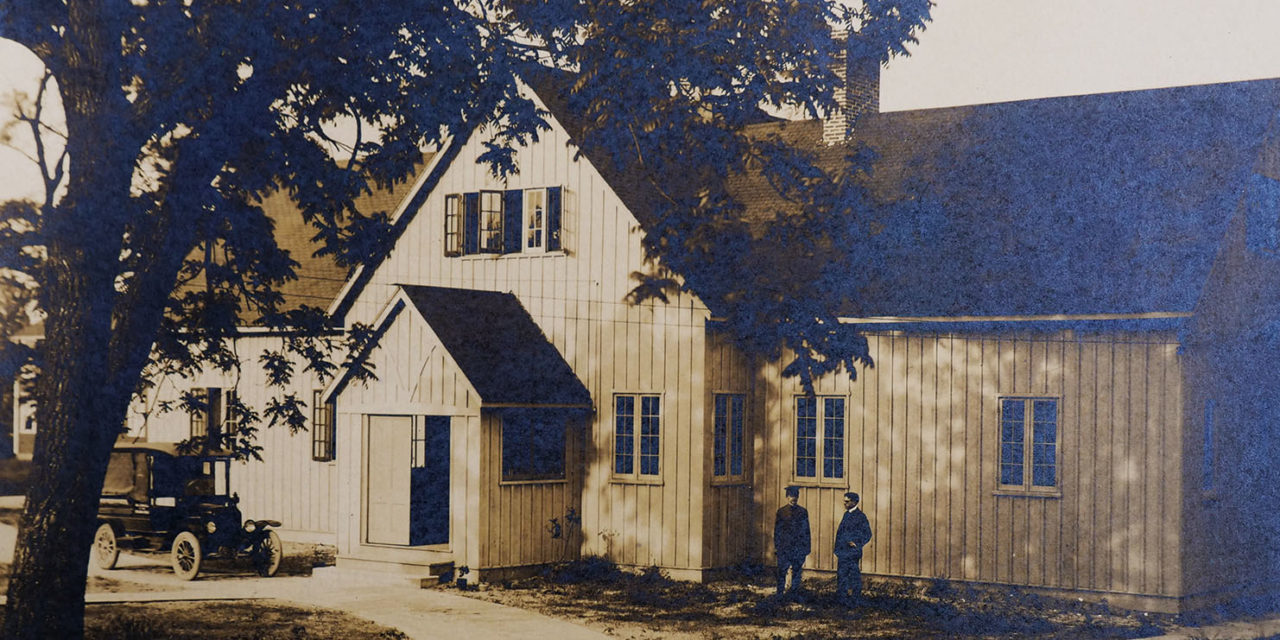 The United States declared war on Germany on April 6, 1917, Good Friday, entering the hostilities which had been going on in Europe since 1914. Eventually, the U.S. would send over 2 million soldiers into the war, calling it “The War to End All Wars”. More than 16 million people died as a direct consequence of the fighting during the five years the war raged, but an even more tragic killing machine operated at the same time – the flu epidemic, which killed an unbelievable 50 million people worldwide. Between September 20 and December 31, 1918, there were over 75,000 case of the flu estimated in Baltimore alone, and over 5,400 city residents perished. Hard hit were the very young, with 29 % of the deaths claiming infants under the age of one year; and over 10 % of the deaths occurred in young adults 20-44, so soldiers gathering at Camp Meade and Edgewood Arsenal were vulnerable.

The Bishop of Maryland, John Gardner Murray, immediately following the Declaration of War, issued a pastoral letter, included a set of collects, and made several suggestions to his diocese. He first suggested that all eligible men enlist; that even those who were exempt should waive their exemption and enlist; that those who were ineligible should assume reasonable responsibilities; that legislation should be passed to “provide reasonably for the support of the families of all enlisted men”; and that “we should all pray continually for Divine guidance in this titanic universal struggle”. State National Guards were federalized on August 5, 1917, and over 6,800 members of the Maryland National Guard deployed to Camp McClellan, Alabama, which the Diocesan bishop visited often. Fort McHenry housed the Army General Hospital #2; Aberdeen Proving Ground and Camp Meade were created. Over 62,000 Marylanders served in the First World War, including over 11,000 of African-American descent, and nearly 2,000 Marylanders died in the conflict. 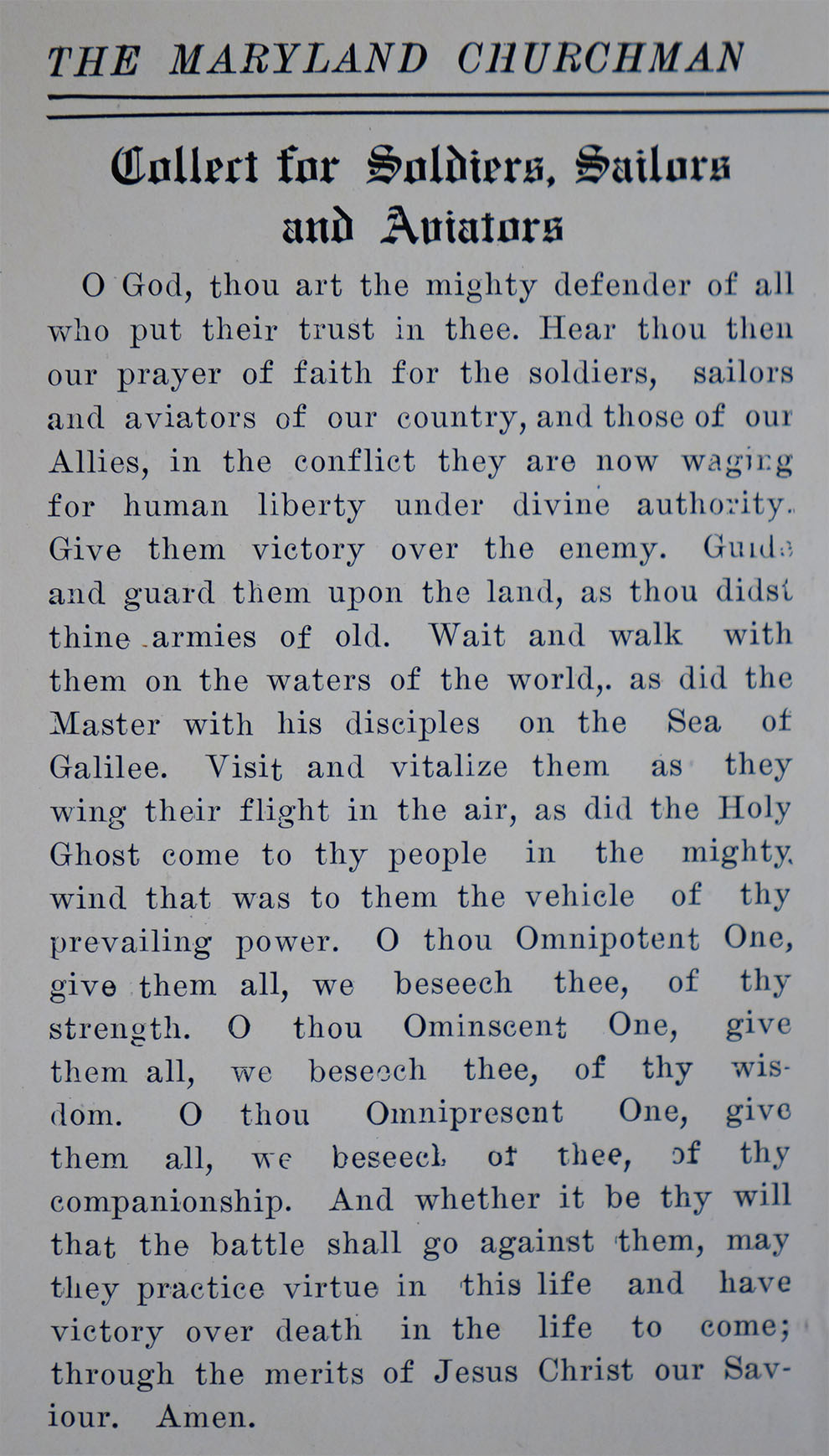 Collect for Soldiers, Sailors, and Aviators

The government contracted to build a cantonment facility (temporary quarters for soldiers who were shipping overseas) in the area known as Admiral in Anne Arundel County, which became Camp Meade. The dioceses of Maryland, Washington and Pennsylvania cooperated to supply the camp with religious services, and Maryland clergymen who served at the Camp included Tagart Steele, A.J. Torrey, J.M. Magruder, George W. Dame, and Jesse Bicknell. Early in 1918, plans were approved to build an Episcopal chapel and clergy house in Odenton, just adjacent to the new Camp, and after only 60 working days, Epiphany Chapel was ready for worship on May 6, 1918. A month later, the chapel was turned over to Camp Meade’s commander for the benefit of the soldiers. (Today Epiphany Church, Odenton, is the only surviving World War I chapel still functioning as a parish church.)

An article in the May, 1918, Maryland Churchman, informed readers that, “There are 1793 men and boys in active war service from congregations of the…Diocese of Maryland, of whom 174 have immediate or collateral connections with the families of the clergy.” Indeed, the 1918 Convention Journal detailed the immediacy of the War’s effect on the Diocese. Bishop Murray was especially distraught over the deaths of “two of my own sons in the Faith – The Rev. Philip Howard Williams and Edmund Howard Prince.” After three years in the mission fields of Alaska, the Rev. Mr. Williams returned to Maryland in 1917, and asked to serve as a Chaplain for the duration of the war; the bishop thought he might be suited to fill a vacant parish in the diocese, and they considered the options. However, Bishop Murray wrote, “It was no earthly vacancy the Master had for him to fill, for the succeeding day he was compelled to take to his bed, a victim of that dread influenza scourge… I committed his body to the ground in peaceful Druid Ridge, in the same grave as his little niece Mary Virginia Williams”. Edmund Prince was a student at Virginia Theological Seminary, but at the outbreak of war, Prince petitioned the bishop to let him enlist. Although the bishop reminded him that he was exempt, Prince said that unless he went, he would have no self-respect, so the bishop released him. Prince went to France, and in his first battle on September 27, 1918, was killed by a fragment of a shell. 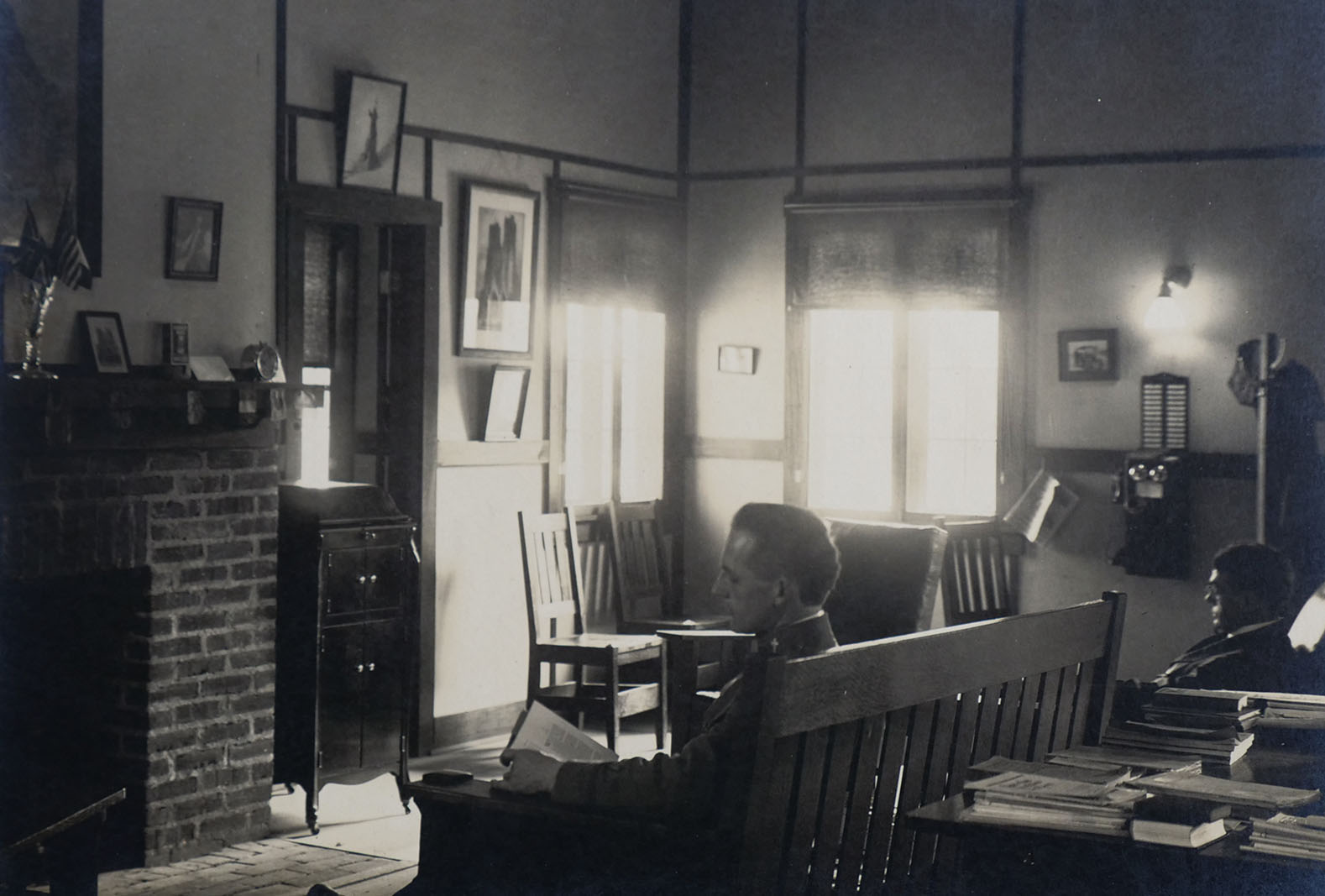 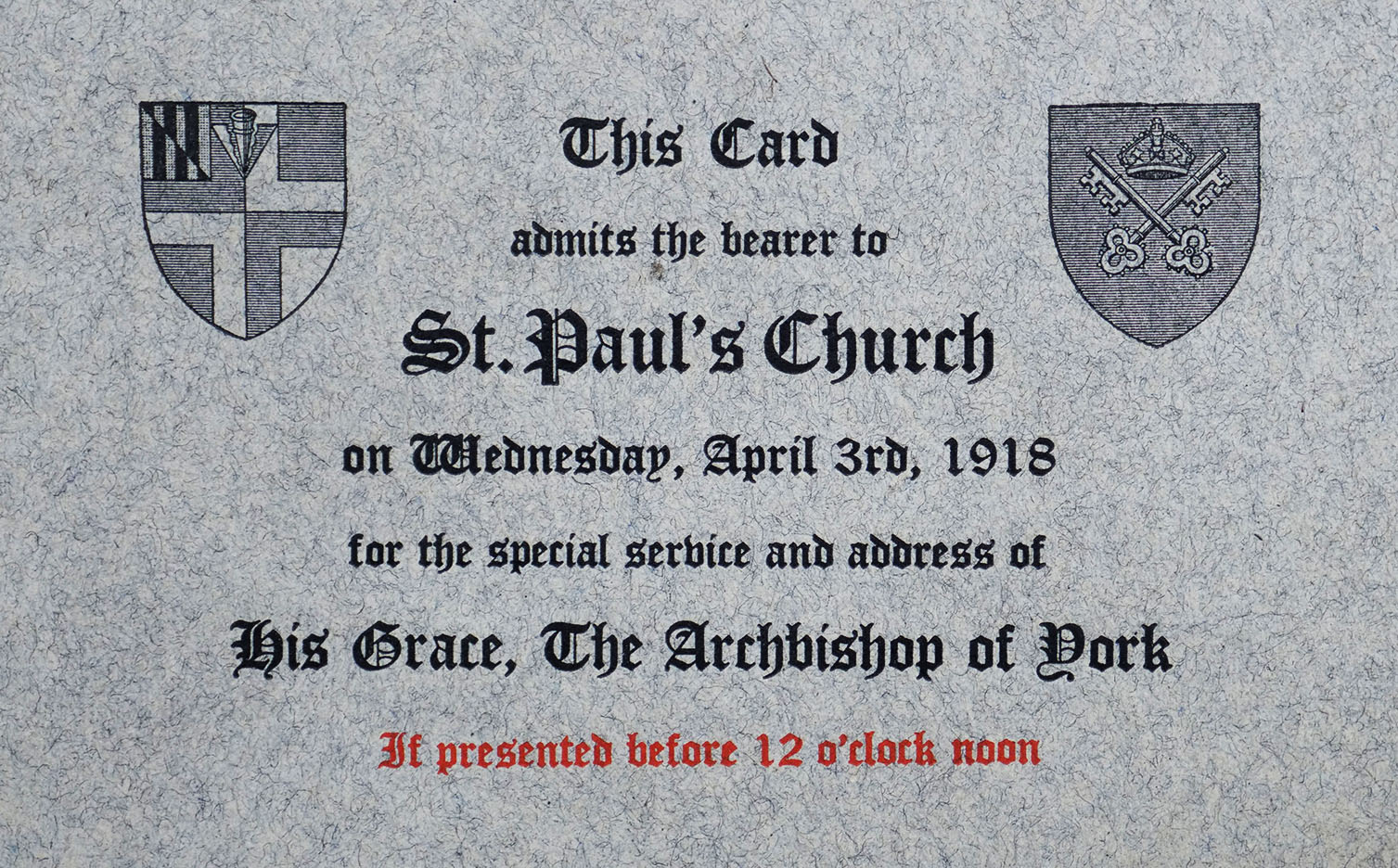 The Archbishop of York, Cosmo Gordon Lang, came to Baltimore on April 3, 1918, as a good will ambassador, to cement the friendship between Great Britain and the United States. He appeared at three venues in one day: at St. Paul’s Church in the morning, then on the grounds of the Cathedral in the afternoon and at the Lyric Opera House in the evening. One thousand admission cards were distributed for his appearance at St. Paul’s, and an equal number for the gathering at the Lyric, which was billed as a “Patriotic Meeting”. The afternoon service on the Cathedral grounds was attended by “an immense crowd”, who witnessed the Archbishop plant an elm tree. The Archbishop spoke about post-war goals, saying, “The world must come to see that might does not mean right…When we win we must prove our right to victory by using our power wisely and well, by doing away with unfair class oppression, gained by the grinding down of the poor, with false standards of living and the sway of materialism”. Bishop Murray echoed these thoughts with his hopes for the future, “We have learned what it means to mobilize men with no distinction between class and mass, or discriminating selection of color or creed, into one unified mighty body for the prosecution of an undivided task…What are we going to do with what we have learned? There must be a physical demobilization, but are we going to permit also a social, moral and spiritual demobilization, as well? The answer given will determine the future not only of this generation, but many others to come.”

Many had high hopes following the Armistice that a new order was being inaugurated; that having served together on the battlefield, men of vastly differing backgrounds, religions, colors and nationalities could strive to put behind the old prejudices and fears so that a bright new world could be built. Sadly, the gains of multi-nationalism, multi-culturalism and equality on the battlefield could not translate into a new beginning, neither here in the United States nor in Europe. A mere twenty years later, dictatorship, militarism, oppression of the weak, blatant hatred for “the other” would again envelope the world and millions would be engaged anew in the fight to overcome the notion that “might makes right”. The lofty hopes of 1919 are yet to be realized, even a century later. It may be well to bear Bishop Murray’s words in mind, “The world-wide newborn spirit of common unity, interest, inspiration, service and sacrifice must never be allowed to die, but must be nursed and nourished to riper maturity…The only possible justification for war is that it is being prosecuted to procure and perpetuate a righteous peace.” 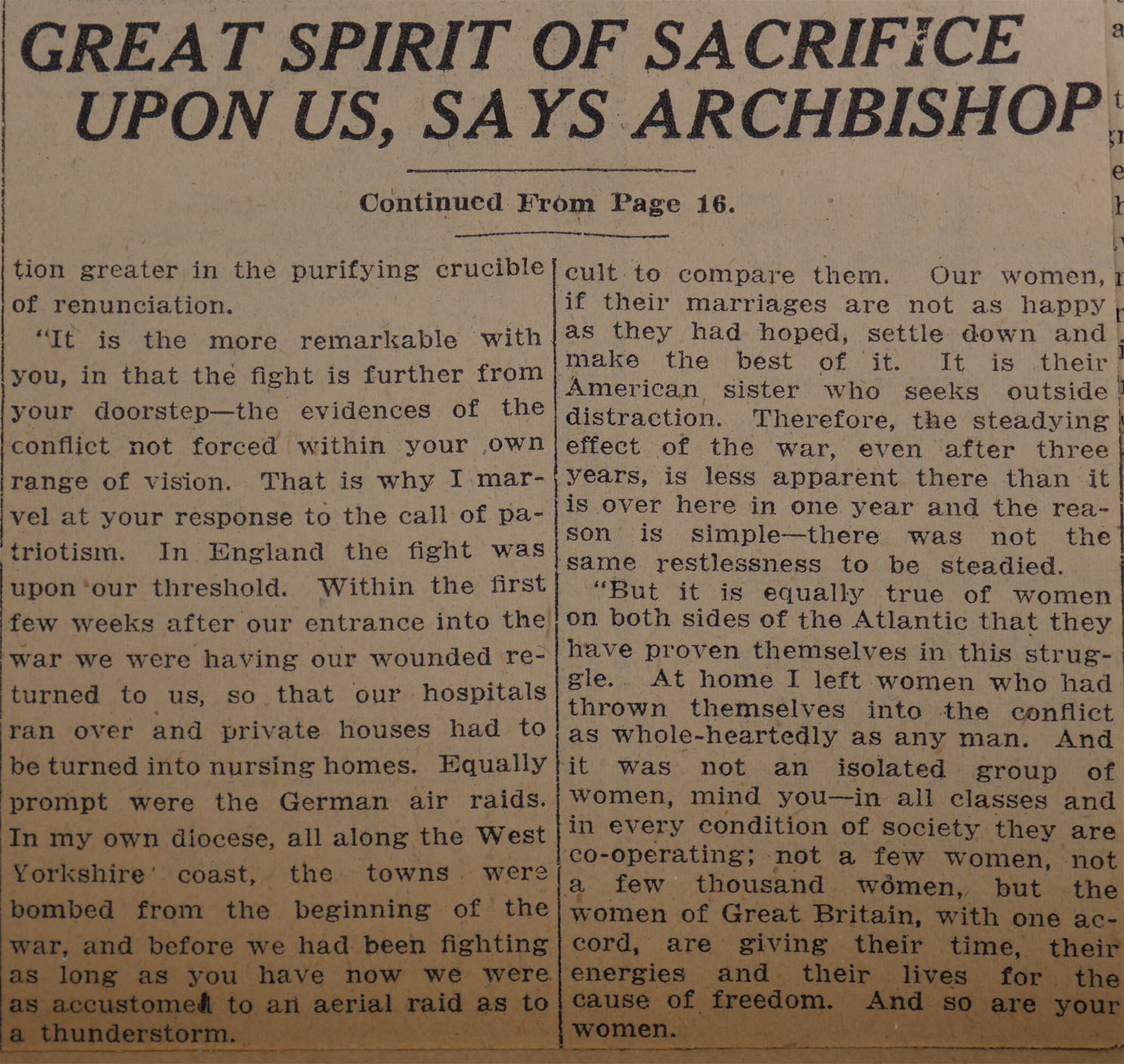 Almost every day in 1917 and 1918, Bishop Murray had some commitment related to the war effort, or the flu epidemic.

August 28, 1917: spent the day at Camp Meade; made several calls on sick persons

September 27, 1917: made address to men at Westminster upon eve of their departure for Camp Meade

October 12-14, 1917: three days at Camp McClellan, Anniston, Alabama; “We must keep in touch with our boys and keep them in touch with us”

October 23, 1917: dedicated Red Cross building in Brunswick and made address

November 9, 1917: presided at the meeting of our diocesan Laymen’s War Committee

December 13, 1917: participated in dedication exercises of the gymnasium building at the Marine Barracks, Quantico, VA.

December 12, 1917: held conference with the Bishop of Pennsylvania regarding Church work at Camp Meade.

February 7, 1918: granted permission to two diocesan clergy to go to the Front as chaplains; presided at a joint meeting of the Officers of the Diocesan War Commissions of Pennsylvania, Washington and Maryland.

November 10, 1918: held Memorial service for eleven soldiers who had died of influenza at Camp Meade.