From the Archives: Bishop James Kemp 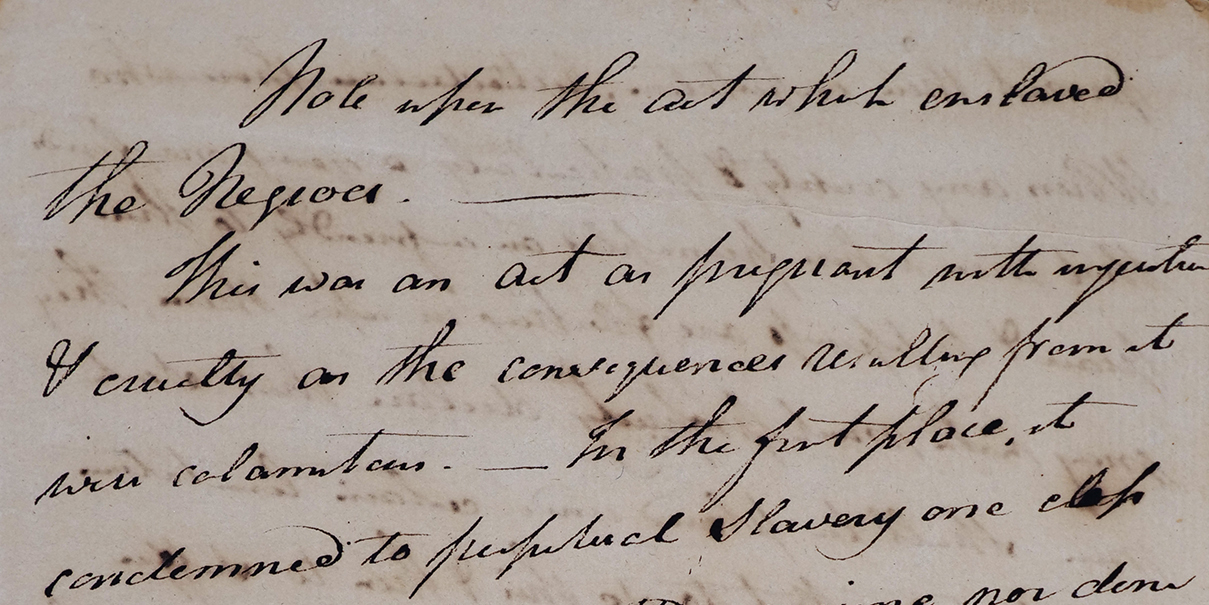 Note of James Kemp on Slavery
Undated, but before his death in 1827

In the Diocese of Maryland’s ongoing effort to grapple with our past and begin to bring about reconciliation and healing, we are mining our archives for information about African Americans who had a relationship with the Episcopal Church in Maryland. One path we are taking is a search of our confirmation records. Early in our history, it was common practice to list African American confirmands in a separate column headed “colored,” so tracking early confirmations and the parishes they attended is fairly simple. It is common to find baptisms, marriages and burials of both enslaved persons and free people of color listed in many parish registers, but becoming a confirmed communicant took membership to a new level. Remember, to be able to receive communion, confirmation was a prerequisite, so seeing the names of confirmed African Americans raises questions. Did these persons receive communion from the common chalice along with the white members? Or, as was the practice in some parishes, did all the African American members receive communion following the white members? Research continues.

James Kemp, of Aberdeenshire, Scotland, was born in 1764, the youngest son of Donald and Isabel Kemp. After being educated at Marischal College in Aberdeen, he emigrated to Maryland’s Eastern Shore in 1787, and took a job as private tutor in Dorchester County. Although he had been raised a Presbyterian, Kemp studied under the rector of Great Choptank Parish, the Rev. John Bowie, for the ministry in the Episcopal Church, and was ordained by Bishop William White of Pennsylvania – as deacon on December 26, 1789, and to the priesthood the following day. Kemp succeeded Bowie as rector of Great Choptank Parish in 1790 and remained until he was elected rector of St. Paul’s Parish in Baltimore in 1813. Amid great controversy, Kemp was elected Bishop Claggett’s Suffragan bishop in 1814, and became Diocesan Bishop after Claggett’s death in 1816.

Bishop Kemp’s official acts, including confirmations, are recorded in a small notebook, written in his own hand. It is interesting to note which parishes presented African Americans for confirmation, and where they were located around the diocese, which then included the Eastern Shore and the parishes which now make up the Diocese of Washington.

On December 20, 1818, Bishop Kemp confirmed thirty-one people, including “Rachel Allen, a coloured woman” at St. Paul’s Parish in Baltimore. On November 16, 1819, he visited St. Mark’s in Frederick County, consecrated the church and confirmed seventeen persons, including an interesting entry naming Ruth Wheately and Sarah Tice (written in brackets) with the name “Rev. W. Westerman” attached. Does that indicate the two women were enslaved by Westerman? William Westerman was rector of St. Mark’s from 1819 to 1821, when he returned to the West Indies, his place of birth. On June 10, 1822, the bishop confirmed thirty-seven people at Christ Church, Georgetown, including “a stranger” and 18 “coloured people,” all listed with first names and surnames, perhaps an indication that they were all free persons of color, and not enslaved. At All Saints’ in Frederick, on June 19, 1823, the bishop confirmed seventeen people and “13 colored” persons – sadly, all unnamed. Again, on April 29, 1824, he omitted the names of the “8 blacks” among the confirmands at Accokeek Church in Prince George’s County. At St. Paul’s Church in Prince George’s County, Kemp confirmed fourteen white persons and “coloured persons: Horatia Bowman, Beatty Weems, Isaac Thomas and Ally Hawkins.” At Christ Church, Georgetown, on February 15, 1825, he confirmed eight people, including “Patty Allen & Susan Williams, coloured persons.”

Analyzing the location of the churches which prepared and presented African Americans for confirmation may prove insightful. There were 65 parishes in the Diocese of Maryland in 1821, and the bishop reported that he had confirmed 336 people the previous year. In the eight years of entries in his “Official Acts” notebook (1817-1825), he listed 48 persons of color as having received the rite of Confirmation, coming from just six different parishes. Christ Church in Georgetown, District of Columbia, presented the most African Americans for confirmation: 20. The rector during this time was the Rev. Charles Petit McIlvaine, who became bishop of Ohio in 1832. He had come to Washington from New Jersey in 1820 and served as chaplain to the U.S. Senate three times. Two other parishes in the Washington area, Accokeek Church, and St. Paul’s Parish, both in Prince George’s County, listed African American confirmands, as well. Accokeek was part of St. John’s Parish, whose rector was the Rev. Ethan Allen, the first diocesan historiographer, who was brought up in Massachusetts. The Rev. Levin Gillis served as rector of St. Paul’s Parish in Prince George’s County, and was a native of Somerset County, on the Eastern Shore.

All Saints’, Frederick, in addition to preparing 13 persons for confirmation during this time, also reported in 1821, that the ladies in the parish had started a “school for coloured people” in the parish, which boasted about 100 students. The Rev. John Johns, a native of Delaware, was the rector, and he would go on to become Bishop of Virginia in 1842. The only person of color confirmed in Baltimore, came from St. Paul’s Parish, where Bishop Kemp himself was rector. 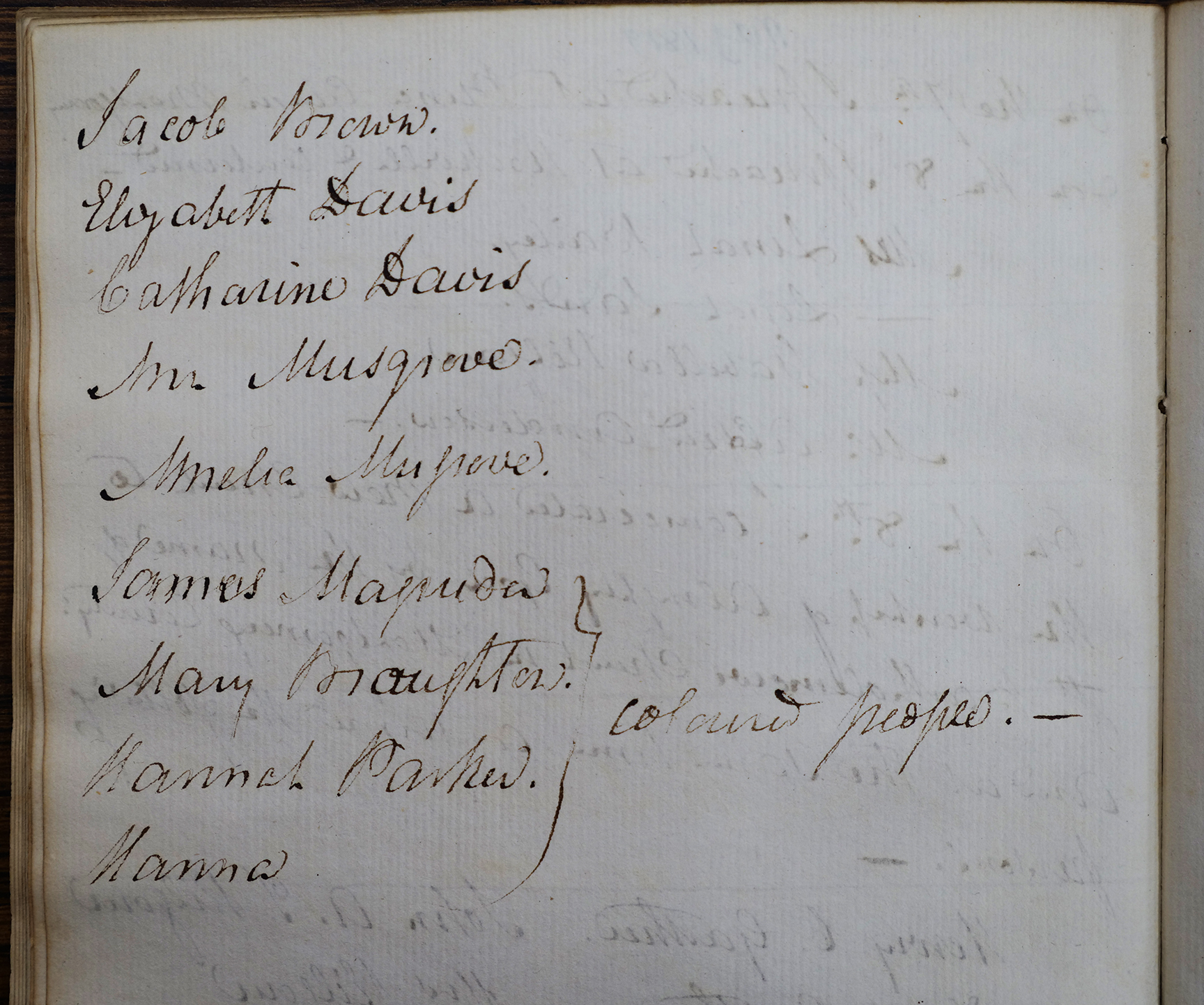 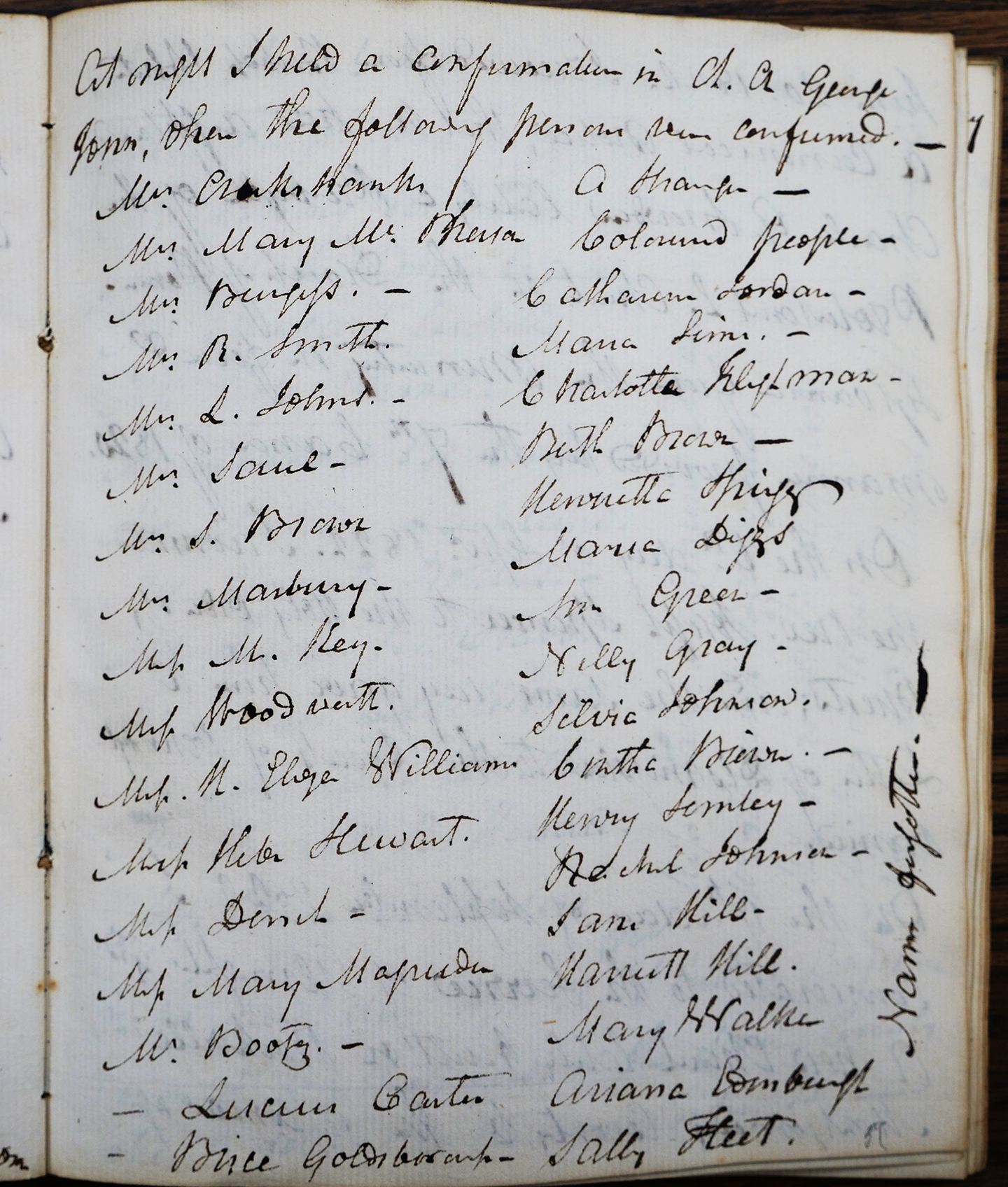 There were no confirmands presented from the Eastern Shore, none from Southern Maryland, and none from far western Maryland. According to United States Census data, throughout the slave era, the two counties which claimed the largest number of enslaved persons of African descent were in Prince George’s and Anne Arundel. No church in Anne Arundel County presented African Americans for confirmation during Bishop Kemp’s episcopate, although the 1820 census showed that there were over 10,000 enslaved and 3,374 free persons of color living in the county with a total population of 27,165. Prince George’s County churches presented the most African Americans for confirmation during the Kemp era, 32, but the 1820 census shows that the county was home to over 11,000 enslaved and over 1,000 free blacks, among a total population of 20,216. Clearly, African American communicants in the Episcopal Church in Maryland during the early nineteenth century comprised a very tiny minority. How does that fact play out in our diocese today? 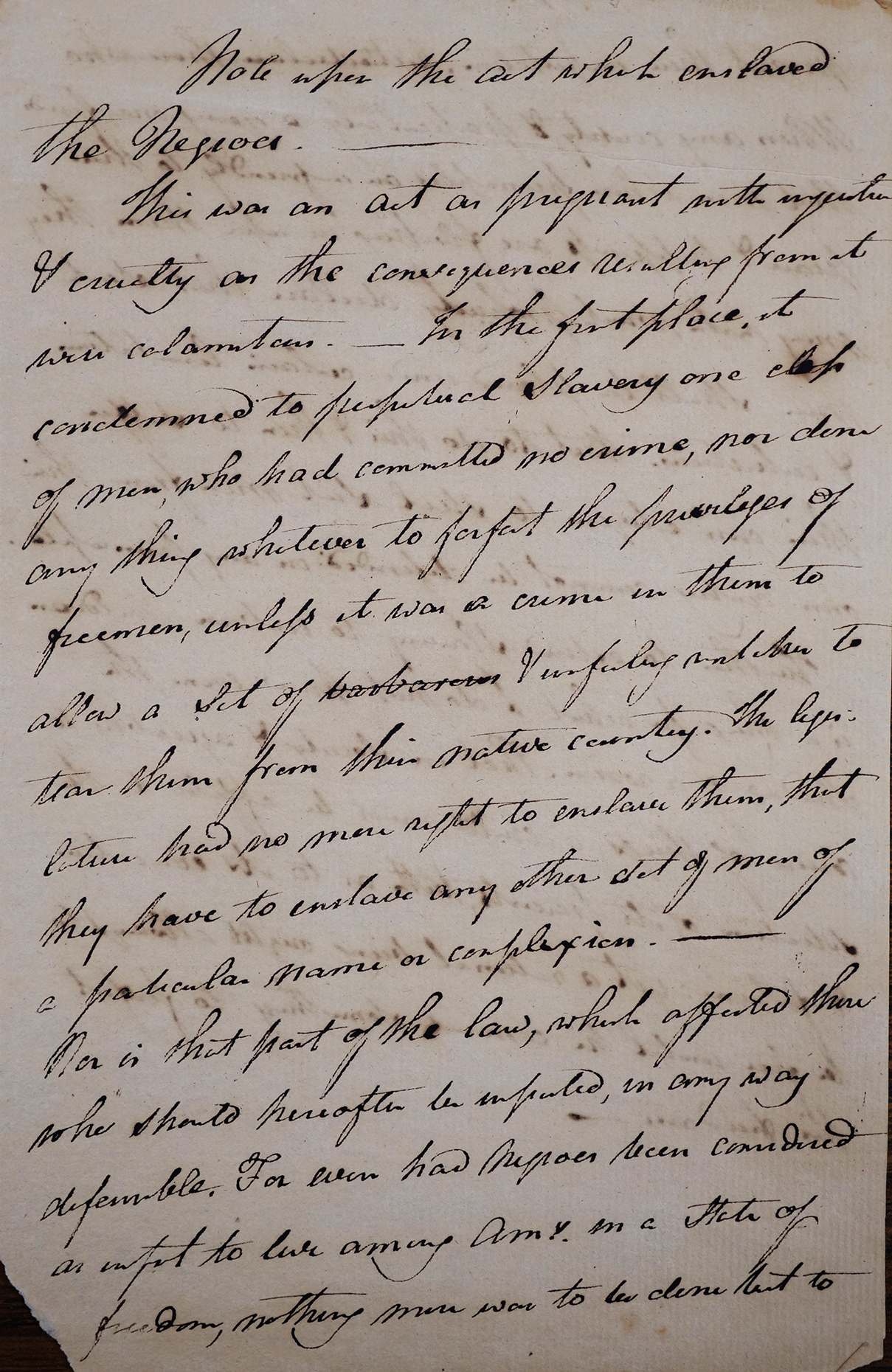 Notes of Bishop James Kemp on Slavery
Undated, but before his death in 1827

“Note upon the Act which enslaved the Negroes:”

“This was an act as pregnant with injustice and cruelty as the consequences resulting from it was calamitous. In the first place, it condemned to perpetual slavery one class of men who had committed no crime, nor done anything whatever to forfeit the privileges of freemen, unless it was a crime in them to allow a set of barbarians and… sent there to tear them from their native country. The Legislature had no more right to enslave them than they have to enslave any other set of men of a particular name or complexion. Nor is that part of the law, which affected them so should thereafter be imparted in any way defendable. For even had Negroes been conducted or imported to live among Americans and in a state of freedom, nothing more was to be done but to prevent this importation. When any country, and particularly a young one, finds that men whose principles are unfriendly to their peace and happiness are flooding in upon them, they may with much propriety declare that such men shall be placed under certain limitations and restrictions. But to do this and then to suffer their own citizens to steal said men from their own country cannot be defended an any principle. Further to extend slavery to unborn children is a thing for which I do not know even the shadow of reason. That in society and arguable … to …of things, a child must be affected by the …lection of its parents, both as to its education and fortune: yet a rational being ought always to be free until he commits something to forfeit his freedom.”