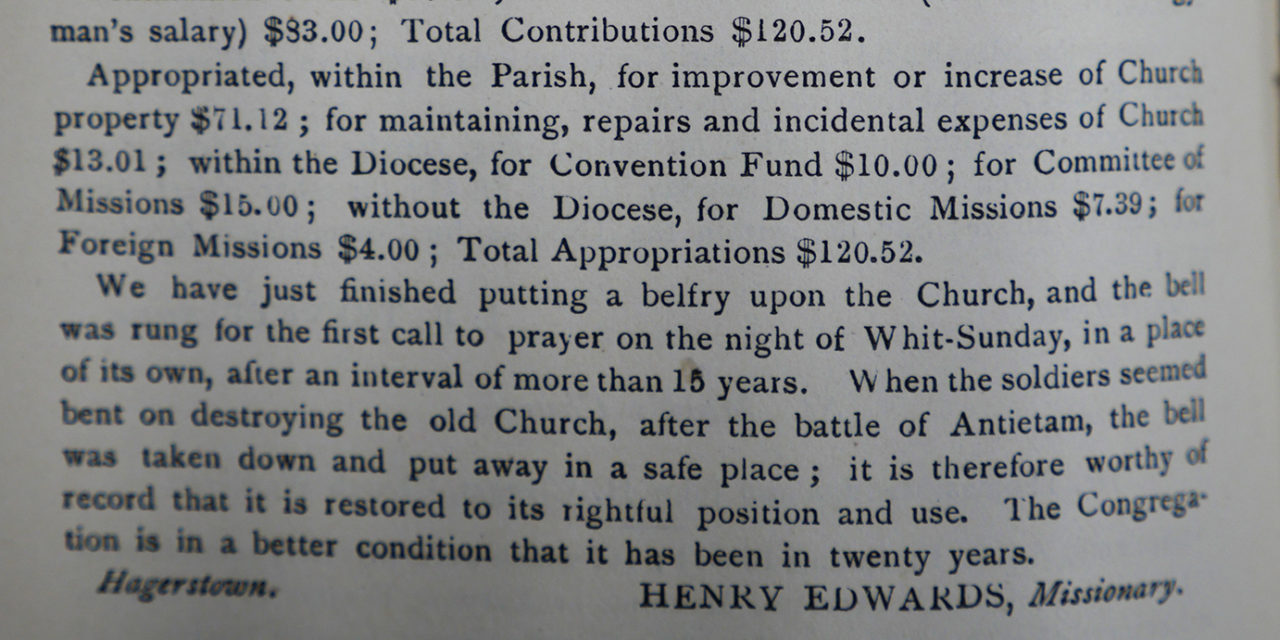 The Civil War Battle of Antietam began at dawn on Wednesday, September 17, 1862, in the small western Maryland town of Sharpsburg, between Confederate forces led by Robert E. Lee and the Union Army of the Potomac under the command of George McClellan. The battle raged all that day and into the next, and when it was finally quiet, 22,717 men were dead, wounded or missing, making it the bloodiest day in United States military history.

The little Episcopal church in Sharpsburg had as its rector the Rev. John Alexander Adams, who had been ordained by the Bishop of Virginia, William Meade in 1829, and immediately came to Sharpsburg. He stayed until 1834, when he went as a missionary to Kentucky. He came back into the diocese in 1844, describing himself to Bishop Whittingham as “a worn out Western pioneer,” but still of some use. Returning to Sharpsburg, he remained in the area, until his death on August 26, 1875.

The church building of St. Paul’s, Sharpsburg, having been consecrated in 1831, was already in pretty sad condition when the battle took place in 1862. In 1857, Mr. Adams had written to Bishop Whittingham about the agricultural depression in the area, and that needed repairs to the church had been deferred. In his annual report in 1860, the rector described the structure this way: “Last autumn the ceiling of our old church gave way and fell through the floor, only half an hour before time for the morning service… Our church becoming thus untenable, the German Reformed congregation very kindly rendered the use of their house, which was used until the following Easter. The rector is sorry to add that our desolate church building was visited in the spirit of vandalism by the lawless and vile; and the pulpit, desk, carpets, cushions and books and every thing, even down to the pews and windows made a common wreck. However, we have the gracious promise, ‘The Lord will return and rebuild Zion, and we will wait patiently, prayerfully and hopefully, until this tyranny be over past, and his anger be removed from us.’” 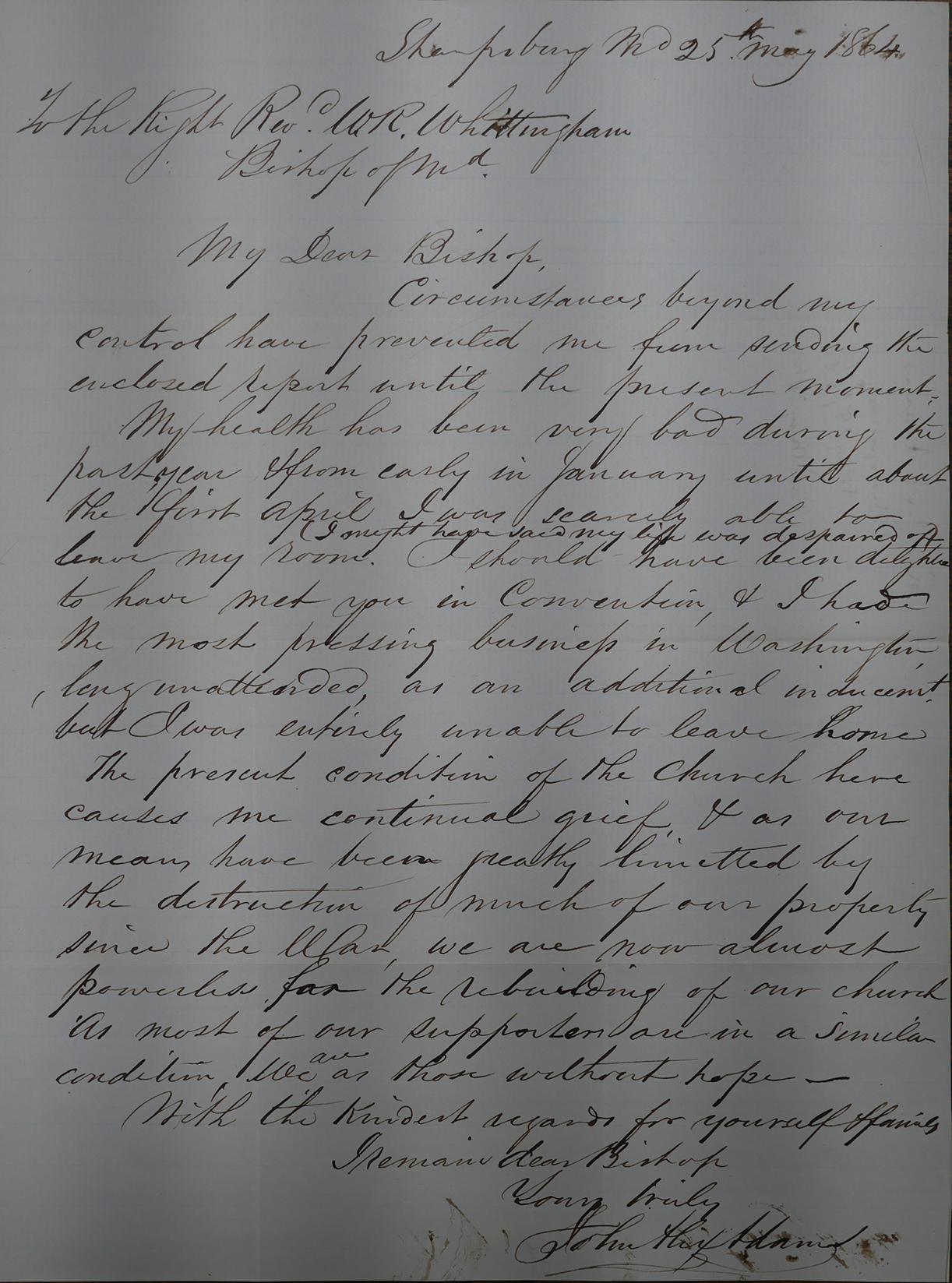 Letter from the Rev. John Alexander Adams to Bishop Whittingham, 1864

During the battle of Antietam, St. Paul’s Church was used as a hospital for wounded and ill soldiers, and, adding to its already dilapidated condition, cannon fire further weakened the building. Eight months after the battle, Mr. Adams wrote the bishop: “My heath has been so feeble during the winter and spring, Mrs. Adams too, since the Battle of Antietam has not recovered from the severe shock, and remains exceedingly delicate and nervous. Everything around us in the public road is unenclosed and desolate. All characters are daily and nightly passing, and it would not be safe, even if my health would permit, to leave home. You cannot, my dear bishop, realize the severe suffering of losses we have had in this part of our border state… We are without a church building or place of worship in Sharpsburg. We have few opportunities of meeting together for services in public, but these I have, so far as possible, embraced. At our home we have Sabbath services when not engaged elsewhere.”

In his parochial report of the same year, St. Paul’s rector wrote, “Our members, having generally suffered great losses in the Battle of Antietam, without remuneration as yet, have neither the means nor the heart for rebuilding until confidence and peace are restored to our suffering country. We are thus completely destitute of a place of worship, No Sabbath bell invites us to the House of God, and no prayer ascends from thence for the blessings on a dying world.”

1864 brought scant improvement to Adams’ and Sharpsburg’s citizen’s situation. The parochial report reflects “no improvement in the condition of my charge.” In a letter to the bishop written on May 25, 1864, Mr. Adams reported, “The present condition of the church here causes me continual grief & as our means have been greatly limited by the destruction of much of our property since the War, we are now almost powerless for the rebuilding of our church. As most of our supporters are in a similar condition, we are as those without hope.” The report for 1865 was no more encouraging. “This congregation, which five years ago was in a very encouraging condition, is now sadly changed. Their church building is in ruins, and they are without even a room to worship in. Their losses during the war have been very considerable, and until Government can do something to relieve them, there can be little hope of restoration.” Mr. Adams himself suffered from declining health, and ended his report by saying, “The rector mourns over our present desolation and trusts that some younger hand may soon be found to lay hold of the work and be instrumental, by God’s help, in reviving again our beloved Zion.”

The parochial report published in the 1867 Journal of Convention showed a glimmer of hope for the little congregation at St. Paul’s, Sharpsburg. “The Rector regrets that the Church building belonging to this congregation remains still in the same useless and ruined condition it was left in, after having been used as an hospital and for other purposes by our army during the war. …Yet we have an abundant evidence of an increasing interest in the services of our Church, and a manifest desire for the speedy rebuilding of our house of prayer…Notwithstanding the great difficulties under which we have labored, there has been an increase in our members. The resignation of the Rector has been some time in the hands of the Vestry, and though esteeming highly of the tie which has so long bound us together in very kind associations, he nevertheless feels that a younger and more healthful and active minister would be better adapted to their present want.” 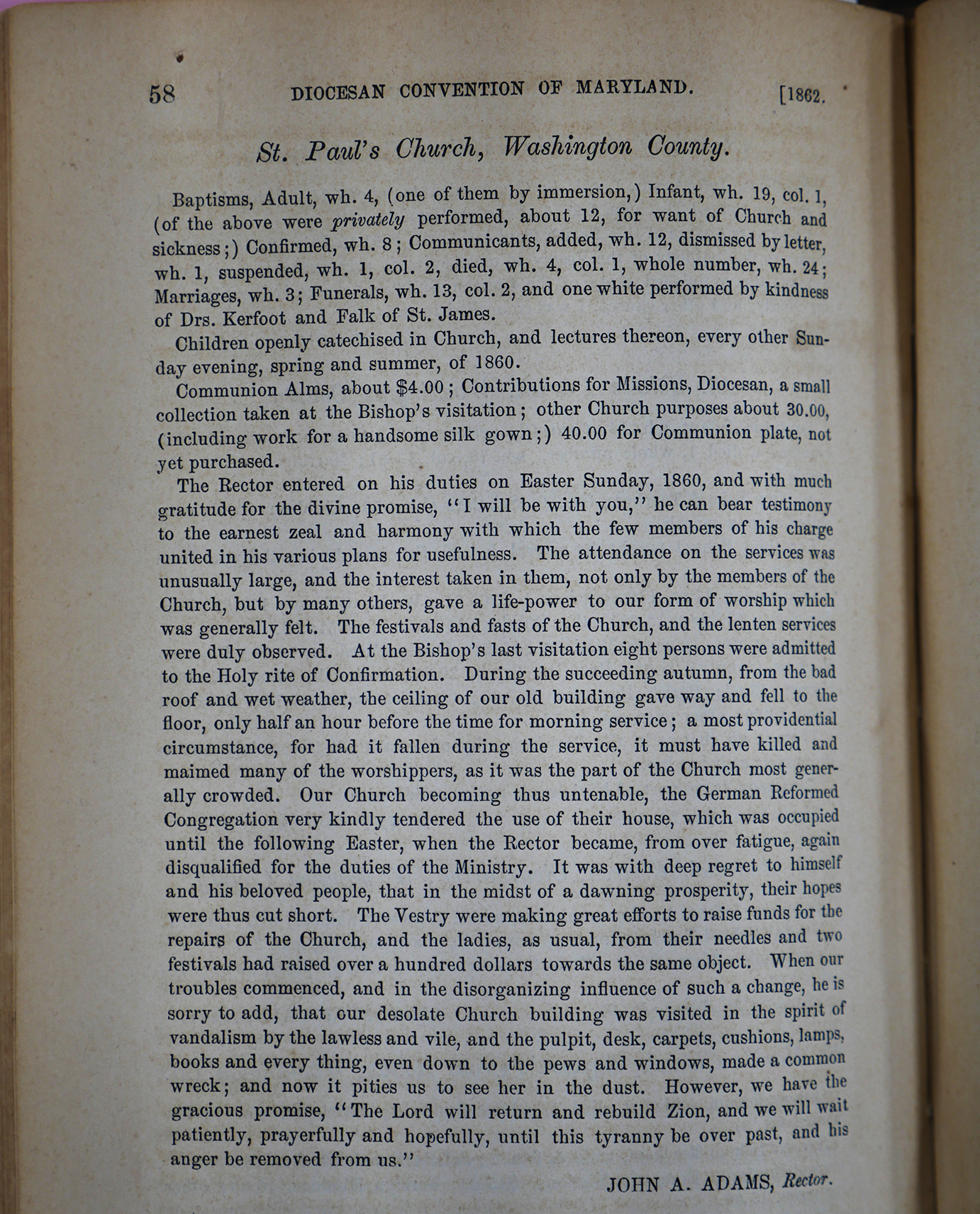 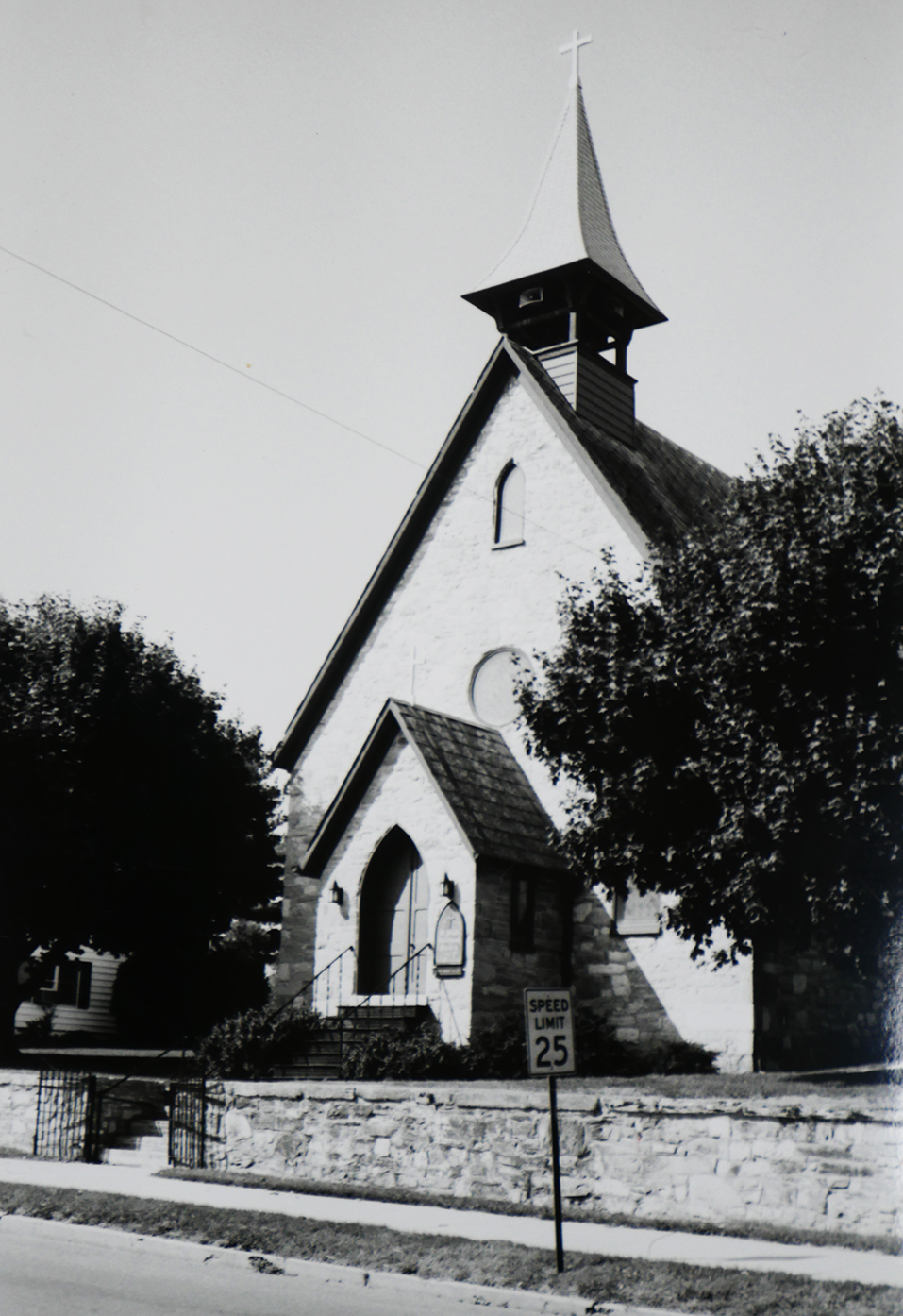 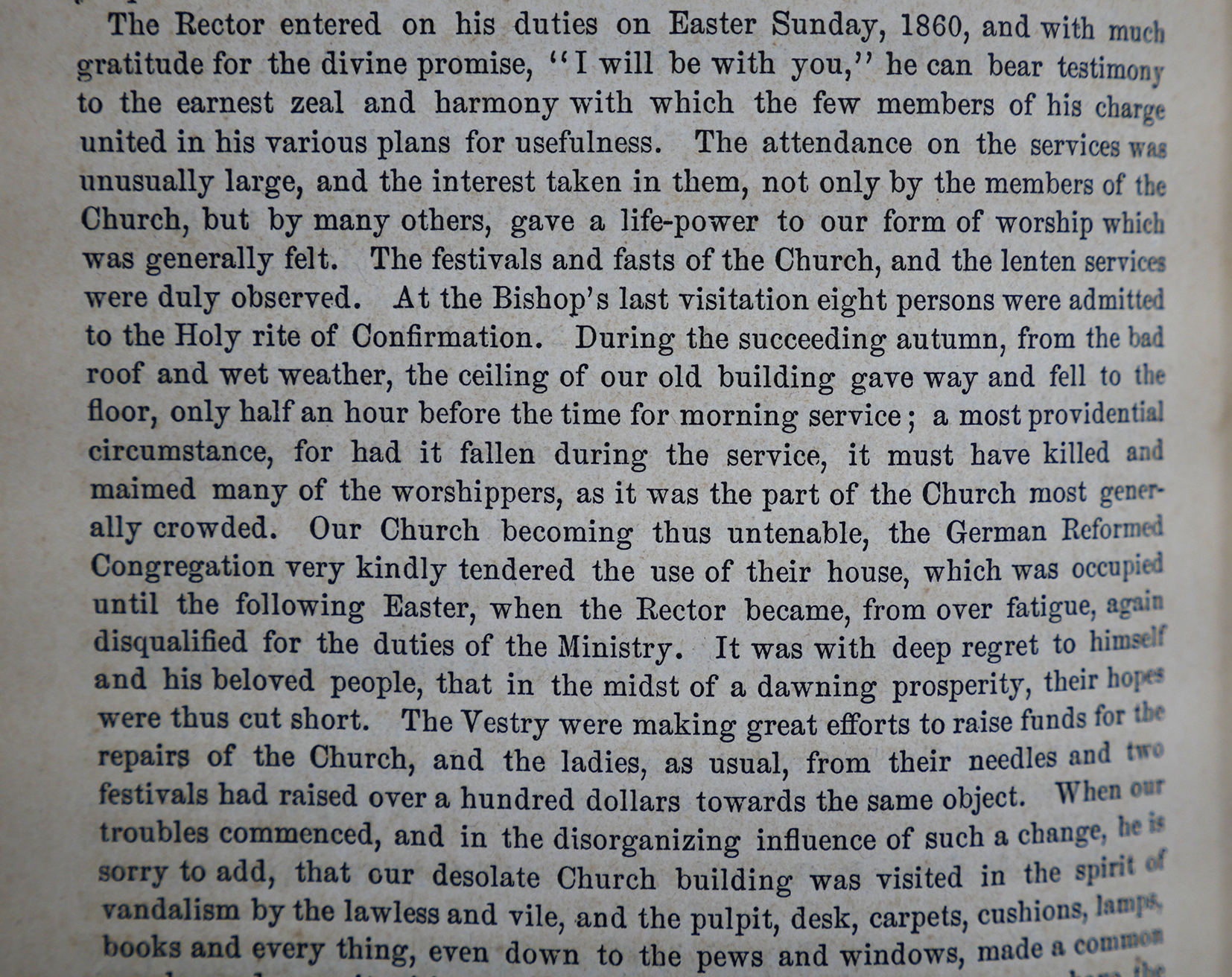 At the age of 48, in September of 1868, the Rev. Henry Edwards became missionary at large for the whole of Washington County, having charge of St. Mark’, Lappans, St. Andrew’s, Clearspring, St. Luke’s, Pleasant Valley and St. Paul’s, Sharpsburg. In his first parochial report for St. Paul’s of 1869, he wrote, “It is hoped that the congregation may be moved to undertake either the repairing of the old church or the building of a new one.” In 1870, “several hundred dollars” were subscribed to rebuild the church, and work began that summer. However, when work did begin, it was determined that the walls of the old church were unsafe, and the vestry decided to build an entirely new church, using some of the brick of the old building. The cornerstone was laid on November 2, 1871, and by the following May, the walls were built and ready for a roof. However, because they were determined not to incur any debt, once the roof was added, building was discontinued until more money could be raised. The 1873 parochial report noted, “The Church is still unfinished. It is, however, under cover, and we have money enough to lay a floor, and put glass in the windows, and some special offerings for chancel furniture have been received. When the floor is laid and the windows glazed, we intend to use the building.” In May of 1875, Mr. Edwards reported, “During the year we have been able to finish the ceiling of the Church and to plaster the side walls; also to carpet the chancel and put in a frame for a chancel window; and in doing these things have been aided generously by friends outside of the parish and mostly outside the diocese.” But 1876 proved disappointing. “For several months our services were held in the houses of the people. On the 26th of April, when Bp. Pinkney made his visitation, we were able to use the church, though it is still unplastered, and we hope we shall be able to finish it before the end of the year.”

Henry Edwards was delighted to be able to convey a message of hope in his 1877 parochial report. “We have just finished putting a belfry upon the church, and the bell was rung for the first call to prayer on the night of Whitsunday, in a place of its own, after and interval of more than 15 years. When the soldiers seemed bent on destroying the old church, after the battle of Antietam, the bell was taken down and put away in a safe place; it is therefore worthy of record that it is restored to its rightful position in use. The congregation is in a better condition than it has been in twenty years.”

For fifteen years, the people of St. Paul’s, Sharpsburg, suffered economic depression, destruction of property, the literal collapse of their church building, sporadic worship in borrowed spaces, and feelings of loss; yet they sustained the hope that “the Lord will rebuild Zion.” Although they had no building in which to worship, they continued being the Church by gathering, praying and supporting each other. As Mr. Adams said in 1867, “Notwithstanding the great difficulties under which we have labored, there has been an increase in numbers.” And ten years later, Mr. Edwards was happy to report that “the congregation is in a better condition than it has been in twenty years.” This true story of being the Church is one of hope in the midst of devastation, and the unstoppable spirit of the People of God. Let us take some hope for ourselves from this account and recommit ourselves to stay calm, stay connected, stay Church. 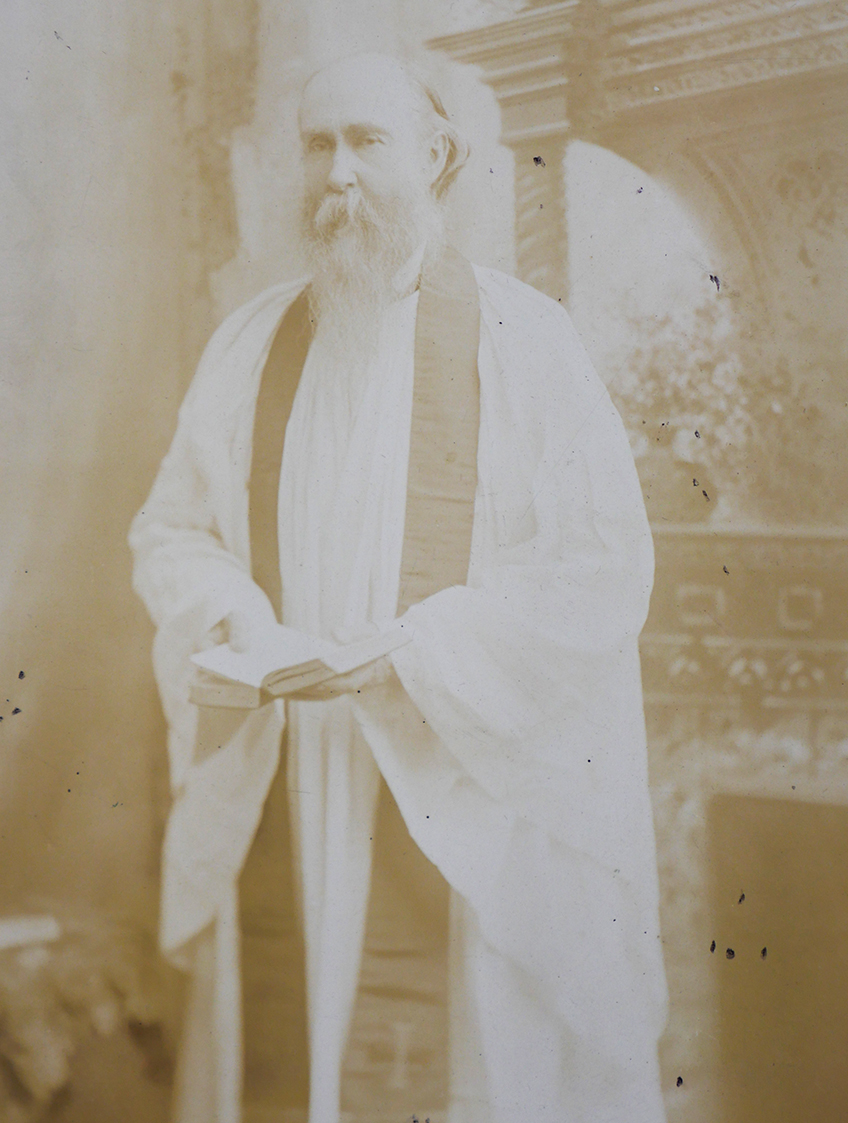