From the Archives: ‘Episcopal Despotism’ and Bishop Whittingham’s Questionnaire of 1844 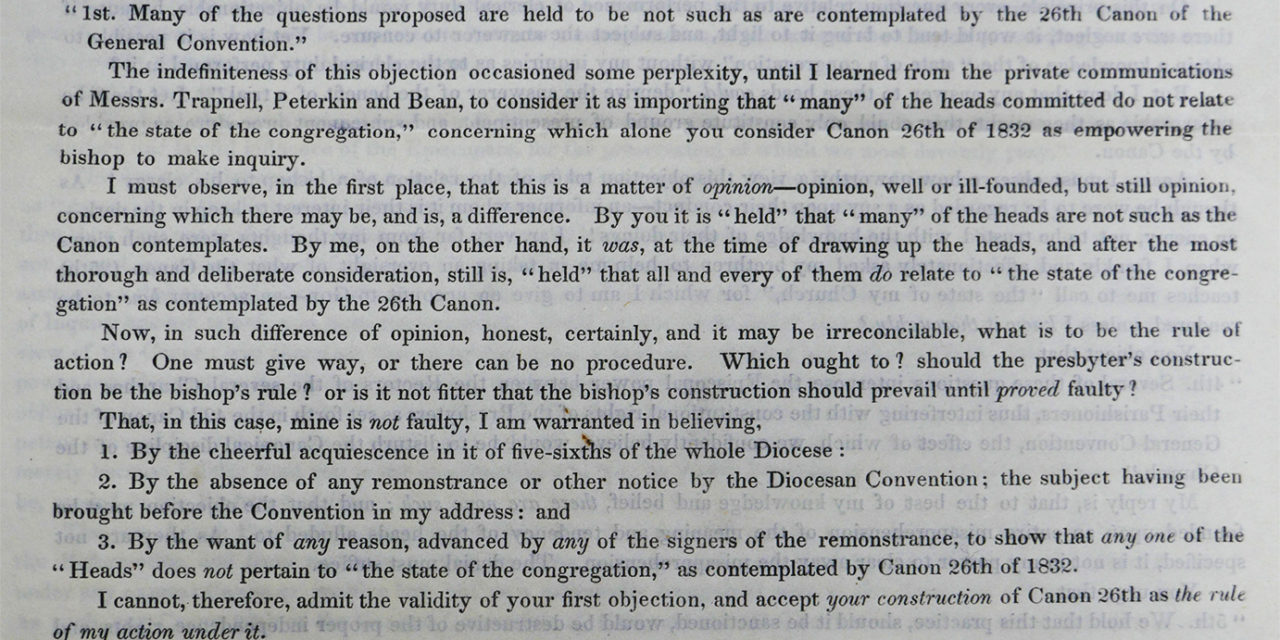 Bishop Whittingham’s response to the protests of his Questionnaire

Being a leader in any walk of life brings with it controversy as well as responsibility. There are always detractors and backers, no matter what stance is taken. It is no different in the church, nor has it ever been. Whatever the burning issue of the day, the theological answer to any question espoused by a bishop is assured to bring out supporters and critics. Whether it is Prayer Book revision, the ordination of women, inclusive language, or reparations for slavery, thorny questions and emotional answers go hand in hand. For the nineteenth and most of the twentieth centuries, the church wrestled with the theology on both sides of the High Church/ Low Church controversy.

Shortly after taking up the position of Bishop of Maryland in 1840, the new prelate sent a questionnaire to all the parishes in the diocese. William R. Whittingham was a New Yorker by birth and residence and had not spent much time in Maryland before his election, and he was looking for a way to gather as much information as he could as he got to know his diocese.

Whittingham’s predecessor Bishop William Murray Stone had died on February 26, 1838, leaving the diocese without a bishop. When Diocesan Convention met in May of that year, the important agenda item was the election of a bishop for the diocese. The two men nominated were the Rev. John Johns and the Rev. William Wyatt. Seen as a battle between High Churchmen and Low Churchmen, this controversy between theological stances would resonate throughout the episcopacy of Whittingham and many of his successors.

The Rev. John Johns, rector of Christ Church, Baltimore, (and later Bishop of Virginia) was the leader of the Low Church party in the diocese, espousing evangelical ideals of personal piety and salvation, emphasizing preaching, and often questioning what was seen as “authoritarianism” by certain clergy or bishops. The Rev. William Wyatt, rector of St. Paul’s Parish, Baltimore, was perceived as leader of the High Church party. The term “High Church” first appeared in the late seventeenth century in England, defining those opposed to the Puritan wing of the Anglican Church. In America, following the Revolution, the term generally pointed to those who strictly adhered to the doctrine, discipline and worship of the Episcopal Church, stressing the spiritual presence of Jesus in the Eucharist. (Influenced by the Oxford Movement, later definitions of “High Church” included advanced ritual practices, but in 1840, the term did not have those connotations to such an extent.)

After eight ballots during the 1838 Convention, the votes were virtually tied, members of the High Church and Low Church parties digging in their heels. A committee of four clergy and four laymen was formed to “confer together in the spirit of Christian conciliation” and come up with a candidate who would “preserve the harmony of the church.”  At the May, 1839, Convention, the committee reported that it had not been able to “unite with entire unanimity” on a candidate for bishop, but the majority had put into nomination the Rev. Benjamin Dorr, rector of Christ Church, Philadelphia, and the Rev. Francis Hawks, rector of St. Thomas’ Church, New York City. The Convention elected Dr. Dorr on the first ballot. John Johns and William Wyatt were appointed to write Dr. Dorr and inform him of his election. Apparently the committee had not contacted Dr. Dorr for permission to put his name into nomination, because upon receipt of the letter from Johns and Wyatt, he wrote back to say, “ I can see no reason for accepting the appointment”, and decided to stay at Christ Church, where he remained until his death in 1869. 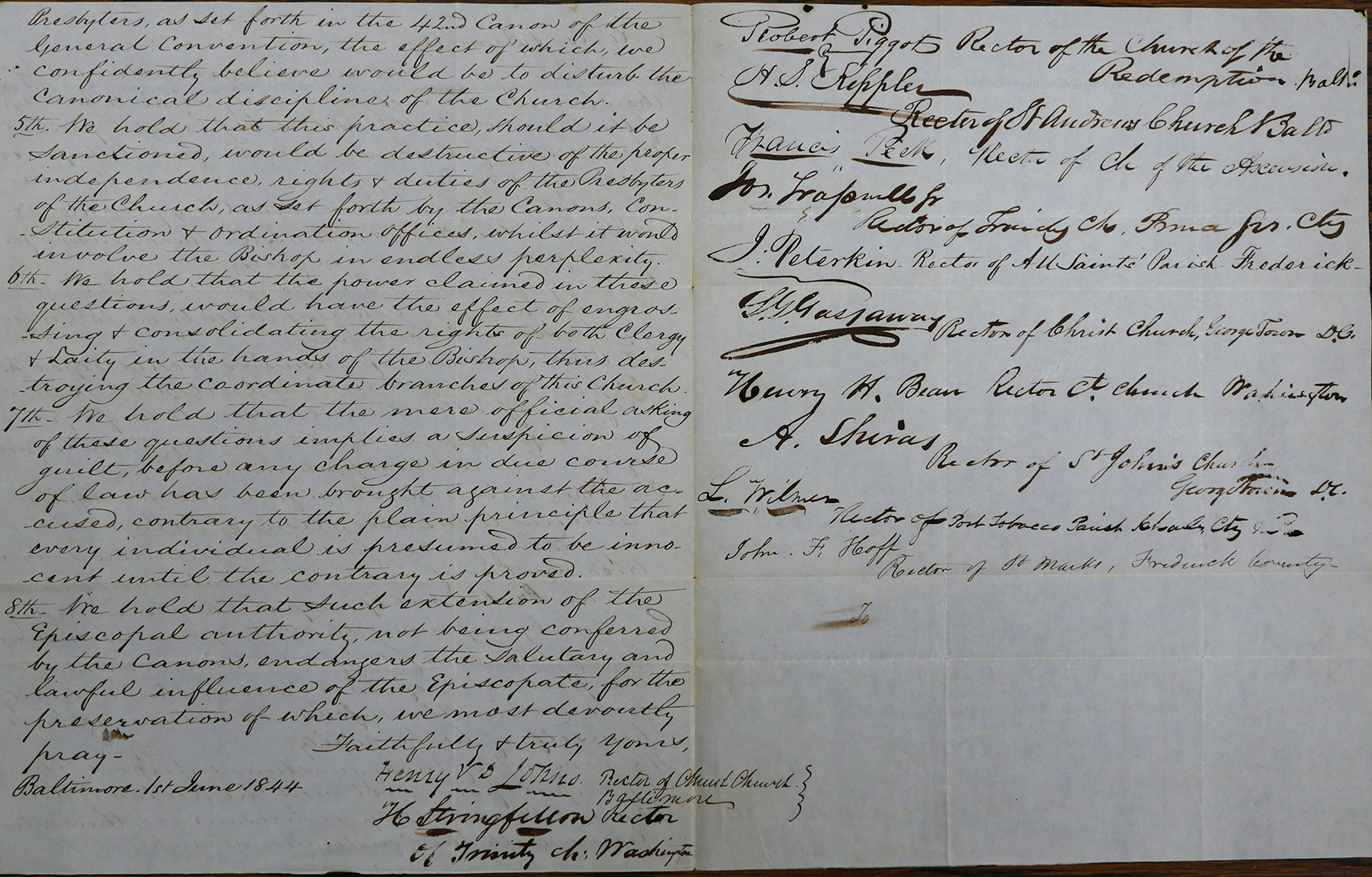 A Special Convention was called in November of 1839 for the purpose of again trying to elect a bishop. William Whittingham was nominated, as was The Rev. Henry Van dyke Johns, the brother of John Johns, and rector of St. Andrew’s Church, Baltimore. After eighteen ballots and no election, the Special Convention adjourned. Again in 1840, after almost three years without a bishop, the nominating committee after “a free and friendly interchange of opinions” nominated Whittingham again. Henry V.D. Johns was nominated from the floor, as was The Rev. J.P.K. Henshaw, rector of St. Peter’s, Baltimore. Finally, on May 28, 1840, the 34-year-old Whittingham was elected. He was consecrated on September 17, 1840, the 48th. Anniversary of the consecration of Maryland’s first bishop, Thomas J. Claggett.

In an effort to acquaint himself with his new diocese, Whittingham immediately asked each rector to send him a list of parishioners, a list of heads of households, and the names of those desiring confirmation. By Diocesan Convention in May of 1842, he reported that “nearly all” of the parishes had responded. But in February of 1844, he sent out an extensive list of questions to be answered by not only each rector, but each vestry and churchwarden. In his address to Convention, he cited the 26th Canon of General Convention which gave a bishop power to make himself thoroughly acquainted with the “state and circumstances of every part” of the diocese.  In Series One of the questions, which he termed “Heads of Inquiry”, the seventeen questions, some with several parts, directed to the rector included “How many families belong to the parish?”, and “Have there been any special religious services for the benefit of the servants?” Series Two was for the rector, churchwardens and vestry with twenty-three questions to be answered. “Is there a public rumor affecting the character of any minister of this church within the Parish?” was question 9, and number 15 asked, “In the performance of public worship are any other prayers used than those prescribed by the Book of Common Prayer?” Series Three was directed to the churchwardens and vestry, inquiring about the physical metes and bounds of the parish, a description of the church building, and #12: “What accommodation is there for servants and free colored people?”. Three questions asked about the clergyman’s salary, how it was raised and how it was paid.

Not surprisingly, as early as June of 1844, clergy were writing to Bishop Whittingham protesting the questionnaire. Twelve of the most outspoken clergy refused to answer the questions, saying Whittingham’s inquiries “were not contemplated” by Canon 26, and officially protested. Whittingham drew up a printed response to these objections, maintaining that these priest’s interpretation of Canon 26 was merely one opinion, and that 5/6 of the of the diocese had already answered in “cheerful acquiescence”. Most insulting to the bishop was their claim that answering some of the questions would “expose the individual to civil suit”. Whittingham replied that “this objection implies a quite unworthy suspicion that answers might not be treated by the Bishop as privileged communications”. The protesting clergy went on to say, “We hold that the power claimed in these questions would have the effect of engrossing and consolidating the rights of both clergy and laity in the hands of the bishop, this destroying the co-ordinate branches of this church.”, and that “the asking of these questions implies a suspicion of guilt”, ending with “such extension of Episcopal authority endangers the salutary and lawful influence of the Episcopate.” The methodical bishop answered each question logically in turn and called upon historical precedent, saying, “The use of such inquiries is as old in the Church of England as the Reformation”, citing and reproducing Bishop Claggett’s own questionnaire, which closely parallels Whittingham’s. 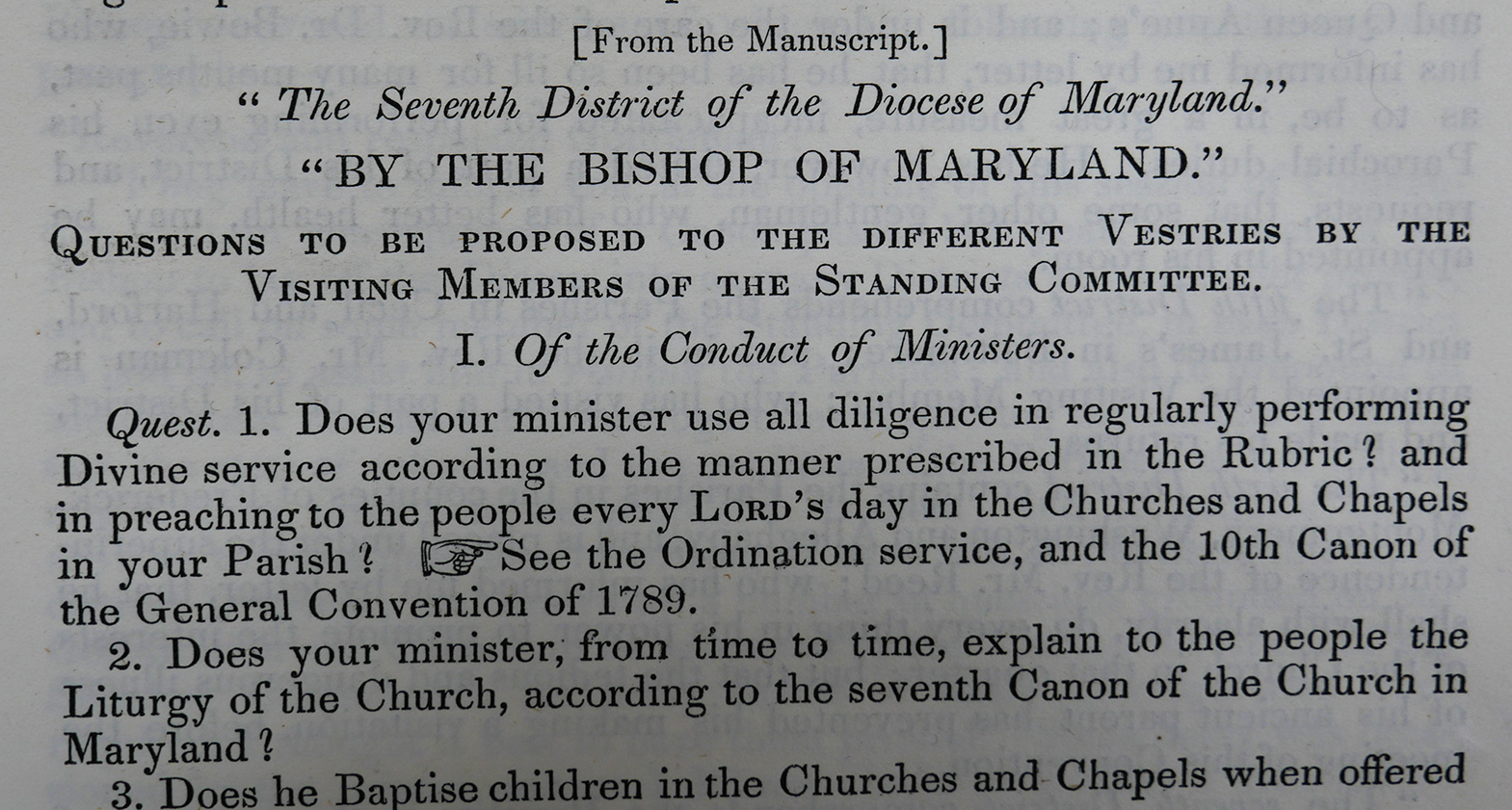 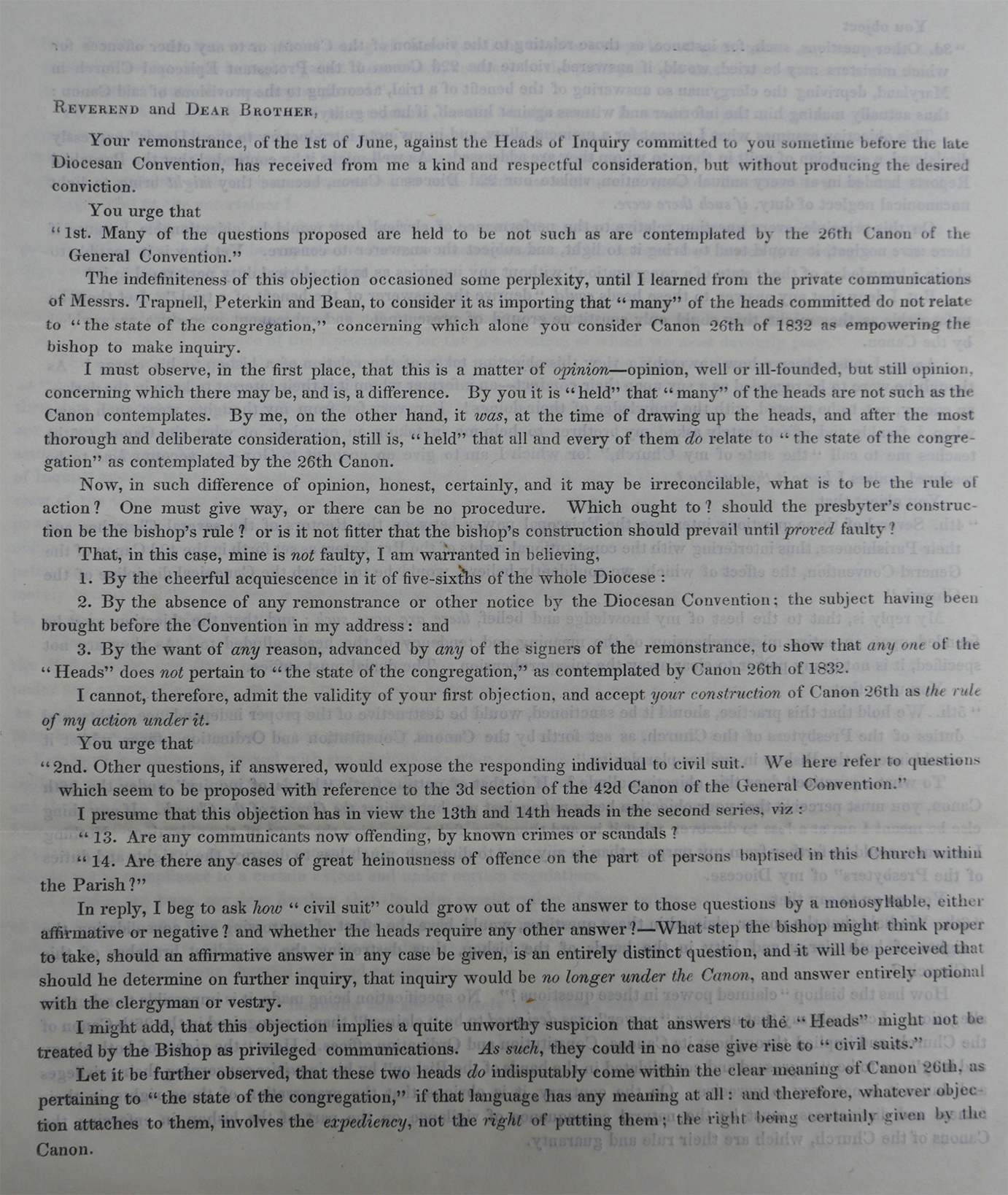 Bishop Whittingham’s response to the protests of his Questionnaire 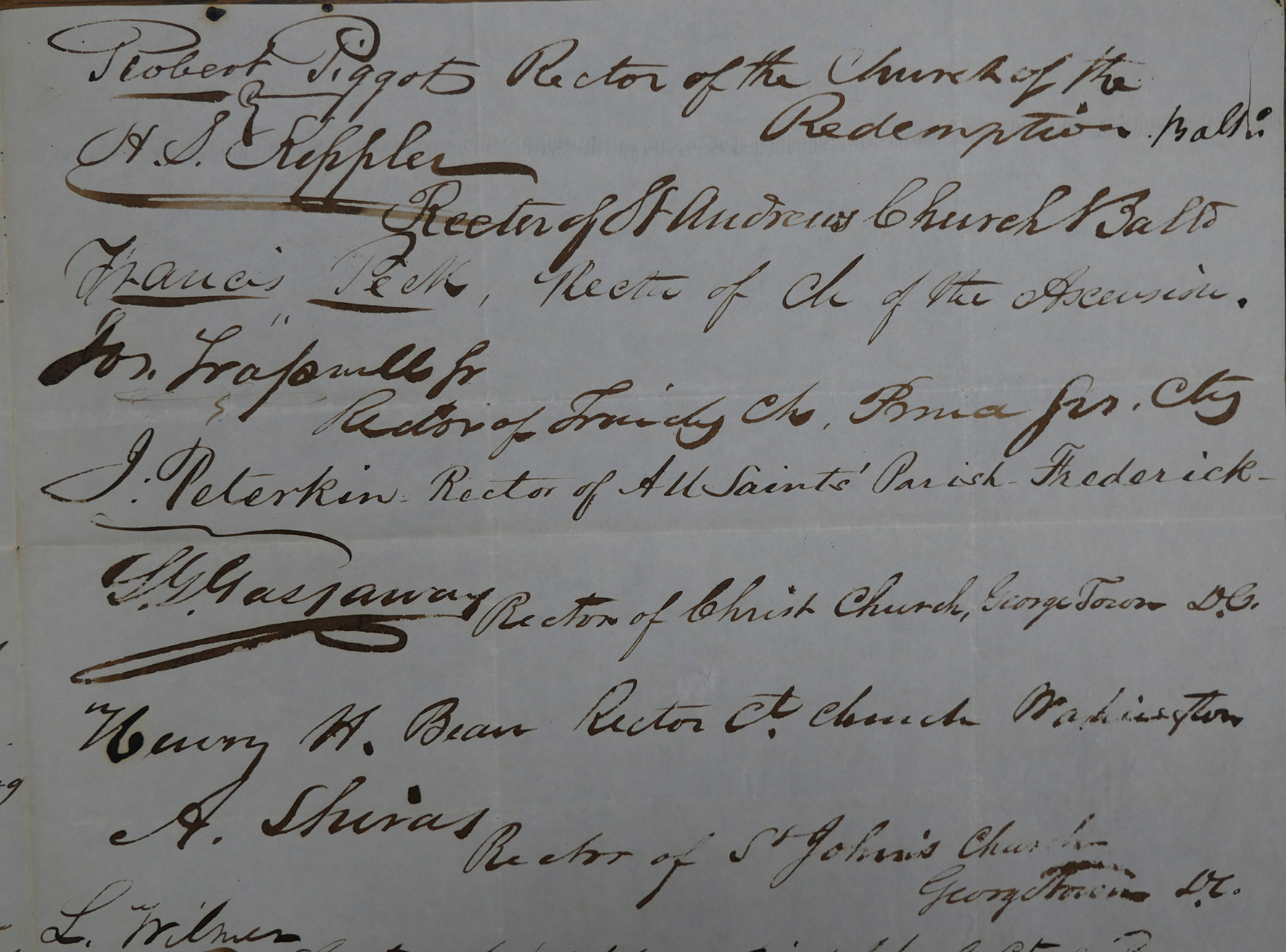 Signatures of the clergymen who protested Bishop Whittingham’s Questionnaire

This early controversy of Whittingham’s episcopacy reflected the persistent High Church/Low Church clashes of theology and polity. As early as 1843, Henry van Dyke Johns, the rector of Christ Church, Baltimore, was publishing pamphlets attacking Whittingham’s “Oxford Movement” views of the priesthood, the sacraments and the episcopacy itself. His was the first signature on the protest letter. He later, in 1848, called Whittingham “divisive and subversive”. In 1850, he penned a pamphlet entitled, “An Appeal to the Laity of Maryland against the Divine Right of Episcopal Despotism”. That year he refused to allow the bishop into his parish to administer communion, and the parish refused to give the usual Deed of Donation to the diocese at the consecration of the church building.

Another signer of the protest was the Rev. John Francis Hoff, who wrote a pamphlet entitled “The Christian Ministry Not a Priesthood”, and was in constant strife with Whittingham, going so far as to be among those who brought presentments to the Standing Committee against the bishop in 1873 claiming he had broken the canons by allowing Mt. Calvary Church in Baltimore to engage in such Oxford Movement practices as having candles on the altar, wearing colored vestments and carrying a processional cross.

Despite the criticism, Bishop Whittingham collated all the answers he received from sixty parishes and dutifully recorded them in a notebook. This wonderful glance at the 1844 Diocese of Maryland, her clergy, her church buildings, her worship practices, her financial status, and the names of her members is an amazing resource for twenty-first-century researchers. In the next issue, we will explore some of the answers and try to figure out what they mean for us today. 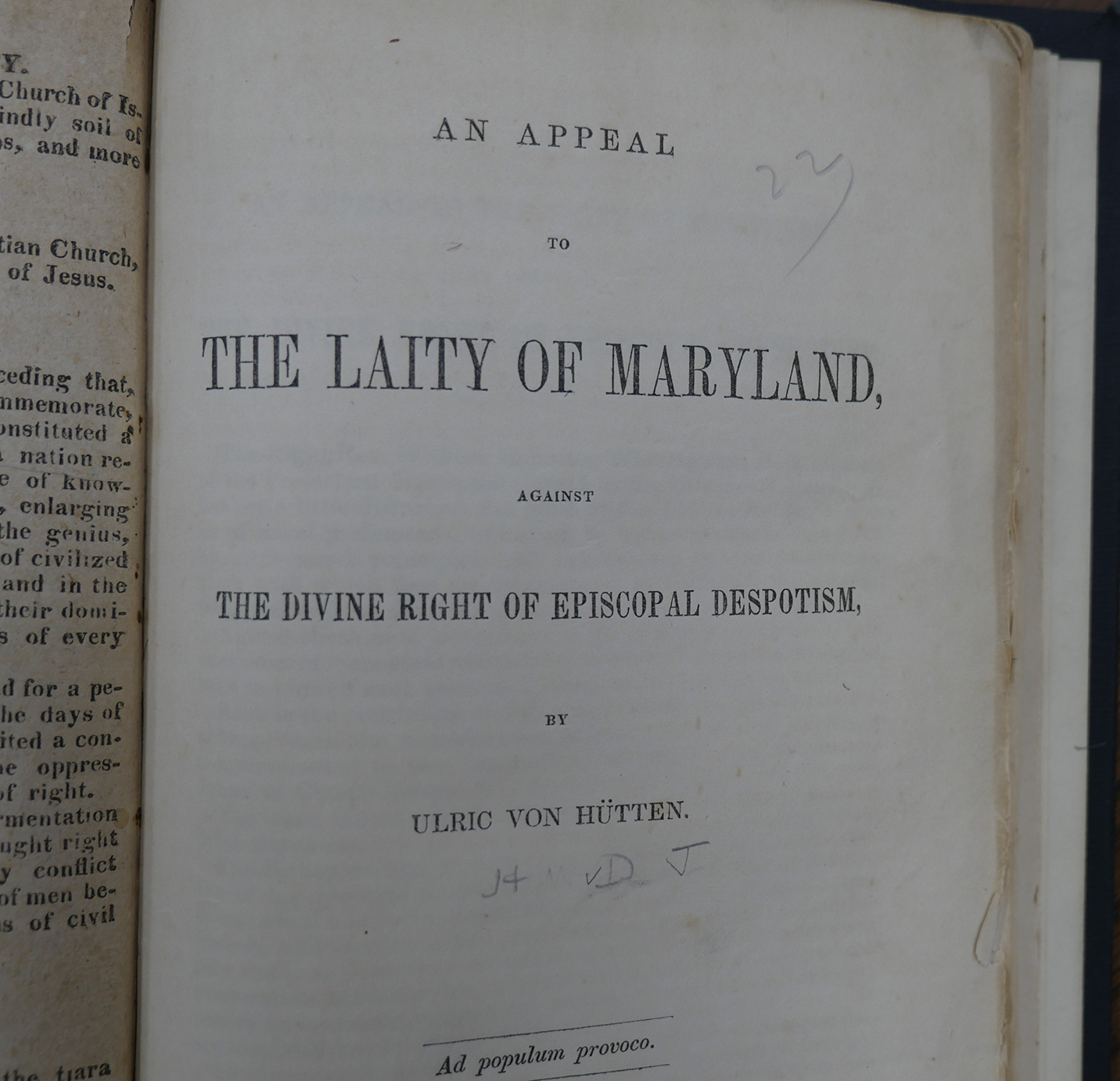 “Episcopal Despotism”, pamphlet written by a clergyman using a pseudonym, later discovered to be the Rev. Henry Van Dyke Johns