From the Archives: St. Philip’s Church, Cumberland, Part I 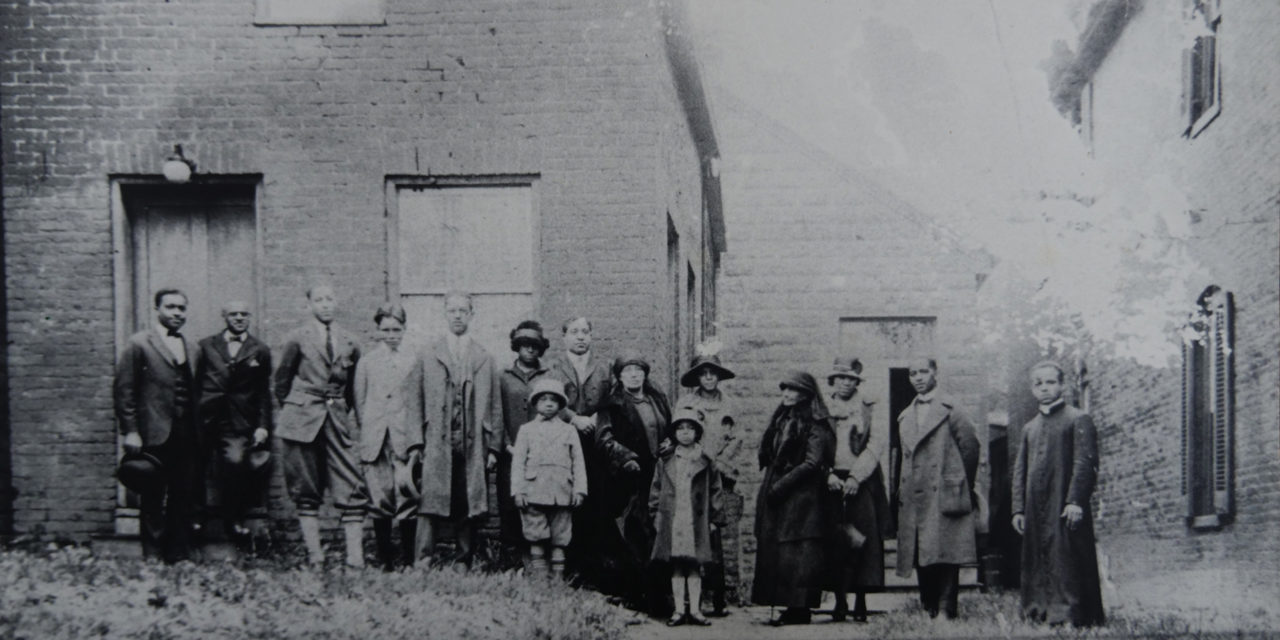 In his 1892 parochial report detailing the events of 1891, the Rev. Clarence Buel, rector of Emmanuel Church, Cumberland, and a native of New York, noted the opening of a mission in south Cumberland, called the Memorial House of the Holy Cross, built in memory of Estelle Taylor Perry by her three children. He also added, “In addition to this work, the Rector has undertaken special services with the Colored people of the Parish and is greatly encouraged by the interest which has been aroused. Indeed, there is every reason to believe that it will result in the erection of a Chapel for the special use of the Colored people.”  On November 15, 1891, the bishop, William Paret, confirmed 25 people at Emmanuel, seven of whom he listed as “colored”, obviously the nucleus of the fledgling congregation. They were Lewis Wagner, John A. Cornish, Benjamin Edward Ball, Maude Gates, Laura Wagner, Clara Jackson and Anna Ball. Clarence Buel, one of three Buel brothers to serve as rector of Emmanuel, personally attended to the new “colored” congregation. Emmanuel purchased the old Consolidated Coal Company building on the corner of Water Street and Baltimore Avenue to temporarily house the St. Philip’s congregation, and the first service was held on November 29, 1891.

For the next three years, Buel wrote in his parochial report, “This report embraces the work of the Memorial House of the Holy Cross, …and also the work of a separate Colored congregation known as St. Philip’s Chapel , which is under the personal charge of the Rector”. Buel resigned on June 1,1895, and in September Bishop Paret sent Aloysius R. Ridgeley, a newly enrolled postulant for Holy Orders, an African American and a member of St. Philip’s Chapel, Annapolis, to Cumberland to work at St. Philip’s.

Clarence Buel was succeeded by J. Arthur Evans as rector of Emmanuel, who only stayed a couple of years. In the 1898 Parochial Report, the new rector, Frederick B. Howden, wrote, “St. Philip’s Mission for colored people was temporarily abandoned” during the interim. Finally, in 1901, Emmanuel’s rector reported, “A house and lot has been bought for the use of the Colored congregation of St. Philip’s Mission. The cost of these purchases were $2,650.00”. The frame structure and lot were situated on South Smallwood Street, and remodeling took place to make the building suitable as a chapel. 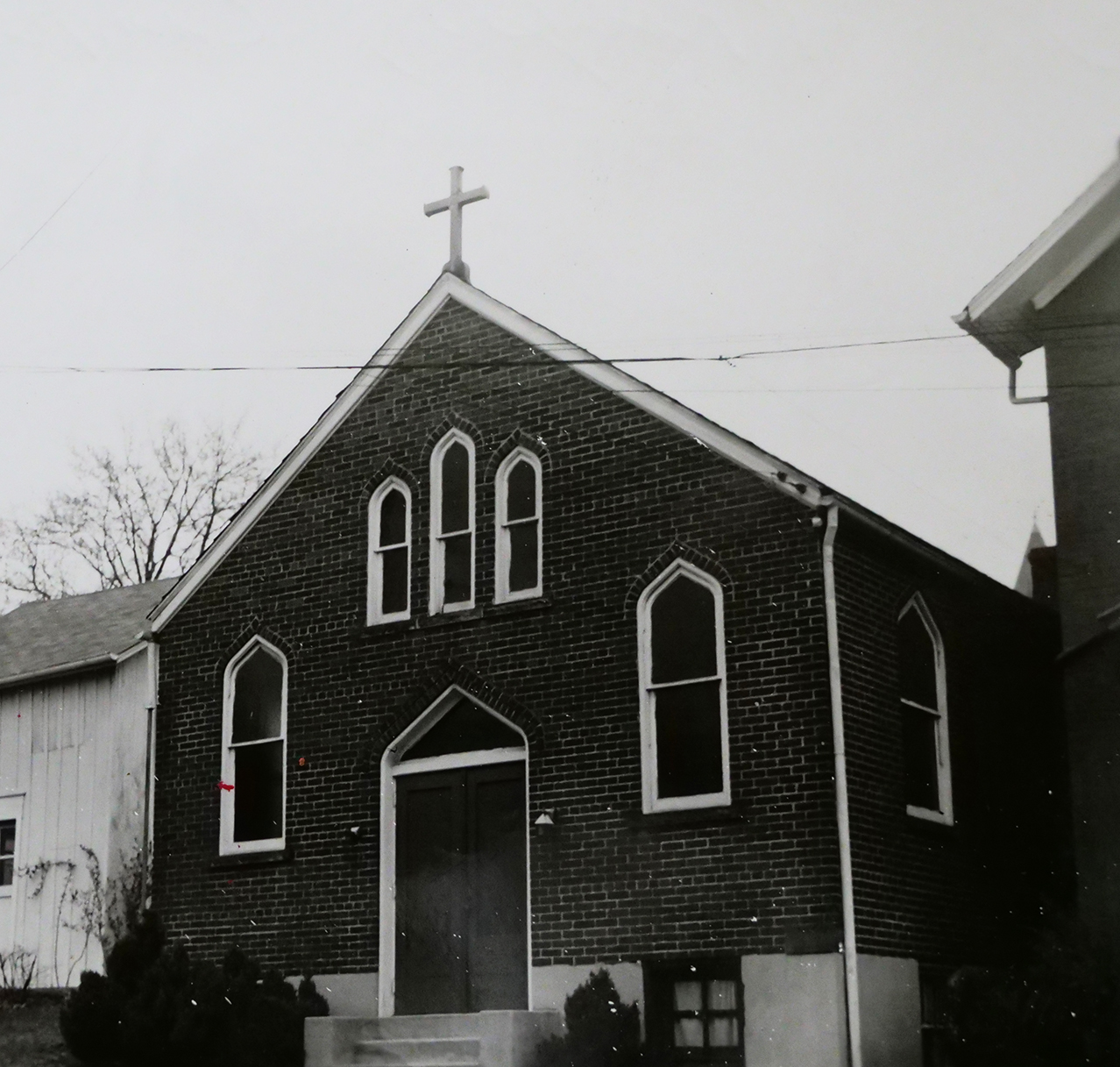 St. Philip’s congregation traced its roots to a man named Samuel Denson, who, as legend tells it, was a runaway slave from Vicksburg, Mississippi. Denson made it to Cumberland in 1850, and with the help of the rector of Emmanuel, David Hillhouse Buel, who acted as “stationmaster” for Emmanuel’s Underground Railroad stop, Mr. Denson was persuaded to stay in Cumberland and go to work as Emmanuel’s sexton. During the 1880’s, as Mr. Denson tended to the furnaces, rang the bell and pumped the organ, he was accompanied by his children and their friends, who eventually made up a Sunday School class, which led to the formation of the congregation of St. Philip’s.

The Rev. Cornelius Dawson, an African American, came to St. Philip’s in 1921 as deacon-in-charge, and was ordained to the priesthood, along with a white candidate Victor Ross at the pro-cathedral on June 3, 1922. Included at that service was the diaconal ordination of three white men and Gustave H. Caution, an African American, and the father of Tollie Caution, who would come to St. Philip’s in 1930 as priest. The 1923 parochial report for St. Philip’s showed 94 baptized persons in attendance along with 31 Sunday School children. Mr. Oscar Martin was clerk of the Advisory Board.

According to a history of the parish, when Mr. Dawson arrived, there was talk of adding a parish house to the chapel property, and he took it upon himself to organize the congregation to make it happen. He “purchased some two by fours and a large supply of crate wood, and with the help of the men of the Congregation, constructed a temporary house behind the church.” The priest in charge put out a call in the April, 1923, Maryland Churchman asking for donations from “good-meaning Church people” to add to the $1,000 already raised by St. Philip’s so a permanent building could be erected. He added, “The organizations which solicit your aid are a sewing guild for small girls, a boy choir, a girls’ choir, and two clubs for smaller boys. There are also several basketball clubs.” The no-frills building would cost $3,800, and at their April 20, 1923, meeting the Executive Council approved a grant of $2,800 for St. Philip’s parish house. The fourth Sunday in Advent, 1923, was the opening day for the parish hall, which measured 45’ X 24’, and contained an auditorium with a stage, two toilets, a kitchenette, two dressing rooms and a hot air furnace in the cellar. With additional costs, the final accounting came to a little over $5,000, and the congregation agreed to raise the remaining $1,100. 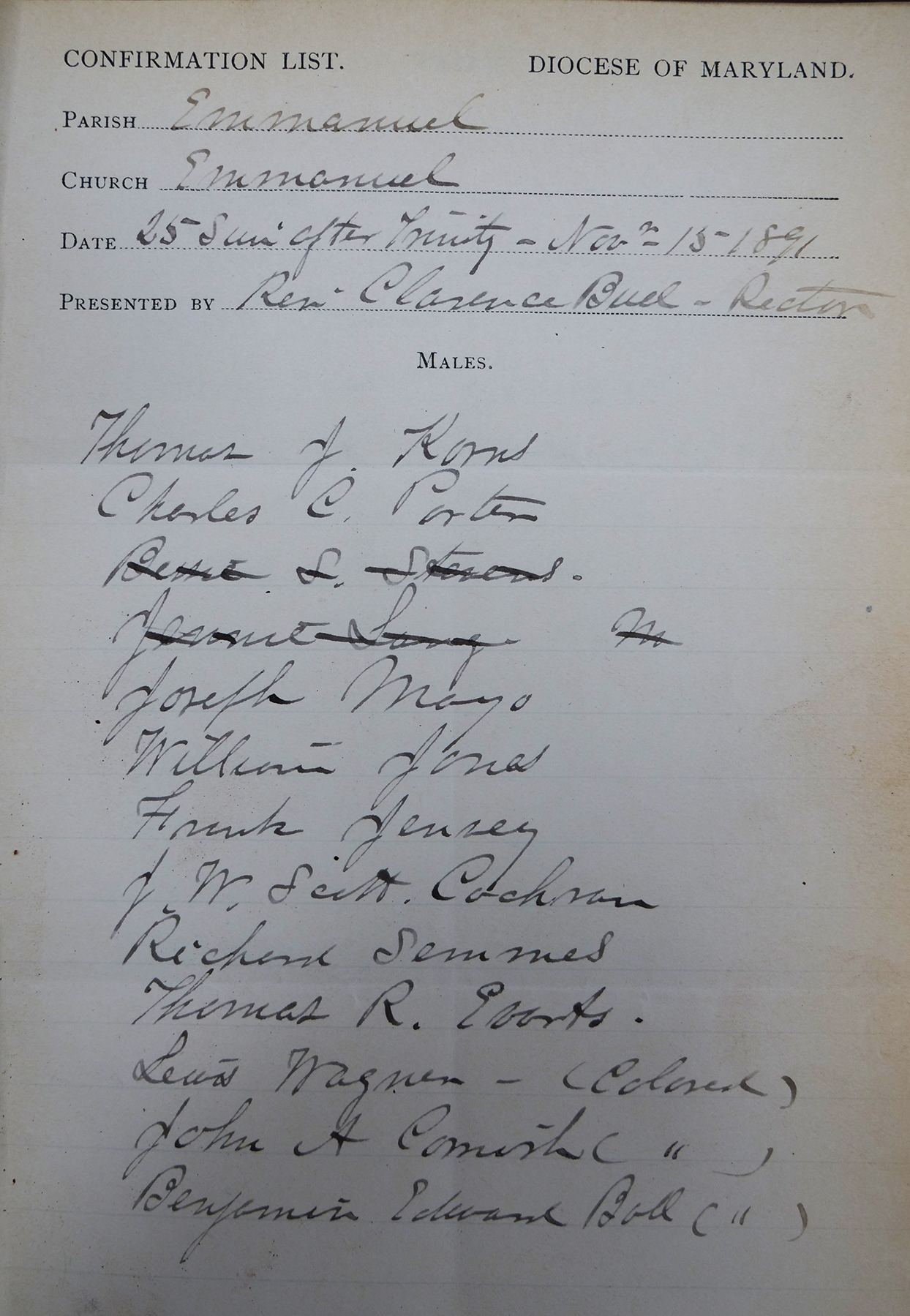 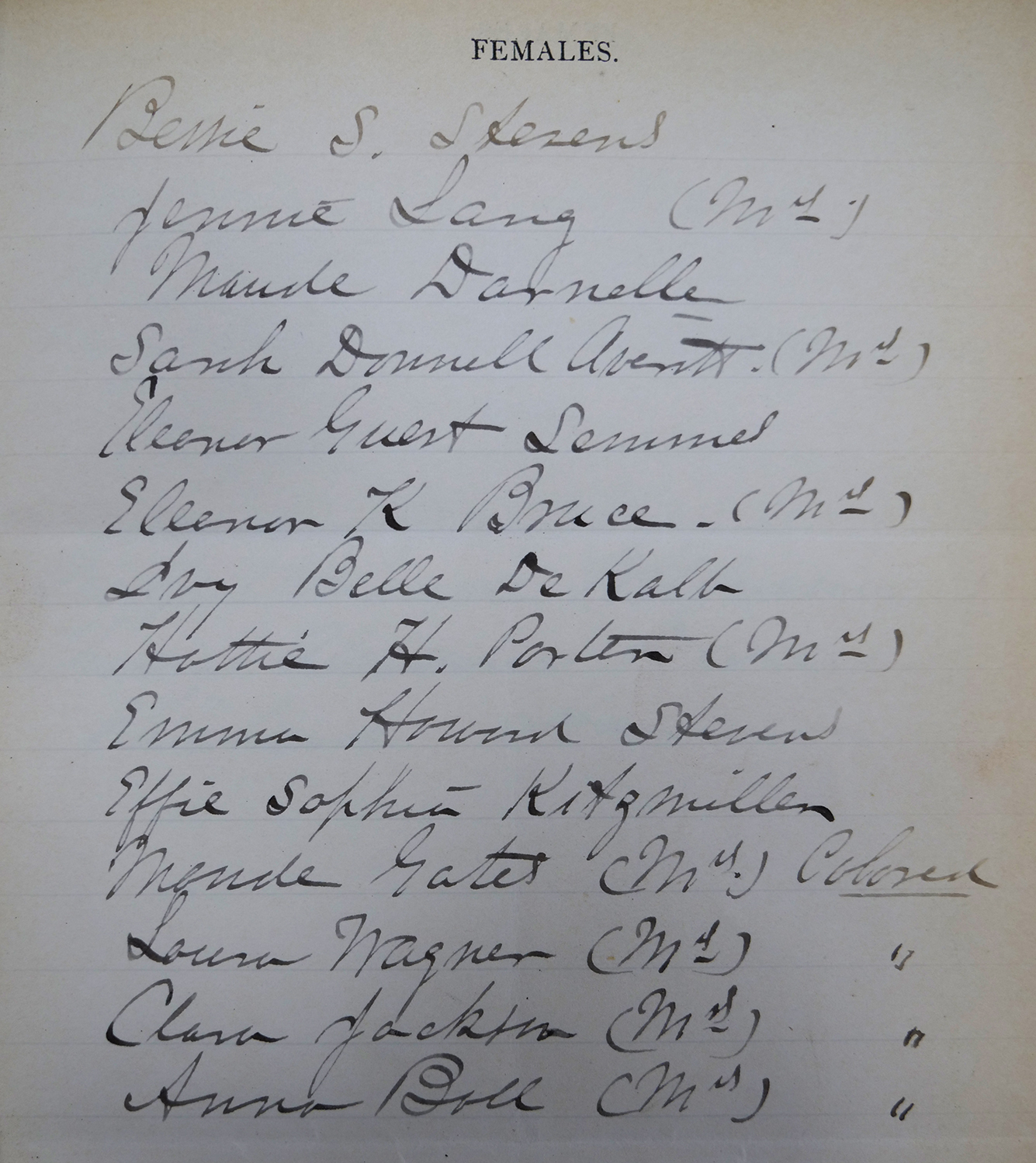 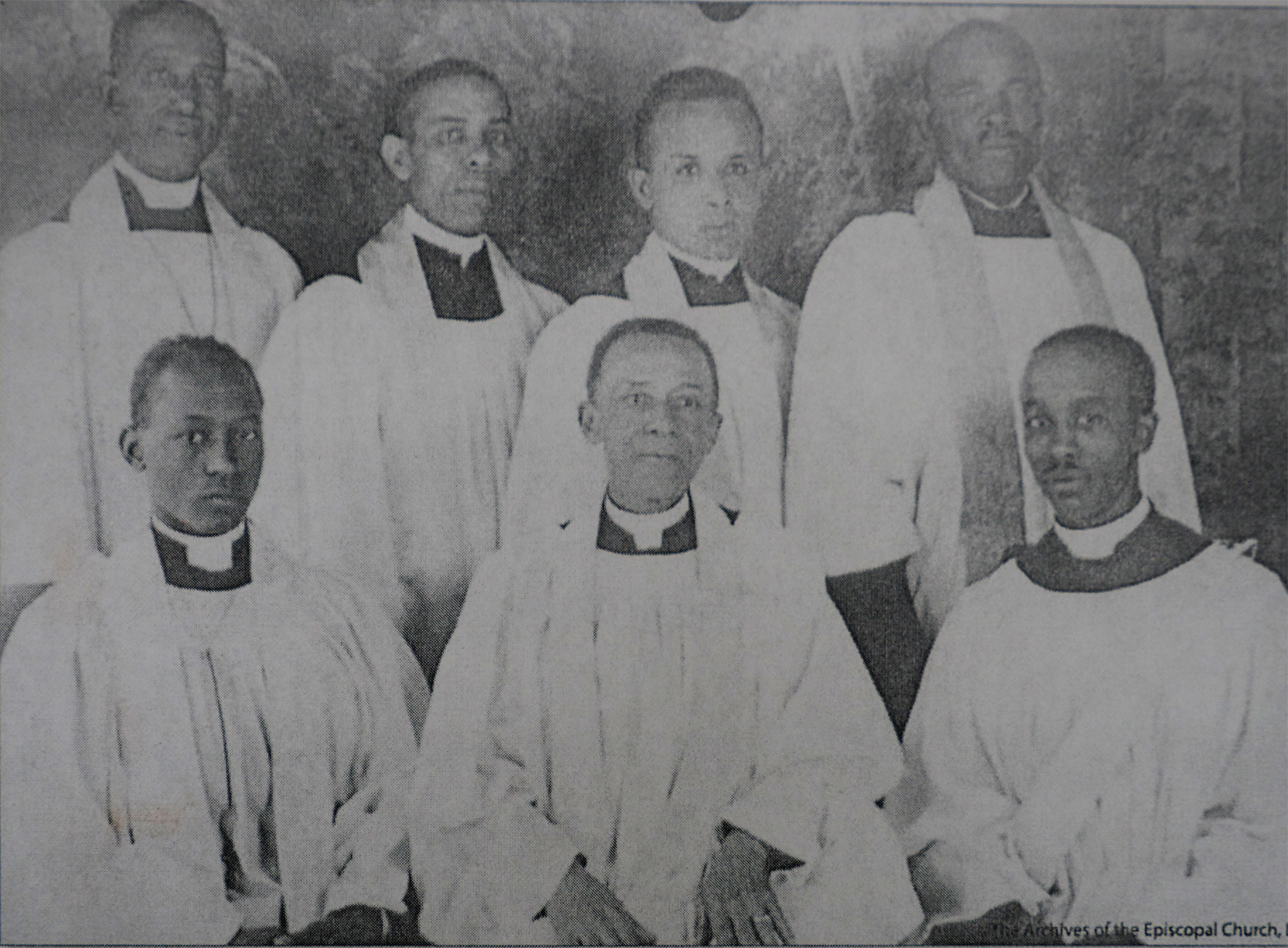 The original chapel grew increasingly dangerous to worship in, and the parish house assumed both social and worship obligations. A new brick chapel was built in 1930, for a cost of $6,000, half of which was pledged by the diocese, with the congregation agreeing to pay the remainder. On October 26, 1930, the opening service in the new chapel featured the Rev. George F. Bragg, rector of St. James’ Church, Baltimore, as the preacher. The event was made more special because of Bragg’s relationship with the new priest in charge, the Rev. Tollie L. Caution, a son of St. James’. A Tiffany window over the altar was a “gift of one of our white friends at Emmanuel Church”. The small congregation made payments on the debt for fifteen years, and finally, on November 7, 1945, the congregation was free from debt, the mortgage burned, and Bishop Noble Powell consecrated the chapel.

St. Philip’s Chapel was a vital and growing entity, which pulled worshippers from West Virginia and Pennsylvania, as well as Cumberland and was referred to as hub of the African American community in the area. Never totally self-supporting, St. Philip’s remained a parochial mission of Emmanuel, Cumberland, which legally held title to St. Philip’s property, although by 1951, the St. Philip’s congregation was paying the vicar’s salary. Mary Perry had established a $5,000 trust fund for exclusive support of St. Philip’s, which was invested and administered by the diocese.

In 1951, the possibility of buying a vicarage for St. Philip’s presented itself, and Bishop Powell supported the idea saying, “This mission is growing rapidly and, in a few years, should be completely on its own.” At that time, the diocese said it had “no cash available” to buy the property, and asked Emmanuel’s vestry to loan the diocese $9,000 for the purchase. The vestry replied that “the vestry is most anxious to help and assist the Bishop in this area, and especially increase the growth of the Church in Cumberland”. The plan eventually fell through, but both diocese and sponsoring parish agreed that St. Philip’s was certainly worth the investment. A 1953 statistic showed 120 baptized members at St. Philip’s, and 12 confirmations for that year. The next decade would prove unhappy for St. Philip’s, even though the future seems bright in 1953. 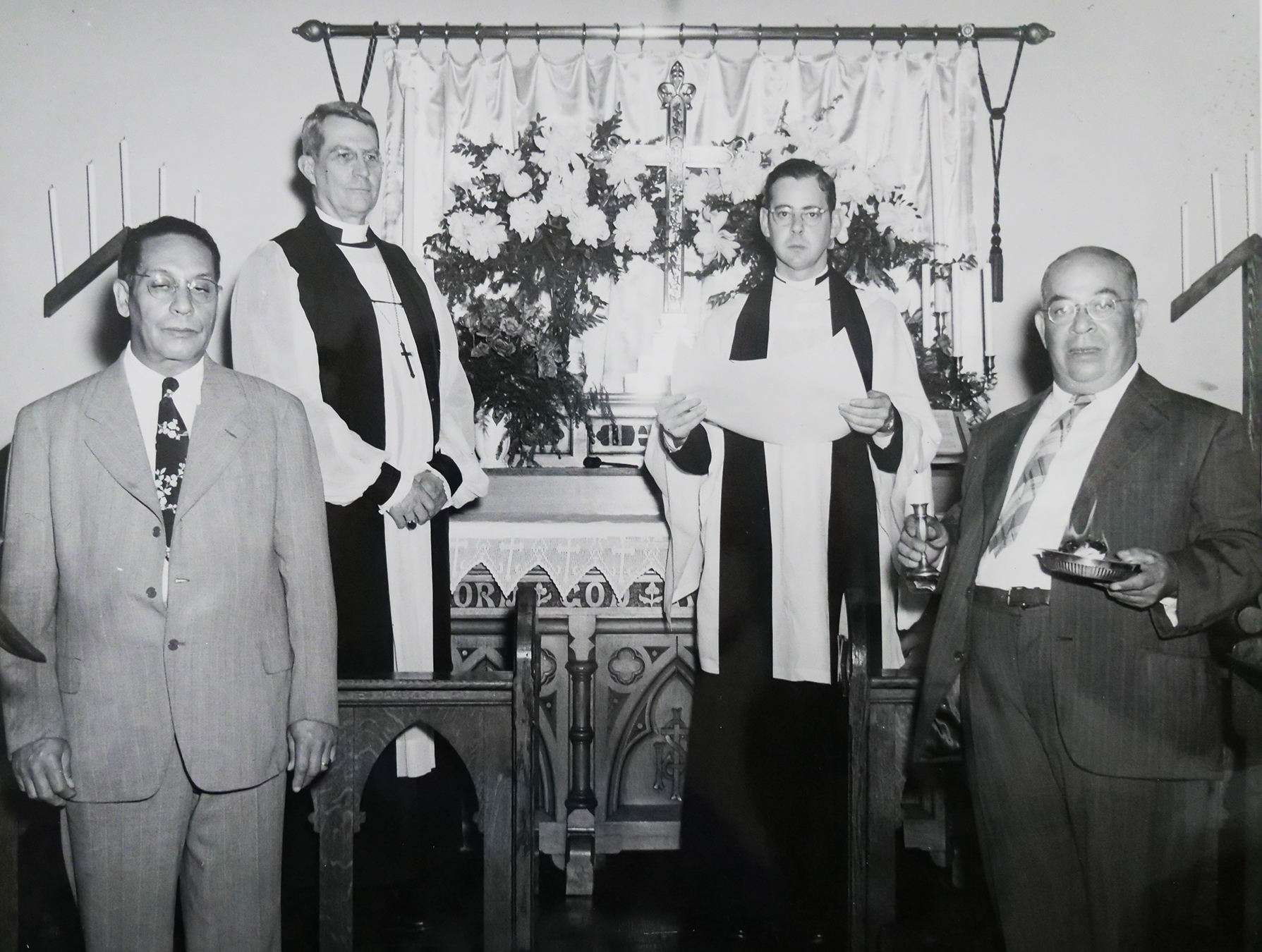 The churchwardens of St. Philip’s Church in Cumberland burned the church’s mortgage in 1946. Bishop Nobell Powell and the Rev. George Stanley Schwind, priest in charge, looked on. 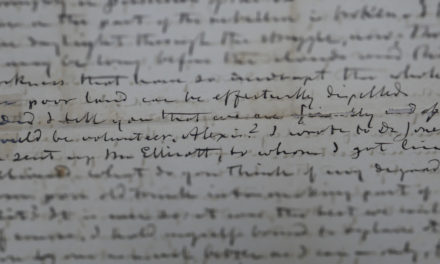 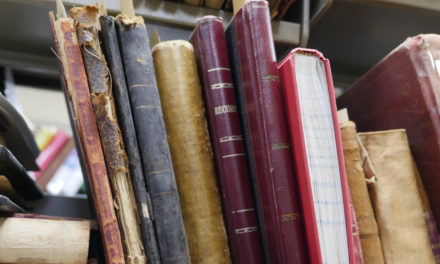 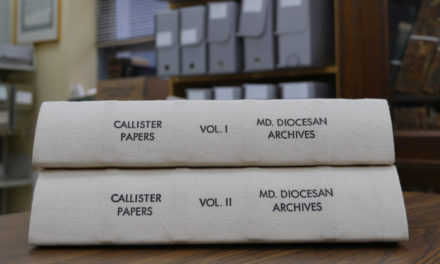 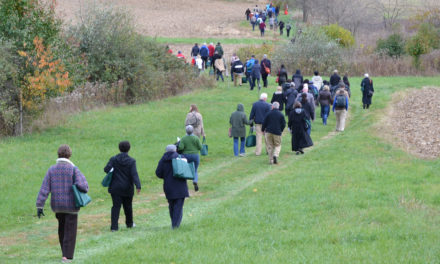