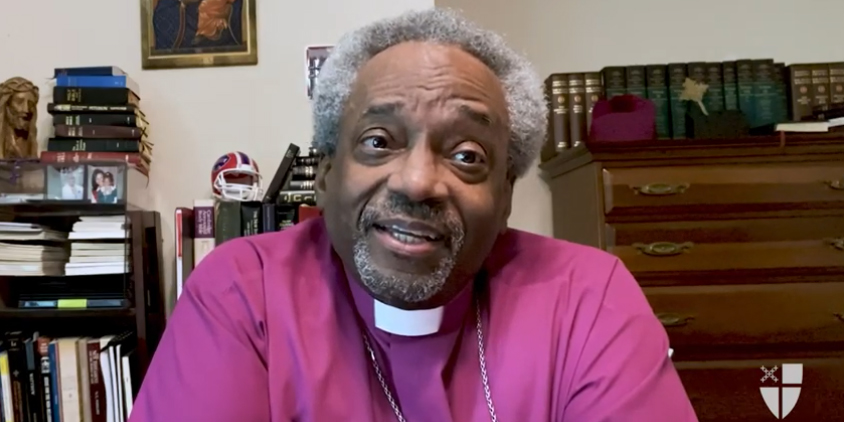 Read From the Archives: St. Philip’s Church, Annapolis, Part I

David Henry Croll was born in Jamaica, British West Indies, on March 21, 1890, the son of Solomon Henry Croll and Ann Theresa Ruddock Croll, graduating from Mico College there in 1916. After working as Headmaster of the Paous Intermediate School and Lucea Government School, he came to Baltimore in 1920, earning his B.A. from Morgan State College in 1926. After teaching at Dunbar Junior High School, he pursued ordination and was ordained Deacon in 1927 and Priest in 1928, going to work for the Rev. George Freeman Bragg at St. James’ Church in Baltimore. Mr. Bragg sent Mr. Croll to minister to the people of St. Philip’s in 1928, which counted 66 baptized persons on its rolls, and he stayed thirty-five years, until his retirement in 1962, when the parochial report listed 199 baptized persons. Not only was the Rev. Mr. Croll working hard for the people of St. Philip’s, he worked tirelessly for the whole community as president of the county NAACP,  vice-president of the Citizens Planning and Housing Association, director of the Community Chest, serving on the board of the Northwest Street YMCA, secretary of the Anne Arundel County Ministerium, and Dean of the Convocation of Annapolis. One of his memorable achievements was persuading officials at the Crownsville State Hospital to hire African Americans for their staff. While built in 1911 to care for “the colored insane”, its salaried staff was entirely white. When told by the director that he was not against hiring blacks, but none ever applied, Fr. Croll encouraged qualified persons to apply, and began lobbying officials to hire more salaried employees, as well as workers in “bread and butter” jobs. 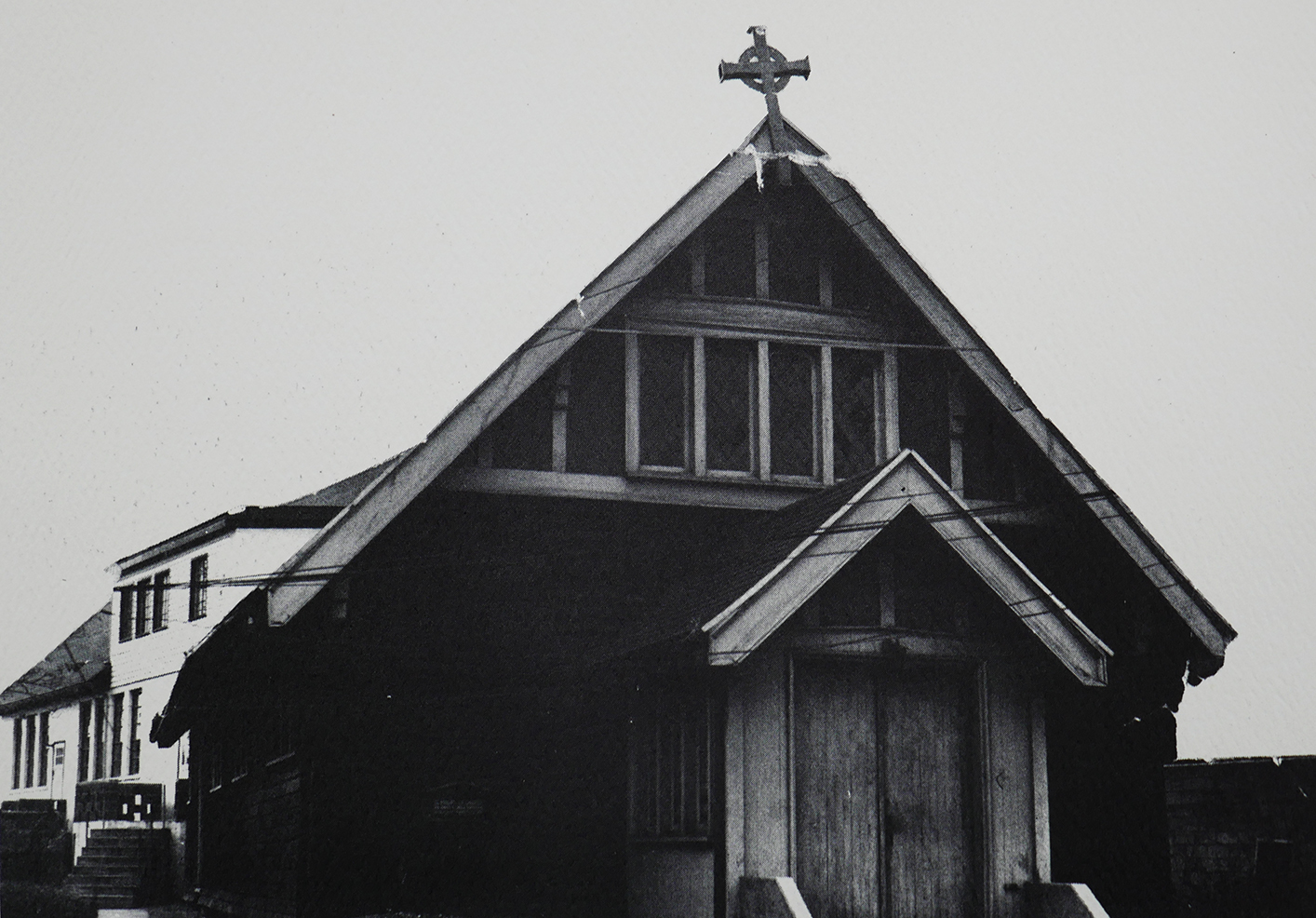 By the 1940’s, St. Philip’s facilities were showing their age. The 1887 building which had served as a school was unsafe for gatherings, and the Women’s Auxiliary of the diocese contributed funds from their Lenten offerings of 1947-1950 in support of a project to build a parish house which would also serve as a community center. Along with support from the diocese, St. Anne’s’ and the congregation of St. Philip’s, the project was finally ready to proceed in December of 1950.  The estimated cost of $37,500 was reduced to $15,000 because the architect donated his plans, and Veterans of the G.I. School in Annapolis, which trained in carpentry, bricklaying and construction, were willing to take on the job at the lower cost and build a rectory to boot. Ground was broken on May 11, 1951, and the Hall was named as a memorial to Bishop Helfenstein, who had died in 1947. Fondly remembered as the center of activities ranging from teen dances, basketball games, study groups, teas and protest marches, Helfenstein Hall played an important role in the community until 1969. The county was interested in purchasing the whole St. Philip’s property in 1965, which necessitated finding a new site for St. Philip’s. The present location on Bestgate Road was approved and the county finally bought the Northwest Street property in 1968 for $160,000. The cornerstone for the modern church was laid on November 22, 1969; the service of dedication celebrated on May 24, 1970, and the mission happily moved to its 51/2-acre site, four miles west of Annapolis. 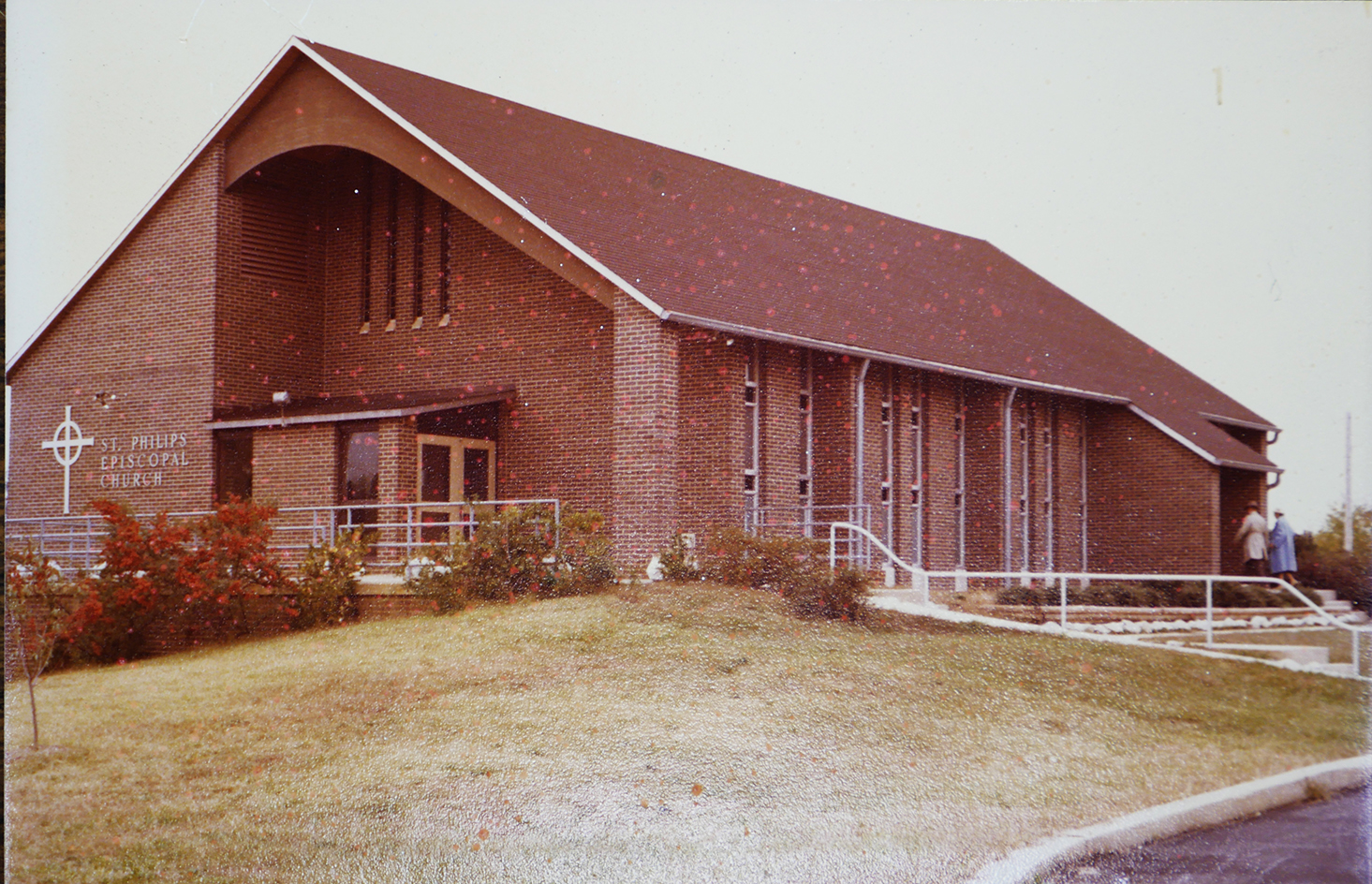 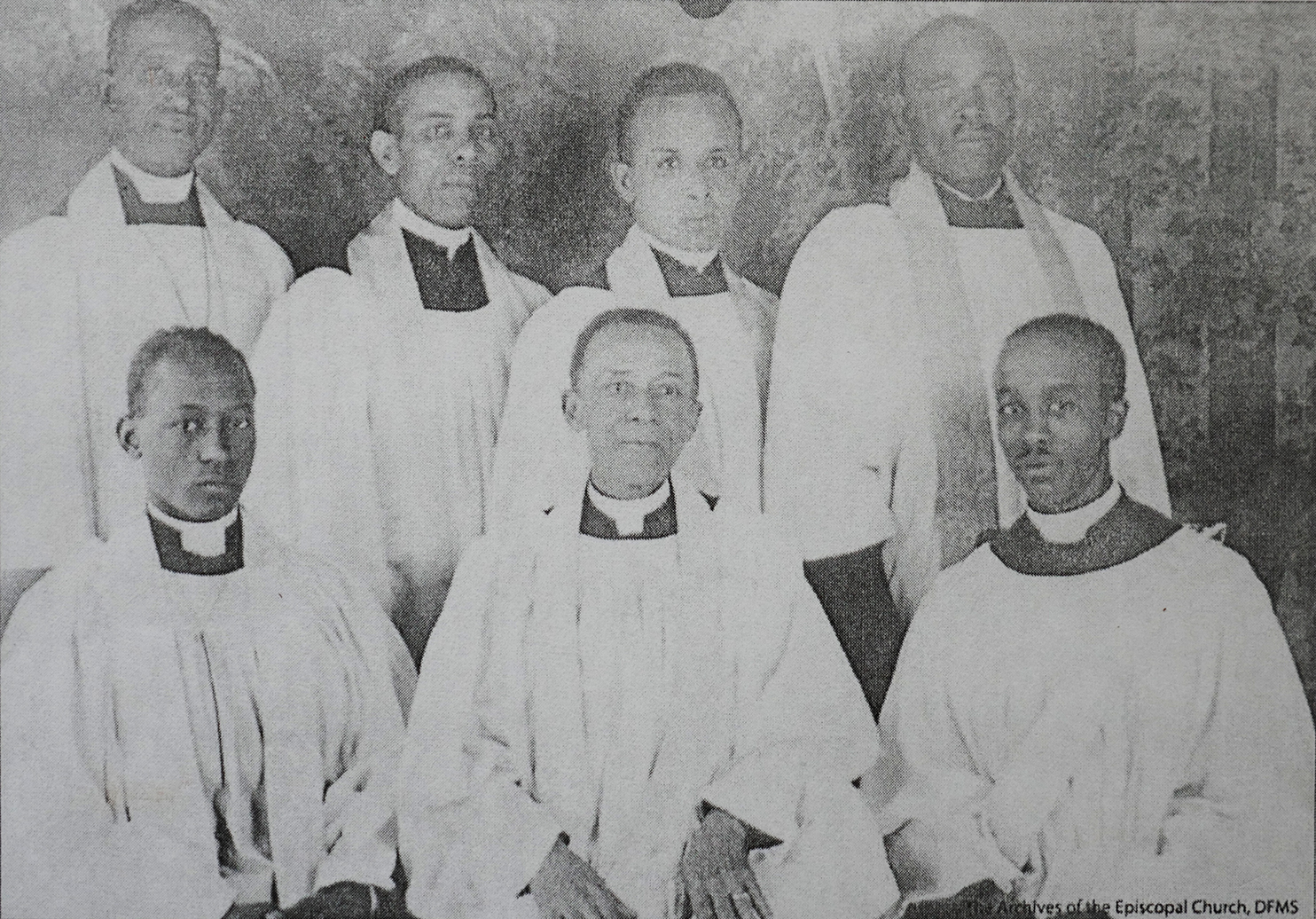 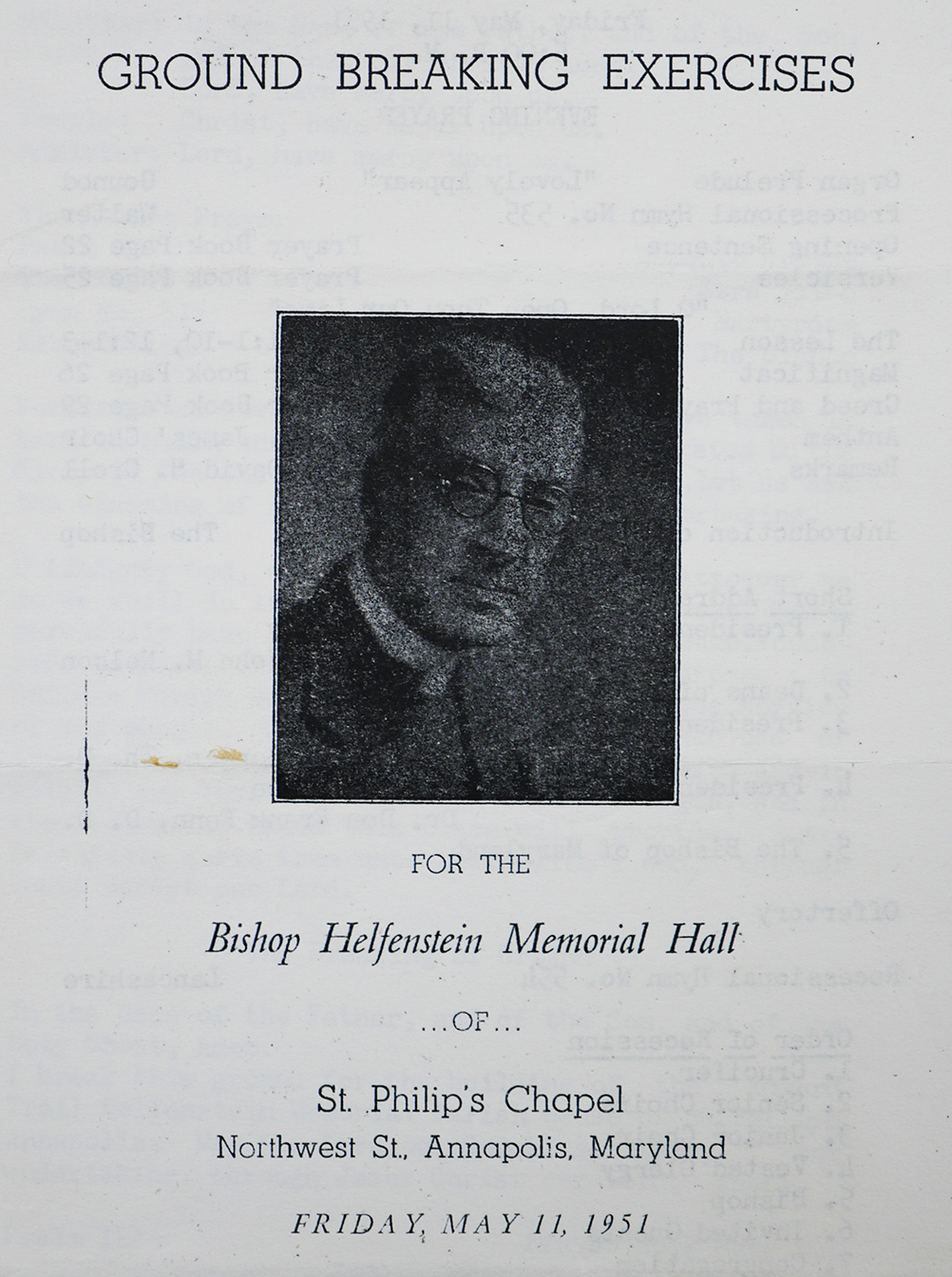 The Rev. Robert Powell became vicar in July of 1971, and the congregation entered a time of rapid growth. By 1976, its budget had tripled, and its membership quadrupled, including some white families. Fr. Powell, active in diocesan affairs, served as president of the Standing Committee, the first African American to hold that post in the diocese’s history. A big step for the congregation was becoming an independent parish in 1977, under Robert Powell’s steady leadership. He served the parish until 1997. Following David Croll’s example, in addition to diocesan responsibilities, he also served on Maryland’s State Interracial Commission, the Literacy Council of Maryland, chaplain at Morgan State university, president of the Anne Arundel County Human Relations Committee, the state Ethics Committee, and the county Board of Education.

Following the retirement of Fr. Powell, the vestry and congregation took the bold step of launching a building campaign to expand their facilities, to include the addition of a 2,466 square-foot edifice. With the call of the Rev. Angela Shepherd to be St. Philip’s second rector in September 1999, the project became a reality, and the groundbreaking took place in October for the St. Philip’s Family Life Center, which was dedicated in March 2001. A facility whose ministry is to generate and support programs and activities for the community, it is a safe place for AA meetings, the Strengthening Families program, and the Extended Educational Enrichment Experience (QuadE) and other community events.

St. Philip’s present rector, the Rev. Randy Callender, was called to the parish in July of 2012, following the Rev. Angela Shepherd’s move to become the diocesan Canon for Outreach in 2010. The present rector says he wants to build relationships through teaching and preaching, welcoming everyone, both inside and outside the church, a goal that would be recognized by his predecessors at St. Philip’s. Since 1870, the Annapolis community has been welcomed, taught, nurtured, aided and sheltered by the generous outreach and inreach of the people of St. Philip’s. 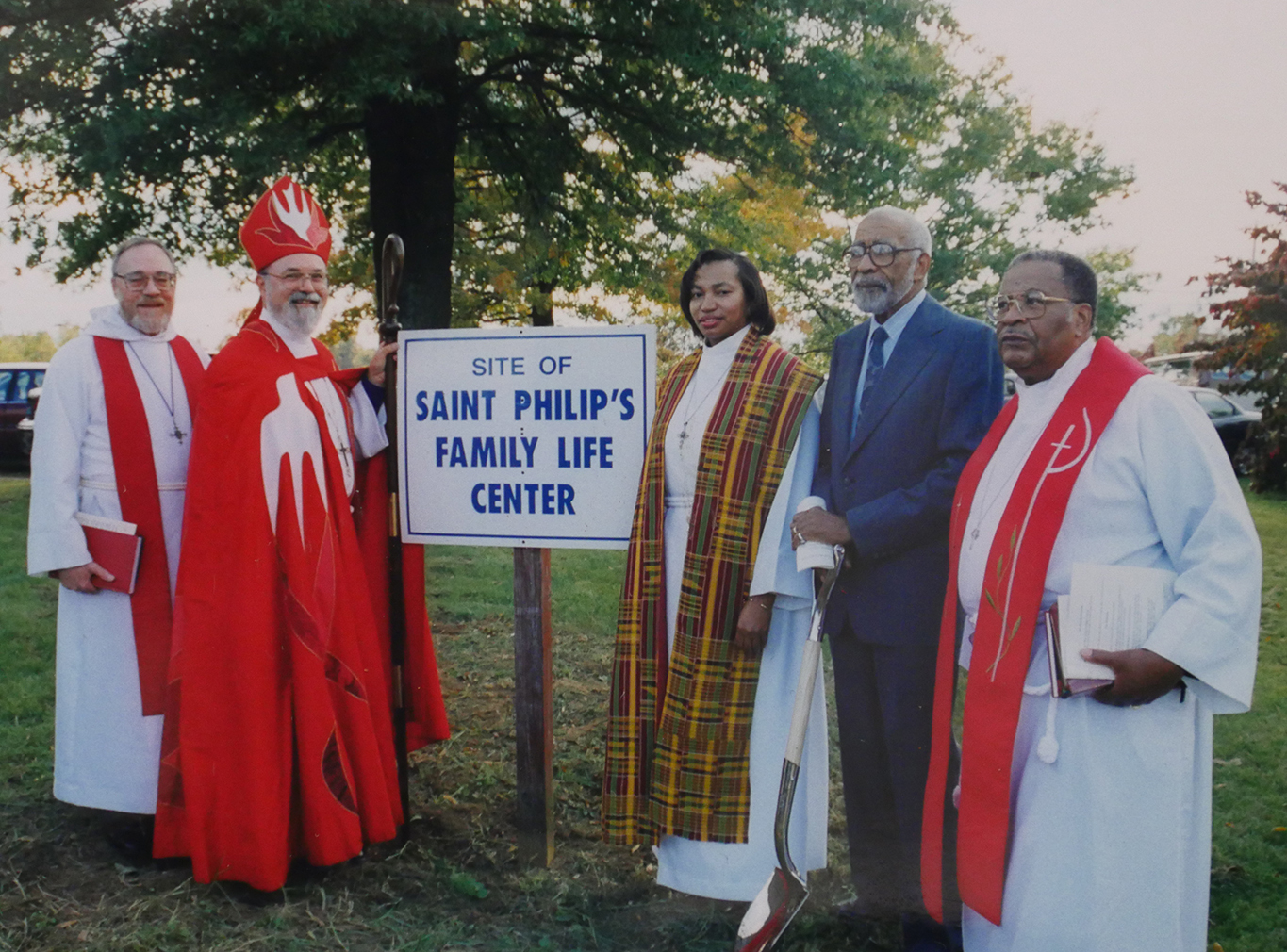